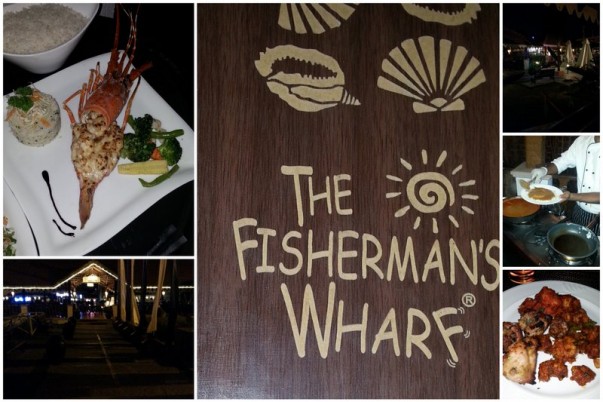 When I first heard about The Fisherman's Wharf restaurant last year, the great bustling lifestyle of San Francisco in the bay area came to my mind. I remembered the shacks selling sea food, the street artists, the area for kids, the sea lions, the view into the bay and much more. Back in Bangalore, the restaurant is modeled on the Goan ambiance and cuisine. I've been wanting to try out its cuisine for some time and finally got around to it. I felt that the restaurant is trying to manage many different themes at the same time and hence failing in their basic customer promise. I was however excited to enter the grandeur and being welcomed by a restaurant manager to a decent seat.

Sarjapur is a small town on the South Eastern outskirts of Bangalore, the Outer Ring Road leads on the Sarjapur road and the restaurant is located hardly a kilometer from this junction.

The restaurant is open from 12 PM until 11 PM. It has ample parking outside along an empty plot next door and ample seating as well. Its still best to make reservations specially for the weekend.

The Ambiance of the restaurant strikes you as you enter, it is setup as small different hutments with 8-10 tables each in an otherwise open place. There is a fishing boat creating a nice scenery, the huts have been named like Viva Carnival, Casa Anjuna etc with a Margarita Bar in the middle. They make it happening with some lively music to go with your meals. There is a live fish counter, a buffet menu, A-la-Carte menu and the day I went they were also running a special food lover's menu with exotic recipes. All was well and I really was starting to love the place.

Service is where I first got an hint that something was amiss. Basic functions for an Indian restaurant like clearing of plates, serving water and bringing the bread order just seem to take ages. I'll talk more about the food, however even with that experience and a great ambiance, I was still inclined towards a 3 star rating, but the service just got them another notch down. The reasons for the delay were pathetic like kitchen is busy, it was a weekday evening and it didn't look very busy, and this still didn't explain why the tables would not be waited promptly or water served!! I cannot imagine how they would cater to a weekend rush given that the servers were a plenty already. On my complaint the Chef and Restaurant Manager came to meet me, but nothing happened after that as well.

Its Goan experience, so ideally it should be priced reasonably in line with its peers. I can totally understand some mark up to maintain the kind of ambiance they have, but with the quality of food what they charge is just exorbitant. A meal for two with a beer each would set you back by about INR 2000 ($33). Happy hour may be some solace which runs until 8 PM everyday.

The restaurant brands itself as "A touch of Goa in Bangalore", that's the punchline, that's the model and that's what it should have been. But then you open the menu and you find Chinese, Mediterranean, Italian, North Indian and a few Goan dishes. To top it up they have a buffet, a special menu along with A-la-Carte, the choices just confused me rather than help. My expectations were set as I entered the restaurant, but they just could not live up to it. All the dishes I tasted, barring a prawn dish which used Goan kind of spices, didn't have any authenticity and were below average.

The only saving grace was a fine ambiance, and if that's what you want, check out the place, however don't go with much expectations for the food or service or for a real Goan experience.