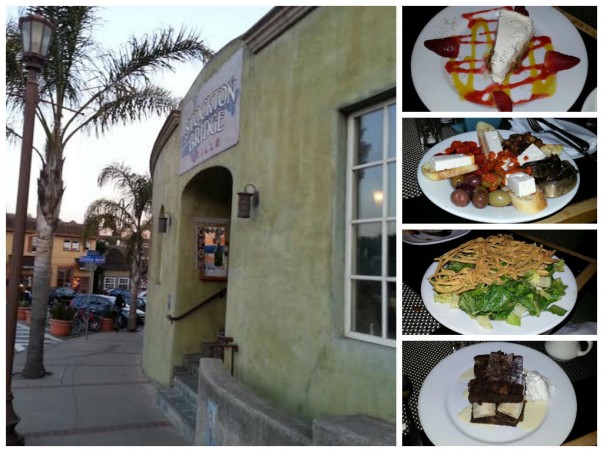 It’s important to remember that, at the end of the day, restaurants are businesses. Not everyone can be (or should be) Thomas Keller. Foodies are, for the most part, pretentious clowns. And sitting around writing about what I inserted into my piehole in a restaurant is a hell of a lot easier than actually running the place – getting it to make a profit, provide jobs, build a brand and consistently deliver value for the money to people who have to work very hard to get it. The Stockton Bridge Grille does this. Everyone should be grateful, and go there.

It’s a nice place. It’s tucked into a sort of mini-fortress that overlooks the inlet from Monterey Bay at (wait for it) the Stockton Street Bridge. There’s a small dining room, a small outdoor patio that overlooks the beach and the faux Venice houses of Capitola, and a remarkably unobtrusive sign. The place looks like it used to be something else, then got turned into a restaurant.

But it’s a very good place. Reasonably priced, pleasant, good food. And I doubt you’ll be this lucky, but a nice evening was topped off by the incredible good fortune of bumping into someone with a telescope from the Santa Cruz Astronomy Club who showed us breathtaking images of the moon, Jupiter and its moons, and the nebula in the middle of Orion. Cosmic after-dinner entertainment indeed.

The Stockton Bridge Grille is right in the middle of downtown Capitola. Parking is really difficult, particularly on the weekend, due to the twisty little streets, crowds and limited space. Be prepared to hunt, bring change, and also be prepared to end up at the big municipal lot on top of the hill and hike down.

Small, quiet, professional and very pleasant. Brightly painted walls, tile floor, and windows with a lovely view of the beach.

Not bad. $89, including dinner, appetizer, two drinks for each of us, dessert and coffee.

Good, middle-of-the-road semi-Italian. This stuff isn’t going to send you into ecstasies of culinary overload – this isn’t that kind of place. However, you are going to get a really good meal, and a extremely pleasant experience for the price.

For an appetizer, we began with the Mediterranean plate. This was a big plate with domestic feta, grilled portabella, marinated olives, roasted red bell peppers, and bread. Everything was good. This is sort of an example of what I was talking about earlier. I’ve had feta cheese in Italy (for breakfast, actually). It was incredible, and a whole different experience than having it in the US – creamier, fresher, more flavorful and just plain better. However, Capitola California isn’t Venice, you’re paying ten bucks for this appetizer, and it’s a screaming bargain.

The first entrée was a simple Southwest Chicken Penne. This was a variation on a classic chicken penne paste, made with grilled chicken tossed with caramelized onions, roasted red bells, and corn in a chipotle pesto cream sauce. There are a lot of ways to mess this up – the pasta can be undercooked or overcooked, the chicken can be either dry or mushy, the vegetables can overpower the sauce, the pasa, the chicken or all three, or the whole thing can just be kind of a gloppy mess. The Stockton Bridge Grille avoided all these mistakes. It was a nicely-balanced dish, with corn and peppers as an accent, but a traditional penne base, including a sauces which was light instead of gluey. Well done.

The second entrée was a peanut chicken salad. This was constructed of romaine, red and green cabbage, warm grilled chicken and peanuts, tossed with peanut, soy and ginger dressing. This was a great balance of healthy and decadent, with a lot of peanut and chicken – satisfying, without being unhealthy. A good choice.

We had two desserts, which is a little unusual. Mine was a banana bread pudding, served in a Grand Marnier cream sauce. It was nice – I’m always astonished at the variation in bread pudding. It can be anything from a bowl full of bread drenched, basically, in cream, sugar and butter, to a kind of brownie to a kind of cake. This was more cakelike, with a banana included, and a nice hit of Grand Marnier anchoring the thing. Nice job.

The other dessert was cheesecake – the world’s simplest dessert, gussied up in this case with goat cheese, cream cheese and sour cream and a mango coconut crust. As often happens, this was also decorated with sauce, what looked like nutmeg and other pretty stuff. It was good also.

And then we finished, walked out into the cool night under a full moon, and encountered a little guy with a hoodie on and what looked like a semi-homemade telescope. And you climb a little ladder, put your eye to the lens, and what floats into view is Jupiter, and you learn that it’s something like five hundred million miles away. That’s it’s the biggest planet in the solar system by far, but mostly made of gas. That those three little visible dots floating near it are the moons which got Galileo in trouble. The the little hoodie-wearing guy is practicing something called “sidewalk astronomy”, sort of busking with stars, which was invented by John Dobson, who just died and is thus up there somewhere in the stars. And you walk to the car, giving other people a chance to see the miracle, and drive home and go to sleep.

« Things to Do in Sao Paulo, Brazil Things to do in Recife, Brazil »
One Comment