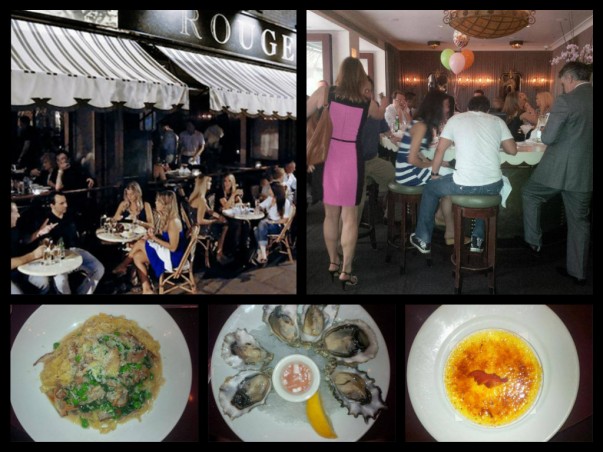 Review of Rouge Restaurant in Philadelphia

The meal was excellent. However, a great deal else about the restaurant was either neutral, or actually unpleasant. This, plus the hefty price tag ($118, before tip) leads me to give this place only three stars. Maybe, as an author I love once put it, I’m turning into a cantankerous old dog rather than remaining a friendly young one, but Rouge is the kind of place that’s considered wonderful either by people who don’t get out a lot, or who think Center City Philadelphia is the equivalent of Paris.

Rouge was originally (like, a decade ago) The Hot Restaurant in Philadelphia. It was the first one on Rittenhouse Square, it had tables on the sidewalk (although the sidewalk is really too narrow for this) and after The Palm, which is a businessman’s steak place, it was the place to see and be seen among the big shots of Philadelphia.

Of course, this led to some unfortunateness. The owner ended up in jail for tax evasion. The place, which was never designed as a restaurant in the first place, is cramped and noisy. Oddly, the bar, which is circular, is right smack in the middle of the room. And the entire operation is seeming a little frayed around the edges.

Rouge is right smack in the middle of Center City Philadelphia. It overlooks Rittenhouse Square. This is an urban location with zero parking. You have three options, essentially. If you’re coming in from the suburbs, take the train to Suburban Station and walk over. If you’re already in Philly, take a cab. Or, if you’re deeply unfortunate or just plain dumb, find a parking garage, and be prepared to pay $30 or so for parking. It is also, however, right next to Walnut Street, which is Philadelphia’s best, most upscale and most interesting shopping area. So there’s that.

I hated this place, ambience-wise. First, it is LOUD. Because there is a bar in the middle of the room, there is an enormous amount of crowd noise, which is helped along by speakers in the corner, turned up high and emitting bad techno music. This made it hard, towards the end of the meal, to even hear what was being said across the table from me.

Second, the tables around the perimeter of the room feature banquettes upholstered in some kind of weird, slippery faux-velvet material. My dining companion was my fifteen year-old daughter, Amelia, who would gladly sit on a board, and was actually sort of grossed out by this stuff. The place is done up in a velvet-fabric-mirrors-and-chandelier style, which looks dated and still fails to absorb the huge volume of noise.

Finally, it’s at least partially a pickup joint, which gives it a fairly ugly, breeding-pen feel. During our meal, the aforementioned dining companion leaned across the table and said to me “Dad, that guy has his hands up that woman’s dress.” I turned around to look, and said “You mean the women in the panel dress, or the one in the stripes?” I.e., there were at least two women standing at the bar who were sort of like Eighties porn stars, and lots of guys with hair products, blazers and complicated drinks with names. And a completely random selection of characters, from guys with jeans and t-shirts to women obviously straight from work at the law firm in dresses. Stay classy, Philadelphia.

Not bad, but a little disorganized. The entrée arrived right on top of the appetizer, and the after-dinner espresso didn’t arrive until about two minutes before the check. On the other hand, our server was quite patient and nice about a fair amount of menu-confusion from us, which was great.

Not cheap – $118, including drinks, two appetizers and two desserts. Portions are very generous.

Very good. Expertly done, nothing too fancy, everything obviously prepared by pros. Properly prepared, but not too imaginative or creative, either.

The first appetizer was a shrimp ceviche, which is a kind of seafood salsa. It’s a combination of coarsely chopped shrimp, tomato, lemon, spices and so on, scooped up and eaten on a large chip – think of a high-end Dorito. It was great – the shrimp was plentiful and fresh, and Amelia ended up trading her appetizer for this, because she thought it was so great.

The other appetizer was oysters. Just plain, simple, raw oysters, served on ice. No cooking required, but what is absolutely required are fresh, cold, high-quality oysters, which these were – straight from Chesapeake Bay. This alone is worth a separate story – these things were almost harvested out of existence, and a joint program between the watermen of the Bay and the government has replenished them. They’re big, creamy, buttery oysters – wonderful. Simplest and best appetizer there is.

My entrée was a perfectly roasted half-chicken, served on mashed potatoes with spinach. Again, simple, expertly done and very good. The chicken was crispy on the outside, juicy on the inside, and the potatoes tasted unbelievably rich, which is a great thing. Yay mashed potatoes.

Amelia had duck fettucine. This was homemade fettucine, prepared with duck confit, peas, wild mushroom, spinach and parmesan. The noodles were excellent – rich, buttery and obvioiusly homemade. The duck was used a little sparingly, and the mushrooms were used a little generously, but overall, it was a rich, satisfying dish and perfectly done.

Dessert was a simple crème brulee, Nicely done – it’s fairly hard to screw up crème brulee, although the ramekin dish it came in was unusually shallow and wide. This made it look much bigger than it actually was, and also made it sort of difficult to eat.

All in all? Decent food, nothing spectacular, in a fairly uncomfortable, very annoying atmosphere. Maybe we would have enjoyed it more if we had eaten outside. Oh, well.