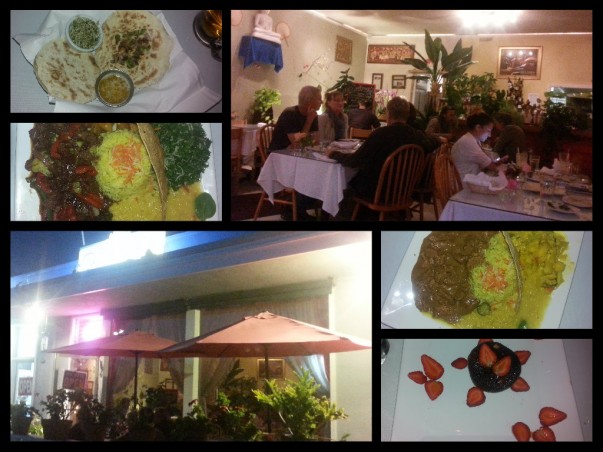 Review of Pearl of the Ocean restaurant

After you’ve done it enough, reviewing restaurants becomes, unsurprisingly, a little predictable. Preparing and serving food is, after all, a business. There are best practices, like in every business, and categories into which restaurants fit – Mexican, high-end French, the dinner-as-exciting-experience place, and so on.

What really makes this work worthwhile, however, is the rare occasion when you either encounter food that’s so amazing you cannot figure out how it was prepared, or when you encounter a restaurant that’s so unique, so personal and so obviously an expression of someone’s values that you leave knowing much more than you did when you arrived. Pearl of the Ocean is a place like that. When I ate there, I met someone fascinating.

From the outside, this place is a total hole in the wall. But it’s also the work of Ayoma Wilen who is the owner, chef, and guiding spirit. Apparently she doesn’t really care if she makes a lot of money, or if the restaurant grows, or if it fits into any category, or if tourists find it. What she really cares intensely about, is cooking. I believe her. Hence, five stars. The food is amazing, and the atmosphere is completely unique.

Pearl of the Ocean is on Water Street, in an impressively dumpy lot, next to a frozen yogurt stand. That being said, it’s also got a parking lot, so parking is not a problem.

Santa Cruz is Hippie Central. A lot of restaurants and homes and other establishments around here have a semi-hippie ambience – lots of vaguely Buddhist/Eastern artifacts, tapestries, indirect old-fashioned lighting, and so on. When it’s done wrongly, or as sort of a cliché, it feels sort of dirty and claustrophobic and stupid. When it’s done properly, it feels like the most welcoming, friendly, comfortable place imaginable. Pearl of the Ocean is the latter. Despite being a small room, and completely unadorned by anything expensive or nice, it really feels like you’re sitting in Ayoma’s living room. It’s wonderful.

Very bad, but in a way you will love if you have any sense. Again, like a couple of other places around here (think of Caruso’s, in Capitola) this is one person’s turf. She runs this restaurant the way she wants to, and that means certain, uh, irregularities. For one thing, after we’d finished our meal, we sat there for twenty minutes waiting for our check. Normally, this drives me absolutely berserk. Lots of restaurants do this, and it’s unbelievably irritating.

In this case, however, Ayoma was sitting and chatting with and feeding her boyfriend, who had just showed up. Her colleague was sitting at the table next to me, chatting with some customers who were also friends. Besides that, the place was empty. If we’d asked, either one of them would have jumped up and gotten the check. But, hey, they were talking with friends, and so it turned out to be no big deal.

Another seemingly-bizarre-but-actually-really-charming thing that happened was that while she was serving dessert, Ayoma stood by our table and delivered a passionate lecture about her philosophy of cooking. Now, mind, you, this was the first time we had ever set foot in the place. We had asked some questions about what we were eating, the restaurant, and so on. And based solely on that, Ayona get very animated, and basically said the following:

And she was absolutely right. We had a big meal, including two pretty serious desserts, and drinks, and when we got up from the table, we were not sleepy or full. We were not hungry, but we were not full.

Now, maybe this is all schtick. Ayoma is very beautiful – high cheekbones, big brown eyes, this enormous mane of black hair – so perhaps this is all a version of “Charm the White Guy”. But the wall of this restaurant is full of awards she and this restaurant had won, the meal was absolutely amazing, and I believed her.

Moderate -- $83 for two, including drinks and dessert.

Absolutely terrific, but unfortunately, I don’t have the vocabulary to really describe. I can try, however.

For the appetizer, we split an order of Sri Lankan coconut roti.  Similar, sort of, to naan, this is bread with coconut, bell pepper and green onions served with a butter garlic emulsion dip and green chile sambal – think of a combination of spices/ingredients, that the butter helps hold next to bread – kind of a mueslis. The bread is creamy, sweet and moist, and extraordinarily flavorful.

One entrée was Tikka Masala – chicken served in a spiced cream sauce. This typically is underspiced and overgloppified in Indian restaurants – it’s very rich, but it doesn’t have a lot of complexity, texture or depth of taste. Not here. The chicken was perfect, and the sauce was extraordinarily rich and complex and interesting. One fascinating thing about Pearl of the Orient is the sheer amount of time and effort that must go into preparing these dishes. It’s mind-boggling, and it happens every day.

My entrée was a special, which included beef, Brussels sprouts and a whole host of other ingredients. Frankly, this was so unusual, and so good, rather than going into the details of its composition, I can just urge you to try it. This dish, by the way, was served with two equally amazing side dishes. One, kale and coconut, is an excellent example of the way Ayoma cooks – there’s actually a demonstration of it on Youtube. Essentially, she takes kale, chops it very slowly and carefully, and sautees it in a pan with olive oil, salt, coconut and spices. The result is impressive and delicious, and as she pointed out to us during her min-lecture, it’s still very green, very fresh, and thus, very nourishing.

Dessert was about as Sri Lankan as chicken-fried steak. I had a chocolate cake, which was wonderful – rich, creamy, and amazing. Beth had Watalappam, which is aSri Lankan coconut custard with cashews. This dish is not custard in the Western sense – it’s more like a flan. It stands up on its own, and presents beautifully, with a garnish of sliced strawberries.

This is a one-of-a-kind place, with wonderful cuisine and is a genuine expression of a very talented, motivated person’s values, philosophy and work. Five stars.