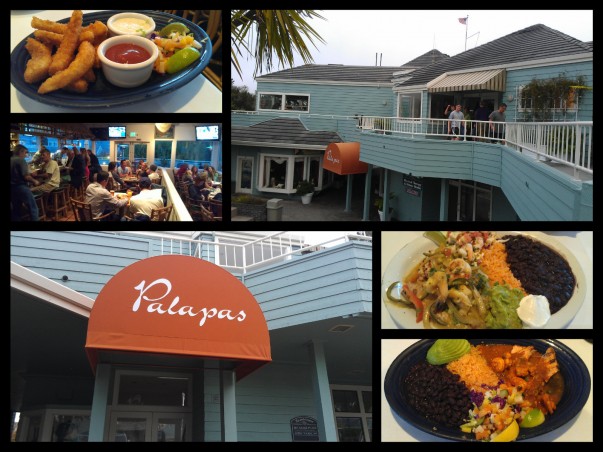 Palapas may be the best Mexican restaurant in the Santa Cruz area. The food is terrific, the atmosphere is lively, fun and smart, and the staff is great. Here’s an example:

When we ate there, we were at a two-person table right next to a big group – what looked like a multi-family dinner, with fourteen people. They had a nice, long meal, and when they were done, the table was absolutely destroyed. I counted over twenty empty/dirty water glasses, for example. It would have taken me a minimum of half an hour simply to clear that table. Nobody had done anything nefarious, but for a group that big is going to create quite a mess, which there was.

It took the staff at Palapas exactly five minutes to completely repair the damage. It was amazing. I’m always fascinated by watching professionals work. A server, a busser and the hostess, who was wearing a long, tight skirt and really nicely dressed, absolutely attacked the dirty table. Cups, plates and everything else were bussed. Dirty linens were removed. The tables were repositioned to make two smaller tables out of what had been one big one. Fresh linens and silverware appeared. Even the carpet was quickly cleaned up, using a carpet sweeper.

And just like that, the job was done. Two new parties appeared. And the tables were back in action. That’s kind of how this place works. They’re good – and it shows.

Palapas is in the Seascape Village Shopping Center, right across Sumner Avenue from Seascape Resort. There is lots of free parking, but you are going to have to climb stairs to get into the restaurant, as it’s on the second floor.

Dinner nightly from 17:00 until 22:00. Calling and double-checking is highly recommended, however, as hours are not listed anywhere online. In fact, for this nice a place, the website is definitely second-rate, which is unfortunate.

Nice Mexican tropical. The place is definitely busy, but the big open space is broken up by low white walls, with blue tile embedded in them. The overall look and feel is of a palapa, as the name suggests, which is a Mexican dwelling with a thatched roof but no walls – an open-air hut, really. There is a very lively bar in one corner, and patio dining. The whole place is wrapped in windows, which furthers the impression of openness.

Not bad -- $100 before tip, including a shared appetizer, drinks and a shared dessert.

The food is great, and really, really fresh. We started with a shared appetizer of Calamari Empanizado – fried calamari with dipping sauce, basically. This was sort of a high-risk choice, because fried calamari is a staple in a lot of restaurant. It’s cheap, it’s easy to make, and it can be absolutely disgusting – oily, heavy, and awful. For instance, I wouldn’t recommend the calamari in the Seattle airport. Interestingly, “Calamari” is an Italian word – the Spanish version of the same thing is “Calamare”. I guess Palapas figured their customers would be familiar with the former, but not with the latter.

Anyway, it was wonderful. Hot, tender, with a substantial amount of calamari – not buried in breading – and delivered with a scoop of Palapas’ wonderful ceviche. The calamari was also tender – often it’s ridiculously overcooked, which gives it the texture of a pencil eraser, but not this dish. Good stuff, and with a beer, a fantastic beginning to a meal.

My entrée was a seafood special – salmon with prawns, in a tomato-based sauce, with beans, rice and a scoop of ceviche. Everything was absolutely fresh, and the dish was amazing. Salmon, in particular, isn’t easy to make correctly – it tends to either be dried out, which can be fine if it’s seasoned properly, or be watery and tasteless. This was neither.

Beth had the other seafood special, which was essentially the same, except made with Mahi-Mahi, and in a sauce based in tomatillo rather than tomato. This description doesn’t really do it justice. Her dish consisted of Hawaiian yellowtail and Hawaiian mahi-mahi with sauteed onions and peppers and a tomatillo sauce topped with jumbo gulf prawns, accompanied by a light and tangy ceviche with rice, beans, guacamole and served, as was mine, with tortillas.