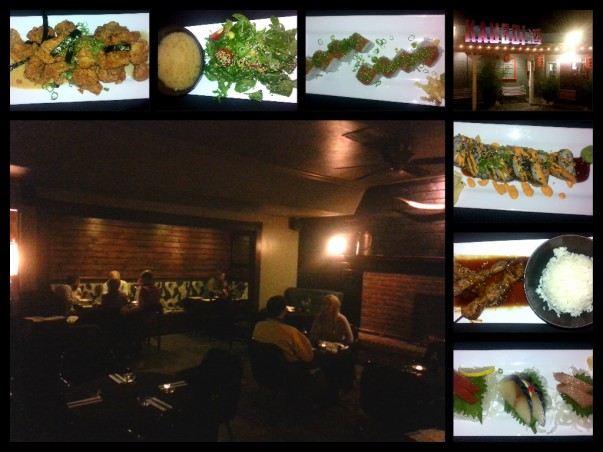 Kauboi doesn’t really work. It doesn’t even seem as if they’re trying that hard. Oh, well.

The name (say it out loud) is sort of an inside joke – the place is kind of an Asian fusion establishment, except that’s what’s fused is Japanese food and some kind of Texas cartoon aesthetic. Hence, you have low tables, Japanese lanterns and Japanese food, combined with a steer skull over the fireplace (the kind of things fat guys in Texas mount on the front of their Cadillacs), cow-print couches, and American steaks on the menu.

If this was done really carefully, or really well, it might work, but here it doesn’t. The food isn’t that great, the service isn’t that great either, and finally, Japanese food is about careful, finicky, expert preparation of small dishes. From where we sat, you could look through an opening to the kitchen, in which were Mexican guys working in no major hurry, with baseball hats on backwards. I’m surprised they weren’t smoking.

Kauboi is in Soquel, in the location of the old Soquel Brittania Arms pub, which has since moved to Capitola. They had some kind of landlord situation, which is why they moved, but the place was a much-loved spot to have a beer and fish and chips after hiking in the Forest of Nisene Marks. It’s unfair, I know, but if you loved the Brittania Arms, a visit to Kauboi will make you mourn its departure. There is, however, a parking lot, so that’s something.

The night we went, the place was kind of empty and quiet. It’s very dark – there are no windows in the dining room – and the tables are low – sort of a hybrid between a genuine Japanese place and a Western place. Décor is minimal also, with little decorative touches around that combine Western (stack of paperback Western dime store novels) and little Japanese objects (lamps). Kind of creative, but the forced combination of Western stuff and Japanese stuff is really kind of odd. Plus, I got the distinct impression that the staff was sort of phoning it in – as one example, the music that was playing was a collection of FM radio’s greatest hits – we heard the Grateful Dead, Tom Petty, and the Temptations, among other things. Not too Japanese, but I’m sure it kept the serving staff happy.

Mediocre. First of all, it’s slow – there were only three tables with diners in our section, and it took the server a long time to do much of anything, despite the lack of customers. He also seemed kind of irritated by the fact that we were there and he had to deal with us. I mean, really, smile, dude – this isn’t prison.

Moderate -- $87, including drinks and one extra small place, but no dessert. Portions are small, as befits a Japanese place.

The food is sort of moderate. It’s not awful, but it’s no amazing, either. Squarely in the middle, and uses a lot of the kitchen tricks that dress up what are ultimately some fairly inexpensive ingredients.

For an appetizer, I ordered chicken karaage, which was described as “served with three sauces: honey mustard miso, sweet and spicy hoisin and ginger basil lime”. While not bad, this was basically an elaborate version of Chicken McNuggets – chunks of chicken breaded in some kind of spicy mixture, deep-fried, and served up with three sauces. The plate was pretty, the sauce was okay and the chicken was fine, but this wasn’t anything to write home about.

The first entrée was yakitori, which arrived with rice, miso and a salad. It was fine – correctly grilled, and with a nice teriyaki sauce on it. One big plus is that the beef wasn’t overcooked and hence dry, which happens a lot when cooking on skewers. This is easy to disguise by hosing it down in teriyaki sauce, which thankfully, Kauboi (that name is really starting to irritate me as I write this) didn’t do.

My entrees were a couple of rolls – the Lemonheads roll (salmon with lemon slices, fresh dill, pickled ginger, and cream cheese in a tempura fried roll). This was good, although I’m not a big fan of cream cheese in Japanese rolls. That, plus the tempura-fried part made this thing a little too rich and a little un-Japanese, but overall, a decent effort.

The second roll was the Little Richard -- spicy tuna, mango, tobiko, cream cheese, green onion. Again, cream cheese, but the mango set if off nicely. Not bad, but the name is sort of stupid – Little Richard? Really? “A whop bop-a-lu a whop bam boom.” I don’t think so. Not cowboy, not Japanese, just a random insertion of a rock-and-roll reference.

Finally, because I’m a big guy and I eat a lot, I ordered a sashimi plate, which arrived with tuna, which was also a bit of a letdown. It had clearly been frozen – which is not a big shock, almost all sushi is – but the result was sushi that wasn’t that great. It was kind of grainy, lacked flavor, and just didn’t feel or taste like good sushi should.

Kauboi is, in the end, a half-clever idea that isn’t executed especially well. In my opinion, to pull something like this off, you need to get all the details exactly right, and they simply don’t.

« Extreme winter sports in America for a lover of winter Olympics Pearl of the Ocean, Santa Cruz - Restaurant Review »