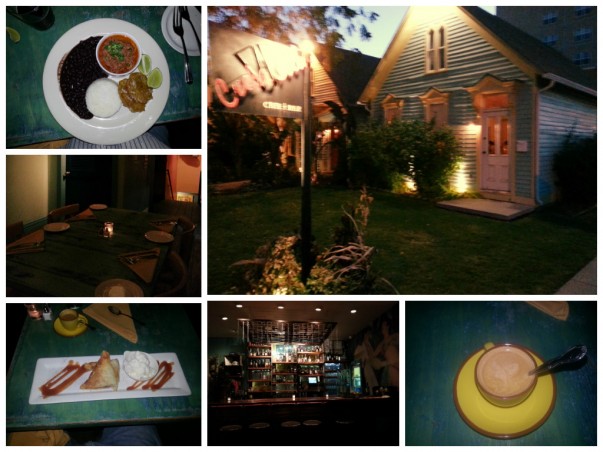 Thanks to the trade embargo, Cuban culture is something that Americans, unless they happen to live in Miami, probably know zero about. There are lots of stereotypes, of course, and lots of generalizations, but Cuban food, unlike, say, Mexican or Italian, is one of those big blank spots on the map – the place nobody knows, or does, much about. What it turns out to be, however, is fascinating. Cuba is a semi-isolated island country of 11 million people that contains elements of basically all of the massive cultural melting pot that is the Caribbean. It has the flavors and techniques of all these places in its cuisine, which is inventive, flavorful, and utterly unique. Cuba Cuba’s take on it is also really, really good, which is even more surprising given that it’s located in Denver, Colorado. Denver was originally a cow and railroad town, and it has that atmosphere of spaciousness that comes with having the Rocky Mountains on one side --- literally in sight most of the time – and the Great Plains on the other. Unlike New York, or San Francisco, or many other American cities, Denver is big, empty and quiet in many places. You’re constantly reminded of the vastness that’s right outside your door. Which makes the presence of a restaurant serving the cuisine of a small, hot, remote island in the middle of the ocean two thousand miles away such a wonderful surprise.

Cuba Cuba is on Delaware Avenue, within a ten-minute walk of most of Denver’s downtown business and shopping district. Although empty and quiet, it’s also a residential neighborhood, with plenty of on-street parking. One interesting feature of the neighborhood is the presence of a lot of brightly-decorated bail bond offices nearby. For the uninitiated, bail bondsmen are the people who put up the money to get the newly arrested temporarily out of jail, and given that their clientele are usually in a hurry, their offices are not exactly decorated to blend in. Address: 1173 Delaware Street, Denver, CO 80204 Phone: (303) 605-2822

Really nice. Both casual and elegant, which is hard to pull off. The restaurant is in a pair of joined frame houses on a corner lot. The interior is rather dim, but in a romantic, Cuban kind of way with candlelight, pastel paint, a hardwood floor, and paintings and items reflecting Cuban culture. It’s comfortable, elegant and definitely Cuban, which is a nice experience.

Great. Because this is a small place, the owner is right there, which insures that things get done. The team is obviously experienced, and prompt, and delivers very personal, low-key service. Interestingly, since I was seated in the front room, right by the bar, the bartender was my server, which was nice.

Moderate. $50 for one, including two beers, dessert and coffee. Portions are moderate as well – not too much, and not too little.

The food is basically very good, although the entrée, which was a classic Cuban dish, was a little pallid. More on that in a minute. The meal began with a salad – what’s described as the Ensalata Cubana – a Cuban salad. It contained fresh avocado, hearts of palm, red onions & tomato tossed in the house vinaigrette, and was phenomenal. The ingredients worked perfectly together – the savory of the avocado contrasting and mixing with the richness of the hearts of palm, and the acid of the tomato and the onions. It was terrific – one of the best salads I’ve ever had. Dinner was a classic Cuban dish, known as Ropa Vieja. This phrase, which literally is translated in Spanish as “old clothes” is a shredded flank, brisket or skirt steak in a tomato sauce base. The shredded steak visually resembles old, worn-out clothing. The menu describes this dish as shredded beef sautéed in a tomato creole sauce served with white rice, black beans & tostones. And this dish was … just a little bit boring. Let’s take it apart. Rice is rice – not a lot you can do with it. Black beans are black beans – as far as I could tell, nothing especially interesting was done to them, either. They could have been straight out of the can. And the shredded beef itself, which was served in a large ramekin, was just simply shredded beef. Not a lot of flavor or richness or complexity. Just – shredded beef in tomato sauce. I was kind of disappointed. The fourth item in the dish was tostones, which were new to me. Tostones are round, flat potato pancakes, with onions and spices mixed into them, formed into a patty and deep-fried. My server recommended I doctor them with fresh lime juice, which was a great idea. They were wonderful. Finally, dessert. I opted for a cup of Cuban coffee, which is basically an extra-large espresso, heavily larded with sugar and milk. It’s similar to the coffee I’ve had in Singapore, where what you get is a kind of heavily-caffeinated sugar drink. The dessert itself was a kind of Cuban apple turnover, served with vanilla ice cream, and was fantastic. The combination of very strong coffee, and a lot of sugar is guaranteed to either wake you right up or put you right to sleep. Cuba Cuba is a really nice, unexpected blast of Caribbean in the middle of what might be the most Western town in the United States. It’s elegant, unusual, and the food is great.