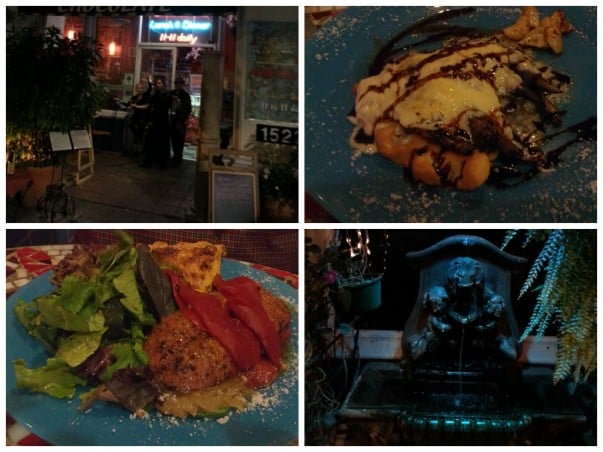 I have this personal preference for food that, for want of a better term, tastes like something. I like strong flavors. I like unusual ingredients – sometimes I will go out to eat, and order the oddest-looking dish on the menu, just to see what it tastes like. I have paid a high price for this, on occasion, but usually, I’m rewarded. I am not the guy, really, to rhapsodize about the subtle interplay of delicate flavors. I wish I was, sometimes, but I’m not. I really like restaurants where the chefs use ingredients that have some impact, and use them well.

As an example, I vastly prefer Korean food to Japanese food. I think kimchi is great. But although I like sushi, if I’m honest, the world’s greatest, freshest, nuanced-to-die-for meal doesn’t do it for me as well as a Korean stew, which is a simmered collection of strong flavors and powerful spices.

Measured against that standard, Chocolate really delivers. It is a fun, bistro-style restaurant that’s half indoors and half out. I’m not sure about the name – there is a lot of chocolate in their cooking, definitely, but it’s not a gimmick, and it’s not in everything.

But, what they do is big, in the sense that every dish is seriously, albeit expertly, flavored. There’s nothing subtle, laid-back or tricky about Chocolate. Really good food, in-your-face food, in a really fun, interesting setting.

Funky and arty and fun. There’s a cozy indoor seating area, as well as an outdoor area (basically, a block-off section of sidewalk) surrounded by enormous plants, with a fountain, heat lamps to keep you warm, and so on. Little banquette tables are covered in tile. There’s a rotating collection of local art. Again, funky and arty and fun. You can kind of tell this from their website, which is basically a collection of highly random images of food, as well as whatever else was on the mind of the owners at the time.

Great. Our server was a Mexican guy named Jose who kept up a steady stream of witty, entertaining chatter along with delivering food quickly and efficiently. Interestingly, when the check arrived, it was in a small box, sort of a cigar box, which is a nice touch. This keeps everything in one place.

Not bad -- $82 for two, including drinks and a shared dessert. Portions are large, but we were really hungry.

Again, interesting, strongly-flavored food. This is not a place you take your frail grandmother. This is a place where the kitchen swings for the fences, and if you’re not down with that, and you’d prefer cucumber sandwiches and weak tea, go somewhere else.

For our appetizer, we ordered the Portobello mushroom – and this is a direct quote from the menu “dripping with Gorgonzola”. Which it was. This dish was an absolute mess – it was served with knives and fork – but man, was it delicious. Start with a big mushroom, the size of a hamburger patty, broil it, then melt a powerful, soft cheese on top of it and serve it with truffle oil. It was fantastic – we polished it off in about fifteen seconds, sort of fought over it, really.
The first entrée was the spiced chocolate sausage. I’m going to reproduce the entire menu description here – it’s worth it. “Oven-roasted sausage made with natural cacao nibs, giving it a subtle chocolately taste. Served with carmelized onions and roasted peppers. Side of organic baby greens in balsamic vinaigrette, a slice of our crusty-cheesy polenta pie.”

Wow. The sausage was a really hearty item, with the promised flavors of cacao in it, along with all the other ingredients, none of which were exactly subtle. It was great, particularly paired with a cold beer or two.

The other entrée was Chicken Mole. Mole is a traditional Mexican sauce which begins as a very finely-ground powder of chilis, and is then simmered until it’s thick. People add all kinds of things to it, including (and I’m quoting from Wikipedia here): “Ingredients that have been added into moles include nuts, peanuts, pine nuts, sesame seeds, pumpkin seeds, squash seeds, cilantro, seedless grapes, plantains, garlic, onion, cinnamon, chocolate. What remained the same was the use of chili peppers, especially ancho, pasilla, mulato and chipotle, and the consistency of the sauce.”

Chocolate added – guess what? Chocolate. And the result was amazing. Think of a thick, rich, spicy sauce over chicken, with a base of chocolate, and served with a small salad and, again, polenta pie. Fantastic. The sauce, as advertised, is neither too sweet nor two spicy, but thick and rich and complex.

This place is not about subtle, arty, delicate, pretentious, precious or anything else. Little Lord Fauntleroy would hate it, as would the Queen of England, your overly sensitive sister, and your annoying friends who go an about being vegan, gluten-free and all the other kinds of nonsense. We, however, loved it. You will, too.