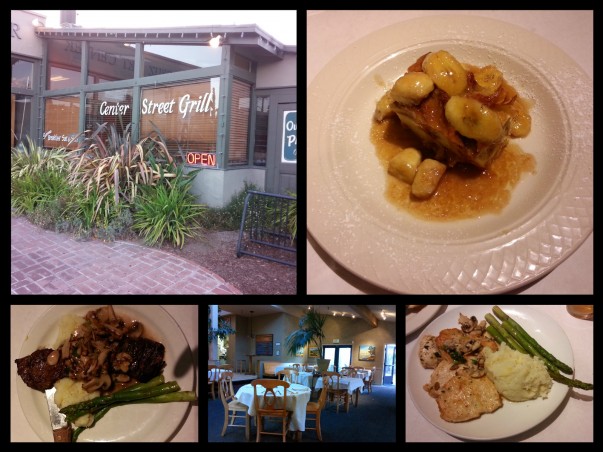 One of the things I find profoundly irritating about restaurants is the unfortunately common practice of Trying Too Hard. This entails dressing up what ought to be straight-ahead dishes with garnishes, decoration from squeeze bottles, fancy names or other affectations in an effort to both raise the price and make them appear trickier than they actually are. This can also include restaurants and kitchens trying too hard – attempting to turn out food which they, ultimately, are not qualified for.

This is why I love diners. The Santa Cruz Diner, like 10,000 other diners across the US, prepares simple, decent food at reasonable prices. It’s nothing fancy, but it’s good, and it’s fast, and it’s cheap and … well, you get the idea. When you’re driving into town and you’re hungry, you know that you can get fed quickly and pleasantly, as long as you’re not looking for a menu with a lot of French terms and complicated explanations.

The Center Street Grill operates in this same spirit. It’s a place that prepares food that’s about as straight-ahead as you can get. It’s really good, and it’s refreshingly straightforward. And those are both major blessings in my book, and I hope, in yours.

This is basically all-American food – classic American dishes prepared in the three-plop school – you got your meat, you got your vegetable, you got your starch, done. It’s well done, however, and that makes all the difference.

The Center Street Grill is on, as its name implies, Center Street, just off of Pacific. This is a little pie-shaped neighborhood tucked under Mission Hill, where Route 1 and Water Street come together. There is not a lot of parking here, so either park in a lot near Pacific and walk over, or bring quarters and be prepared to do a little hunting for parking. That being said, this isn’t a particularly busy neighborhood at night, so it’s not a big deal.

Airy, sunny and relatively quiet. There’s a big indoor seating area, and a smaller outside porch. The place has white paper on the tables, plants, modern California art on the walls.

Good. We were taken care of by one server for the entire meal, who was absurdly friendly, charming and fast.

Medium. $85 for two, including drinks and dessert. The portions are healthy – not gargantuan, but not too small.

We started with two recommended appetizers. The first was a simple wedge salad. I love these, both for sentimental reasons and because they’re basically calorie bombs dressed up as a salad. A big wedge of iceberg lettuce (read: no nutritional value whatsoever) with a bunch of ranch dressing on it, and a lot of bacon. Served with a steak knife, to saw through the lettuce. Good, and about as all-American a salad as you can get.

The other appetizer was kind of fun. It was tempura-style green beans. Beans are dipped in some kind of batter, stir-fried, and then served with a hot sauce. This was interesting, and fortunately, not the kind of tempura where the vegetables have been completely covered in breading and then deep-fried. These were spicy, easily eaten (although dressed with ranch dressing) and very good. Perfect for sharing.

The entrees were equally straight-ahead and all-American. Beth had chicken Piccata, which is a simple dish of pan-fried chicken cutlets with a chicken-based sauce. Although this is basically Italian, American cooks adopted it decades ago, and it’s served in every home, diner and school in the country. It’s nicely-done here, delivered with mushrooms, asparagus and mashed potatoes. This is exactly what your mother would make if she was a really, really good cook. Excellent.

My entrée was along the same lines. I had a skirt steak, which is basically a flank steak that’s been marinated, ideally for a long, long time. For whatever reason, this cut of beef absorbs marinade like nobody’s business, and ends up with a really nice, rich flavor, that grills very fast, and stands up very well to the heat of an open flame. This was flawlessly done, and delivered, again, with mashed potatoes and asparagus. The asparagus was simply done – steamed, lightly dressed, and bam, on the plate. Good work.

Dessert was a final all-American favorite, bread pudding. This is bread that’s been soaked in things like butter, milk, eggs and spices, and then baked. Sometimes, as here, you can add bananas, and a sweet sauce. Almost every culture and cuisine has some version of this dish, and here it was, again, just like Mom would have made if Mom could cook like crazy. Really good, simple, straightforward, and a perfect complement to a final cup of coffee.

I really liked the Center Street Grill. I’m not crying any crocodile tears here, but writing a lot of restaurant reviews sometimes means figuring a lot of stuff out. I mean, Mongolian cuisine? What do you write about that? No problem with that here. This is food that I’ve been familiar with, and loved, for a long, long time, done really well, and at reasonable prices. Good place.