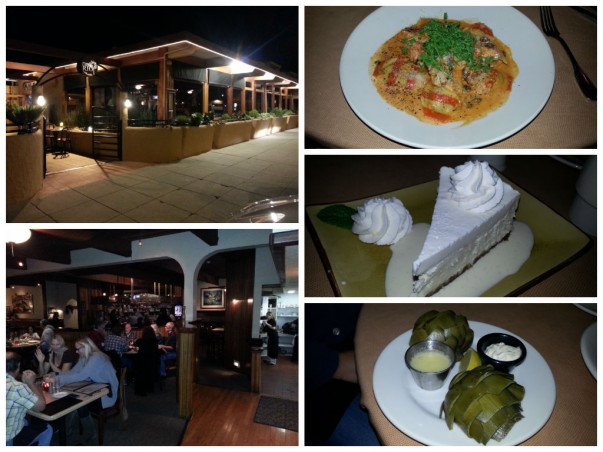 This place wasn’t actually bad. I have had bad. I know bad. Sometimes it makes you physically sick, or sometimes it makes the entire act of eating seem sort of ridiculous. You know, “So, let me get this straight. I’m supposed to put what’s on this round, white flat thing in front of me into this hole in the front of my face? Really?” Again, the Café Rio wasn’t actually bad.

What it was was distinctly mediocre. And kind of confused. This seems like a place that got its start in the eighties, and has sort of been running on momentum ever since, with a few things added and a few changes made once in a while, with the result, ultimately, being a sort of pointless combination of a lot of things that probably work out fine if you’re distracted, or not too fussy, but none of them really worked together. Or, as Beth, my dining companion put it, “I came here several times, but I was usually drunk.” That about sums it up. With some drinks in you, this place would seem great.

Essentially, I think that this place is sort of living on its location.

Café Rio is in Aptos, right on the waterfront. Although we ate there during the evening, I’m sure that in daylight, the views are incredible, which is a great selling point. It has its own parking lot, so parking should not be a problem.

A little odd. It’s a big room, including a patio, a main dining area divided by a low wall into different sections, and a bar area. The room also has a series of single steps up and down, which are easy to miss and trip over, much to the amusement of the people at the bar. The décor is, frankly, kind of odd. It’s a mishmash of stuff, none of which seems to have any connection with other stuff – a big, ugly copper sculpture/painting against one wall, for example, and a big Café Rio logo against another. I spent my meal staring at the logo from about four feet away. Another odd thing was that the tables didn’t have any kind of cloth, or any real surface. It looked like they just decided one day to remove the tablecloths, and let patrons live with whatever was underneath.

Fine. Our server was a young woman named Marin, although apparently not after the county. Polite, fast, charming and expert. Great service.

Pretty expensive. $101 for two, including drinks and dessert. The portions are good, but not gigantic.

The food is just not that great. Sorry, period, but that’s the story.

One good thing about this place, I have say, was the drinks. I don’t usually drink at dinner, but I wasn’t feeling great, and what’s better for helping manage a cold than gin? And it was a nice, big gin and tonic that arrived at my table, and was very welcome, indeed. Anyway – on to the food itself.

For appetizers, we had a house salad, which was fine, and a steamed artichoke, which was served with a lemon mayonnaise dip and melted butter. It’s hard to fault an artichoke – I mean, really, it’s artichoke – but this one seemed a little anemic.

My entrée was the ravioli special of the evening, which was a letdown. It had a lot of good ingredients in it – crab, prawns, roasted peppers and so on, but it was too ornate, and looked to me like a tactic for getting rid of fish that was about to go either bad or unsold or both. The apparent idea was to pile up ingredients, hose the whole thing down with cream sauce, garnish it and get it out there. It just wasn’t that great.

Beth had the fire-grilled breast of chicken, with sort of the same outcome. Same sort of approach. Grill a chicken breast, dump cream sauce on it, park it on a bed of polenta, plop some grilled vegetables around it, garnish it, and voila. Look! It’s gourmet food! See how fancy it is?

Dessert worked the same way. We ordered a coconut cheesecake, which turned out to be a big, white, sweet slice of coconutty stuff that just barely/slightly tasted like actual cheesecake.

Again, nothing at Café Rio was actually bad. It, however, wasn’t especially good, either. Good cooking isn’t as simply as using good ingredients, or serving something that happens to be rich. The dish has to taste like something, to have a kind of point of view. Unfortunately, Café Rio’s output just sort of lacked that. The drinks were good, though.