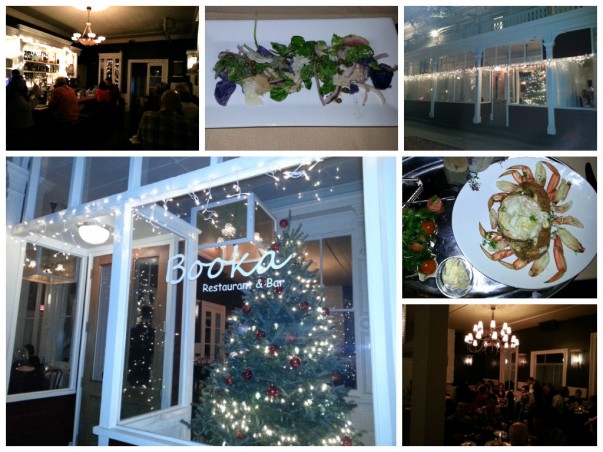 In many, many ways, I am a complete sucker for a pretty face. For obvious reasons, this has gotten me into real trouble on more than one occasion. However, at Booka, it didn’t happen. For the most part, the place lived up to its appearance, and delivered excellent food that was also, interestingly, beautiful. The only drawback is that Booka tends to be noisy, and it’s also pretty dark.

Note : This restaurant is reportedly closed.

Booka is on Soquel Drive right across from a small shopping plaza and a barbecue joint. Which means that if it’s full, or you feel like getting in touch with your Inner White Trash, Aptos BBQ is right across the street. Anyway, Booka has its own lot, so parking’s not a problem, and it’s also easy to find. It’s like up like a wedding cake.

Wonderful. Booka is located in the Bayview Hotel, which opened in 1878. It has all the elegance, grace and beauty of a nineteenth-century hotel – high ceilings, wood floors, enormous windows with lace curtains, and intricate, classic woodwork. It has the look and feel of a place travelers would reach a century ago only after a long journey over the Santa Cruz Mountains, through the redwoods and down a difficult road. When it’s lit up at night, the effect is spectacular, and when we were there, the holiday decorations made it even more incredible. Wisely, the owners have not attempted to change much or anything, but have preserved it for the most part. The overall effect is busy, happy and fun.

Very good, but a little brisk. We arrived without a reservation, and while a table was found for us quickly, there was also a certain air of “Shut up, I’m working on it” emanating from the hostess. Also, at the end of the meal, it turned out that the coffee we had ordered was delayed, and then denied which wasn’t great. All in all, though, fine but not exactly warm.

Expensive. $125 for two, including drinks and dessert. On the other hand, one of us ordered a very expensive special, which didn’t help.

Great, and beautiful. There’s a creative/sculptural aspect to what they turn out at Booka which is really kind of nice. Other places, like the wretched Paradise Beache Grille, in Capitola, decorate their food to disguise the fact that’s mediocre. Booka does it because it creates something beautiful, which obviously matters to them.

We started with an interesting choice – a Greek ceviche. Diced yellowtail, colorful cherry tomatoes, herbs, shallots, chili, Kalamata olive & Yuzu with Greek yogurt. A ceviche is actually a South American dish that prepares raw fish by marinating it in citrus juice. The result, as here, is a powerful citrus flavor, which was really nicely balanced by the yogurt, olives and shallots. A winner – clean-tasting, and as a ceviche has to be, absolutely fresh.

The other appetizer was a nicely-done Caesar salad, which was also beautifully prepared. Like the ceviche, which was served in a gorgeous little pastry, the salad was as beautiful as it was good.

Entrees started with the aforementioned ridiculously expensive special. It was Dungeness Crab season, and I ended up ordering a whole crab, from which the meat had been removed then replaced in the shell. Essentially the kitchen staff had done all the work for me, and then created a beautiful little sculpture of it. This included a fascinating little Zen garden sculpture consisting of stones with a garnish. The effect was surprisingly beautiful, and as far as the taste (of the meal, not the stones) it was ¾ of a pound of fresh Dungness crab. Any questions?

The other entrée was mushroom gnocchi, which was prepared using several different kinds of mushrooms along with a healthy hit of truffle oil. The menu describes it as “handmade potato gnocchi, made with Shiitake, Shimaji, Portobello, and button mushrooms, along with truffle oil & 24-month Parmesan.” The result is rich, complex, hearty and deep – a perfect meal for a winter’s night, which this was.

Dessert was a revelation as well. We ordered the “Snow” which is “Filo dough, orange bitters pastry cream, hazelnut & berries.” Words don’t really do it justice. The dessert itself was incredible, but it was really a lovely little three-dimensional painting. A lot of pastry chefs love to whip out the squeeze bottle and decorate desserts, but whoever back in the Booka kitchen made this into a lovely little work of art.