First a word about the Mission, to those who have not been to any of its branches or have not interacted with people ordained into the mission. The Rama Krishna Mission was established by Swami Vivekananda, a leading Hindu nationalist of his time, as a place where boys from poor families could strengthen their academic and spiritual foundations.

Wherever these Missions are set up, they adopt entire neighborhoods, so to speak. Boys from these houses mostly attend school at the Ramakrishna Mission. Not surprisingly therefore, most of them turn out well in life- either working in metropolitan cities in India or settled abroad. The affluence of the children has rubbed off onto the parents in terms of financial solvency and pride in their children's achievements. But it has not affected their gregarious, warm and friendly nature. These families remain united in sorrow and joy. And the Ramakrishna Mission remains the center of their lives.

Durga Puja at Ramakrishna Mission is held according to Vishuddh Siddhanta. Vishuddha Siddhanta is an almanac (panjika) that was published in 1890 AD (1297 Bengali Year). This almanac is considered by many erudite scholars including internationally known astrophysicist Prof Meghnad Saha and scholars of scriptures like Deshikottama Dr Srijiv Nyayaratna. 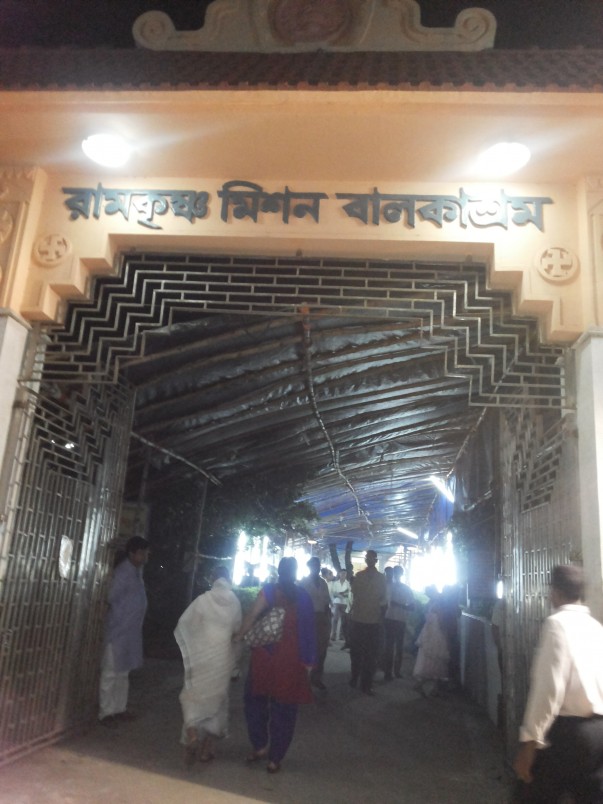 The gate to the Ramakrishna Mission

Coming back to Durga Puja at Rama Krishna Mission, Rahara. Like I said earlier, the spirit of Ramakrishna Mission permeates its surrounding area so thoroughly that the entire neighborhood bears the stamp of the Mission- in the way they conduct their daily activities, in the confidence they display, while interacting with anyone of any stature, and in being comfortable in their skin. The entire neighborhood is known as Missionpara ( meaning neighborhood of the Mission). When the Ramakrishna Mission was set up here, entire families got up and moved to this area, just so that their boys would have a shot at an education at the Mission. This speaks volumes of the standards of the Mission as well as of the academic aspirations of the families in the area. 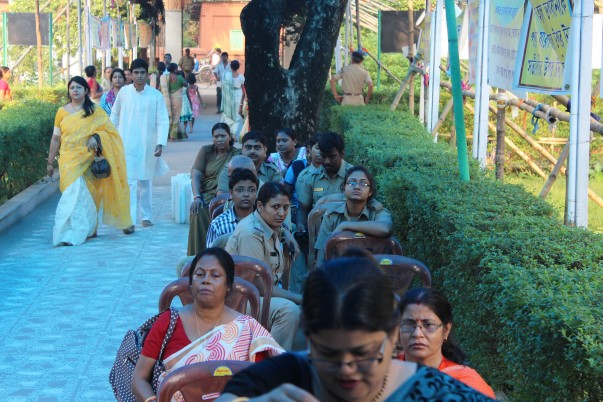 Durga Puja at the mission is a very organized and disciplined affair. Cops oversee the early morning rush

Durga Puja at the Mission is a very disciplined and organized affair. Hundreds visit the Mission on the days of the Puja. Men, who were once students here and have now moved out, also return to this place during the festival. So this also becomes an informal alumni meet of sorts. Risen from humble beginnings, these 'boys-turned-men,' greet one another with great enthusiasm, and, revisit the innocuous mirth and excitement of their school days, as they take trips, however fleeting, down the memory lane. 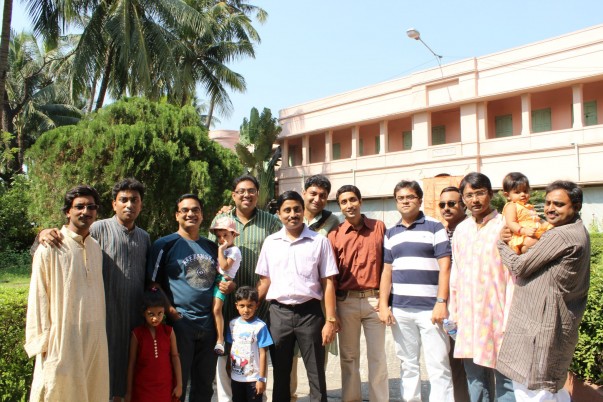 Alumni of Ramakrishna Mission Boys' School meet after a long time at the Durga Puja.

Banners with quotes of Sri Ramakrishna and his pious wife Maa Sharada hang on both sides of the paved road leading from the gate of the Ramakrishna Mission to the steps of the main temple. These quotes are so thought provoking that whenever I go there, I find myself dawdling on the way to the temple, reading these quotes and trying to assess their applicability to practical life. They make a lot of sense to a family man who is trying to fulfill his duties, both towards his family and towards divinity.

Some of the quotes that have caught my attention and remained with me are:

Another quote by Sri Ramakrishna, "Just like a wandering friar plays two musical instruments with both his hands and still manages to sing a wonderful song; so must a man bound in worldly ties have his hands full with his earthly duties and still chant the name of the Lord.”

Another quote by Maa Sharada, “Nothing can be achieved without devotion and hard work. Even the sandalwood needs to be rubbed repeatedly so that it may emit its fragrance.” 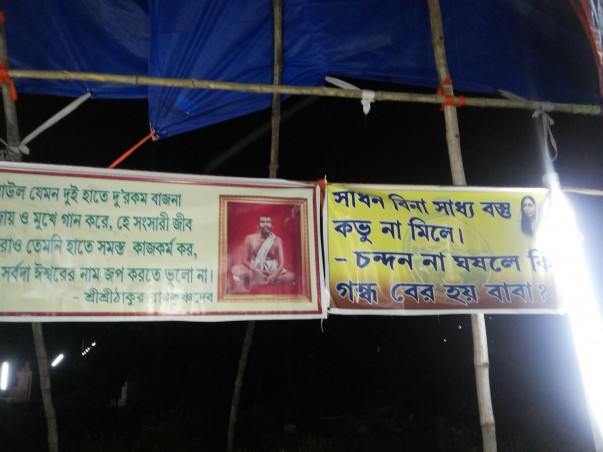 Inside the marble temple, is a life size porcelain statue of Prabhu Sri Ramakrishna- the man who led a simple life of devotion, and in whose name Swami Vivekananda started the Ramakrishna Mission.

Here we can see Ramakrishna sitting in a position of utter surrender. Shri Ramakrishna was not educated. He did not know much of the priestly ceremonies that went on at the Dakshineshwar temple. But he would sit there, lost in devotion, on all days. His palms are not clasped into any erudite gesture. 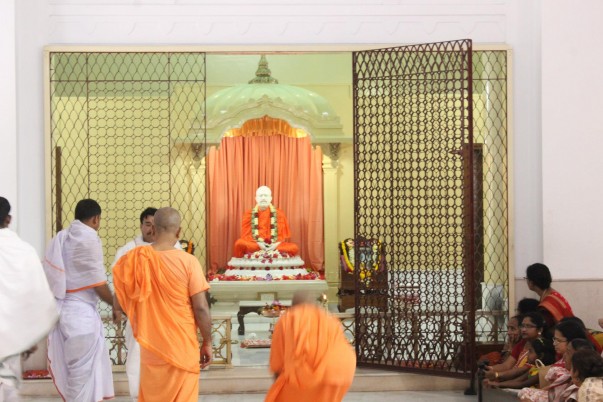 Prabhu Shri Ramakrishna with his hands clasped in devotion

There is a huge sitting space where devotees can sit and watch the priest go about his duties.

The Durga Puja is held in this open area. An idol of Goddess Durga with her clan of four children and the demon Mahishashura is placed in the open area. And then ceremonies are started as per the Vishuddha Siddhanta Panjika (pure principles almanac). 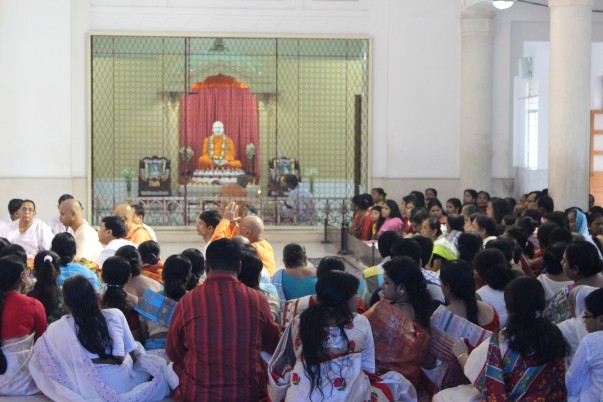 Area for devotees to sit inside the main temple 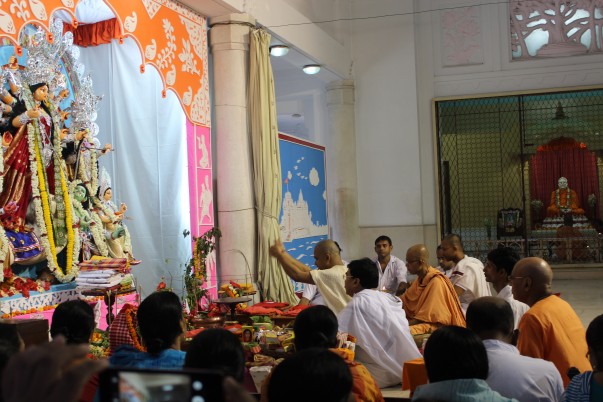 The main difference I have noticed between the Vishudha Siddhanta almanac and the older almanac is that of time. The rituals may vary, but only slightly. 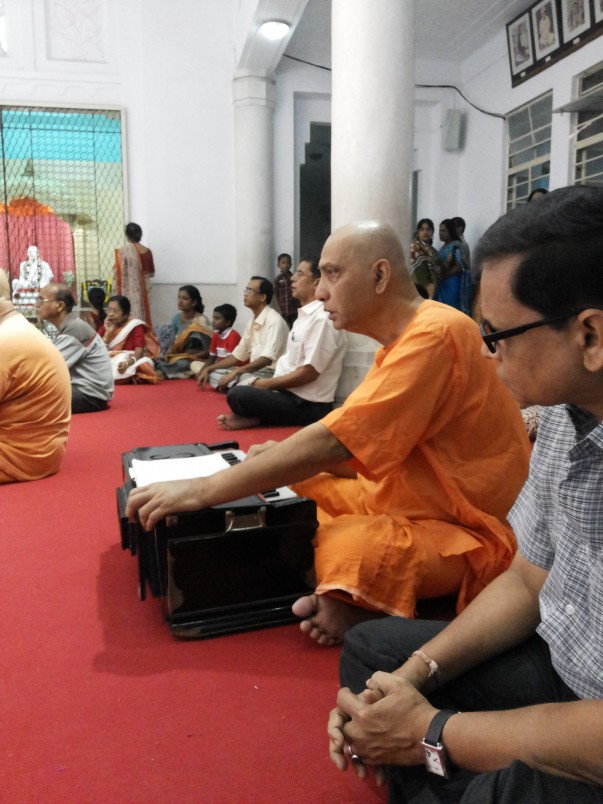 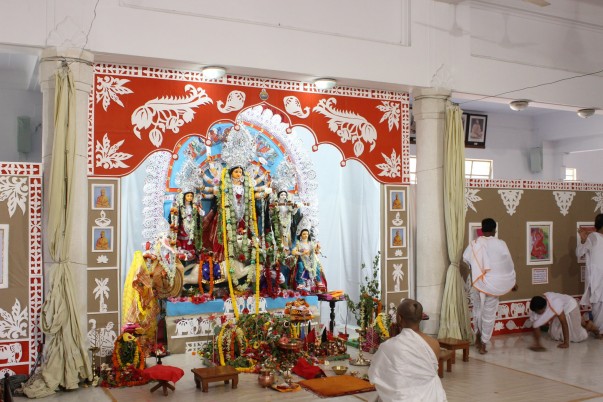 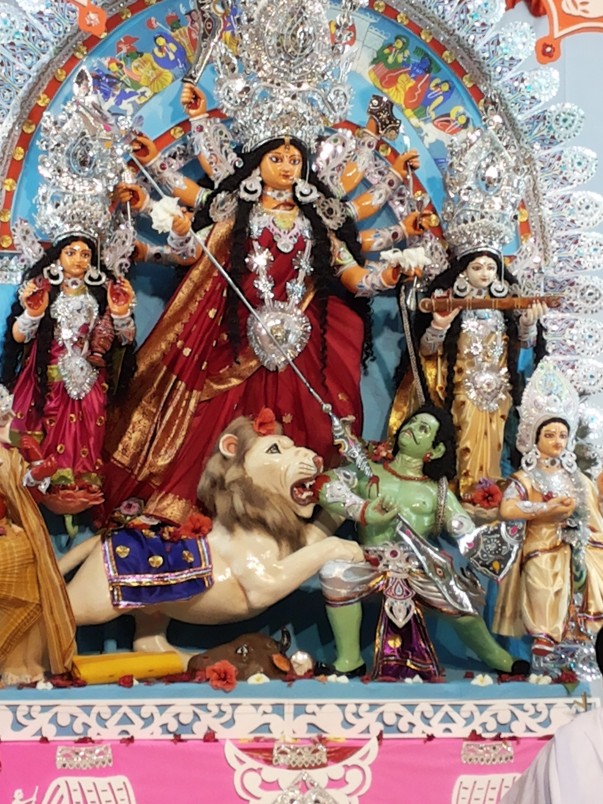 The idol of Durga at the Mission in 2014 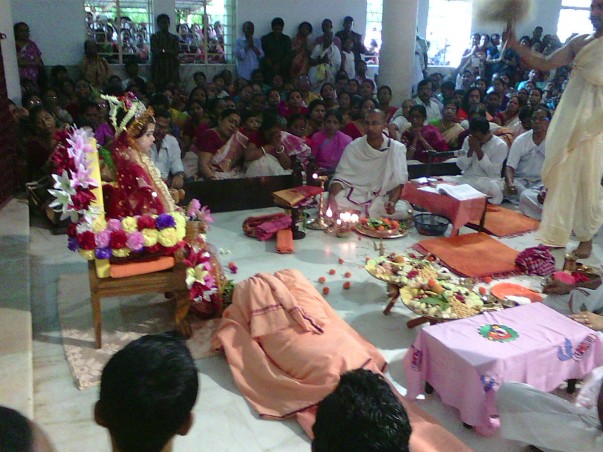 Kumari Puja (Maiden worship) at the Ramakrishna Mission. A small girl is worshiped as the maiden form of the goddess. The priest prostrates at her feet after the ceremony. 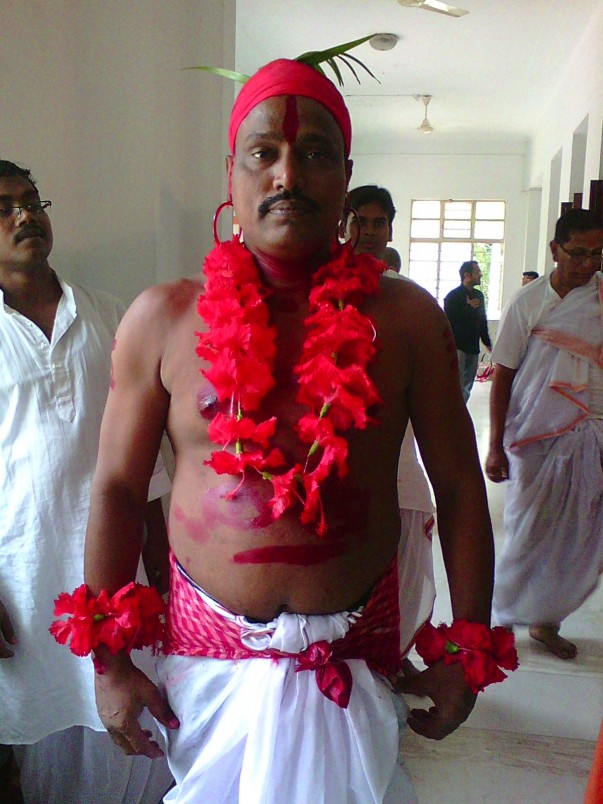 A man dressed as Jallad (headsman)

The legend of Durga Puja has it that when all the gods and mortals found the brutalities of the demon king Mahishashura impossible to bear they invoked the Goddess Durga to kill him. The Goddess arrived in a unique Shakti Avatar(Incarnation of Power) with ten hands, and killed the demon. When the Goddess was engaged in a battle with Mahishashura, the demons Chanda and Munda appeared from behind and started attacking the Goddess. It was then that she appeared in her fierce Chamunda avatar- with a falchion, a shield and a scarlet tongue. She was the fierce form of the Goddess of power- she was Chamunda. The precise moment at which Goddess Chamunda killed the two demons, is called the Sandhi moment or the sacred moment. It is the most auspicious moment of the Durga Puja. It includes the last twenty four minutes of Ashthami (eighth day) and the first twenty four minutes of Navami (ninth day) of Durga Puja, more popularly known as Navratri in the rest of India.

A man dresses up as an executioner, and kills the symbolic evil by splitting into two a bundle of gourd, sugarcane and bananas. 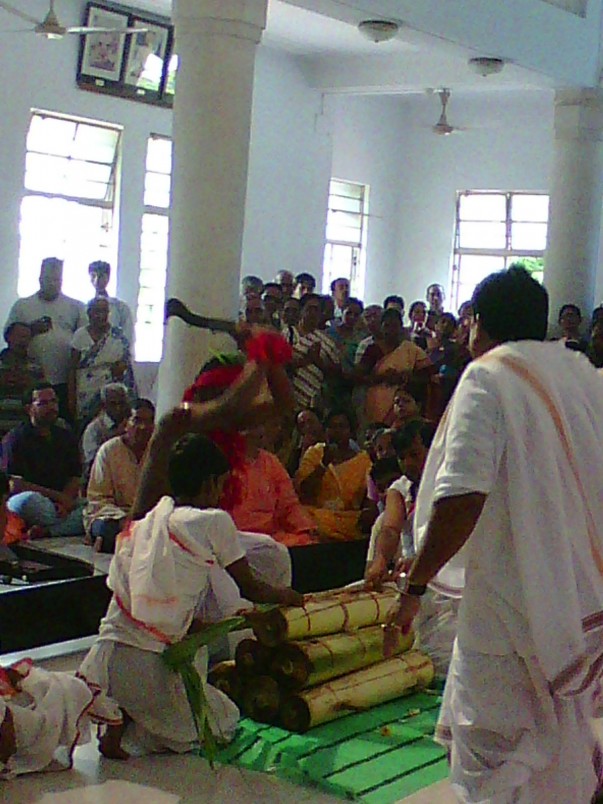 A falchion in hand, the man splits a bundle of sugarcane, gourd and bananas, a symbolic killing of evil 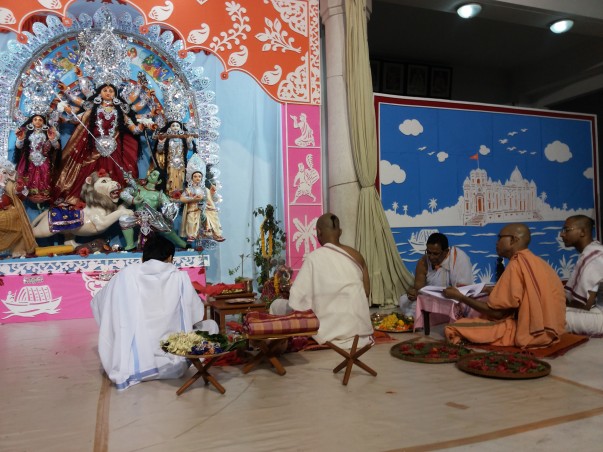 Ongoing ceremony of the Durga Puja at Ramakrishna Mission 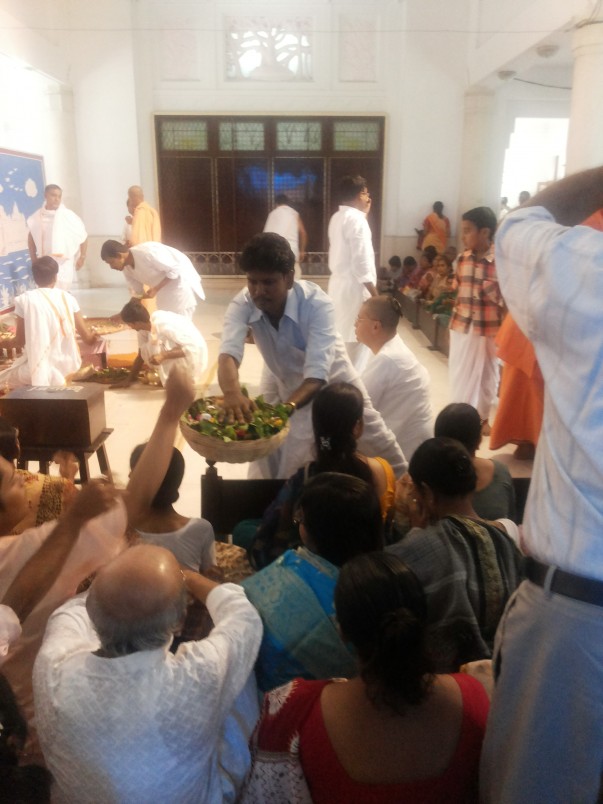 Pushpanjali(offering of flowers) at the Durga Puja.

After the priest has finished with the ceremonies of the worship on each day, devotees are given a chance to offer their worship to the Goddess. They are handed out flowers and bael leaves to offer at the Goddess's feet. Since the turnout of devotees at the Pushpanjali is very huge, organizers generally hand out the flowers and leaves from a straw basket, and once the devotees have recited their prayers, organizers then send the empty straw basket around, in which devotees drop the flowers and leaves. The full basket is then overturned at the feet of the Goddess. 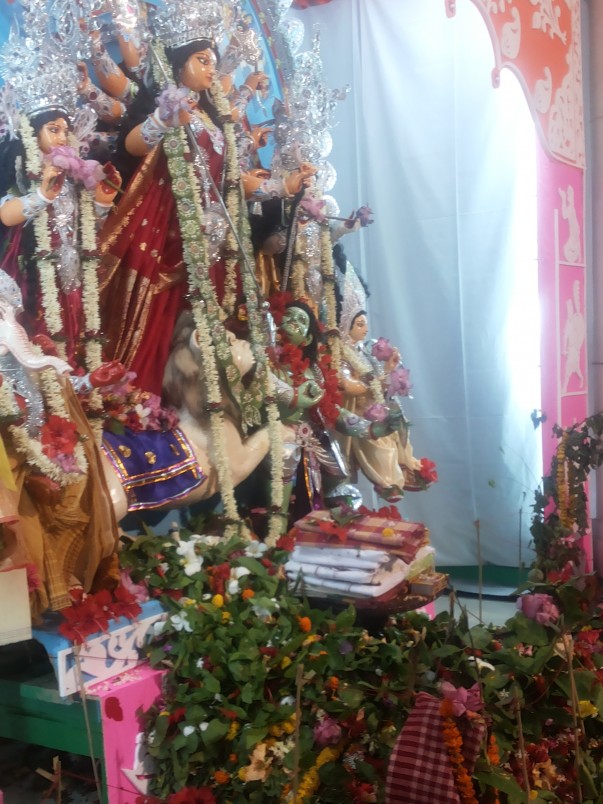 The idol of the Goddess, after she has received offerings of clothes and flowers from her devotees

Once the ceremonies are over for the day, Bhog is cooked. Bhog is food for the Goddess and her family and typically consists Khichdi ( a mildly spicy dish made of rice and lentils), Labra ( a curry made with mixing all vegetables), Begun Bhaja ( fried eggplant), Chutney (sweet dish prepared from a variety of fruits and vegetables) and Payesh (sweet rice cooked in milk). The bhog is served to the Goddess, and she is covered from all sides so that she may eat in peace with her children. After sometime has passed, the Bhog is distributed among the devotees as sacrament. 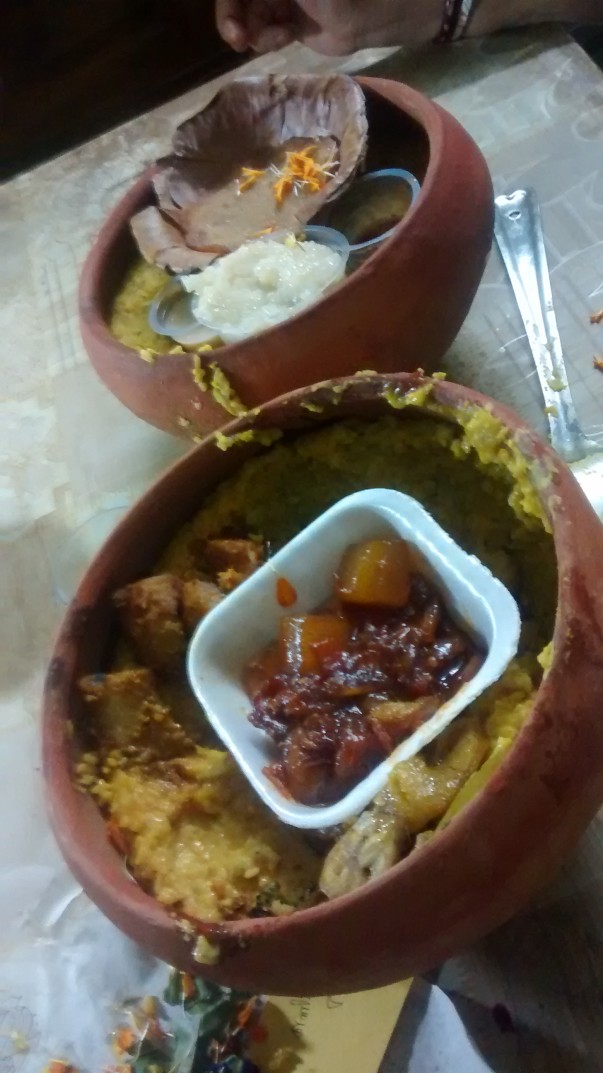 After the Goddess has eaten, the Bhog is distributed to her devotees as sacrament.