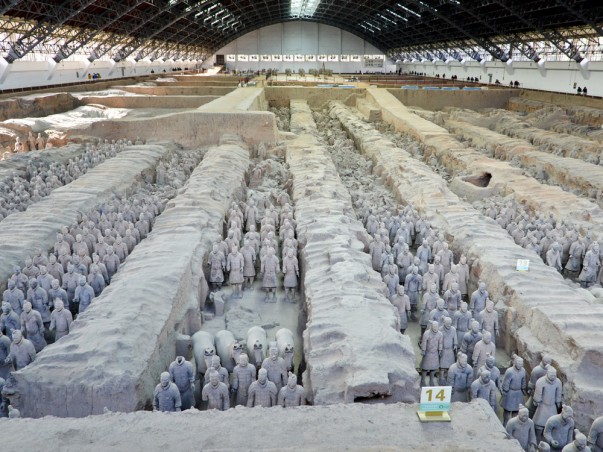 Tombs stocked with valuable and everyday items are well known, a case in point being the pyramids built by the Pharaohs of Egypt. However, a tomb with the whole military along with civilians in an extended mausoleum is fascinating beyond words. This one-of-a-kind mausoleum was found in 1974 near Mount Li in the Shaanxi Province of China and it has an entourage made of terracotta; hence the name, Terracotta Warriors or Army. This army comprises warriors of different ranks, chariots, horses, armor, weapons, and even government officials, entertainers, and strongmen all made out of baked clay.

The Terracotta Warriors are considered among the greatest archaeological finds in the 20th century. The museum built around it, known as the Terracotta Army Museum, is a top sightseeing attraction in China, second only to the Great Wall. Tourism officials have recorded over 2 million tourists visiting this museum from across the globe. In addition, the attraction of the Terracotta Warriors is so much that wherever in the world some of the items were exhibited people have visited in throngs to look at them.

Located about 25 miles from the city of Xian, the Terracotta Warriors were discovered by farmers, accidentally while digging the ground to make a well 1.3 miles away from Qin Shi Huang’s tomb. On informing the officials about the beautifully sculptured faces of terracotta (which are clay-ware burnt in a kiln to harden), archaeologists sent by the government started excavating the area to find out about these figurines. What they found was beyond anyone’s imagination - several miles of land covered with numerous life-size structures. After 40 years of excavating efforts and recreating the broken figures, there were enthralling revelations across 22 square miles. These terracotta figures dated back to the 3rd century BC and seemed to have been commissioned by Qin Shin Huang to protect him in his journey after death.

The reason that makes the Terracotta Warriors unique and a must-see is the fact that they are very well preserved for the past 2,200 years. This may have been because of the controlled temperature at the time of burial till they were excavated. Apart from this, all the information known today not only comes from the study of this site but also from records about the building of Qin Shi’s tomb written by the court’s official historian, Sima Qian. According to him, the emperor employed 700,000 workers to make the clay-army. An assembly-line process was used to create almost 8,000 warriors, which means each part of the body was built separately and assembled in the end. Each figure was carefully placed in rows like the stand guard during a war setting. The army was also arranged according to rank. This was well understood by the type of clothes painted on the warriors. At present, the paint on the warriors has weathered, but the archaeologists' careful examination of the remaining paint on certain warriors have helped them draw this conclusion. In addition to the warriors, archaeologists have also uncovered chromium-plated armor that they held, bronze statues of horses that represented the cavalry, wooden chariots, and a model of the kingdom at the time of Qin Shi's death from the site. Mercury was used to depict rivers in the model!

Qin Shi Huang and his Tomb

While visiting this mausoleum-cum-museum in China, you can imagine the power and grandeur of the emperor, Qin Shi Huang. He was the first emperor of a unified China. Born as Ying Zhen, he succeeded his father to the throne of the small Qin State at the age of 13. His ambitions at such an early age were evident when he conquered and unified adjoining kingdoms. This was when he declared himself Qin Shi Huang. He is also credited with having built the Great Wall’s first version. The building of his expansive mausoleum started quite early after his accession. After his death he was buried in a pyramid-shaped tomb, which is believed to never have been opened. Archaeologists believe that opening the tomb can ruin the inner contents.

« The Magical City of Belgrade - Things to do Things To Do and See In Bucharest, Romania »