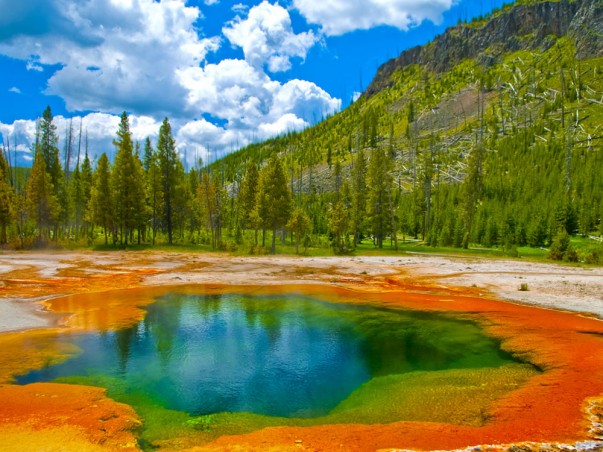 Yellowstone National Park, located mostly in the Wyoming province in the U.S (96%; Montana has 3% and Idaho has 1%), is the world’s first national park. It received this status in 1872 after President Ulysses Grant made the Yellowstone Park Act a law. It is famous for its geological hydrothermal features, varying ecosystems, and wildlife. Owing to its attractions, this Park receives over 3 million visitors each year.

Located on a high plateau across the Continental Divide, the Yellowstone National Park is surrounded by high-altitude lakes, mountains, forests, and deep canyons. Its beauteous views make it an ideal destination for vacationers, and its flora, fauna, fumaroles, geysers and mud spots attract environmentalists from around the world.

The recognition of Yellowstone National Park comes from the smoldering active volcano. The Park has experienced three explosions in the past 2.1 million years (the last explosion being 640,000 years ago). At present, a large ‘caldera’, about 45 by 30 miles (largest in North American continent) lies at the site of the last volcanic explosion. Apart from these, the Park also lies in the zone of continuing tectonic and geothermal activities, due to which it has about 1,000 to 3,000 earthquakes each year, along with about 300 geysers, and 290 waterfalls. The tallest waterfall here is the Lower Falls on the Yellowstone River, about 308 feet high.

The Yellowstone National Park is a place of immense interest to archeologists as well. With around 1,600 archeological sites excavated in the Park, a great deal of interesting information has been uncovered which includes over 900 historic buildings, 300 ethnographic resources, 379,000 cultural objects and natural specimens. Various rare books, manuscripts and photographs from explorers, scholars and visitors to the park proves the existence of normal life in this park with a delicate ecosystem. In ancient times, the park was home to 26 Native American tribes for the past 12,000 years. Archaeological sites uncovered show that they used the place for hunting, burials, and battles, as well as ceremonies.

While touring the Yellowstone National Park, you will come across steaming areas, which are caused due to the continuing tectonic activities of the super volcano here. One of the most famous of these hydrothermal sites is the Old Faithful Geyser. This cone geyser, named in 1870, even before the National Park came into existence, has the unique distinction of being the “Most Predictable Geographical Feature on Earth” – it erupts every 91 minutes round the clock.

If your vehicle comes to a halt due to a bison walking leisurely on the road, you can come out and take a look at North America’s largest land mammal. The grasslands of the Park is a biosphere reserve that has been home to these nomadic animals since prehistoric times. You must be careful while watching the bison, though - they are known to hurt humans who come too close to them.

Apart from the bison, the National Park also preserves a large variety of wildlife, including 16 fish species, 7 native ungulate species, 322 bird species, 2 species of bears (of which the grizzly bear is threatened), and 4 species of amphibians. You can spot endangered animal species (red listedby IUCN), like the Canada Lynx and the Gray Wolf, in the Park.

The forested land in the Yellowstone National Park, of which 80% is covered with Lodgepile Pines (Pinus contorta), is prone to forest fires. In fact, 36% of the land was burned in 1988. The famous North Fork Fire that scorched over 410,000 acres was caused by a lit cigarette butt.