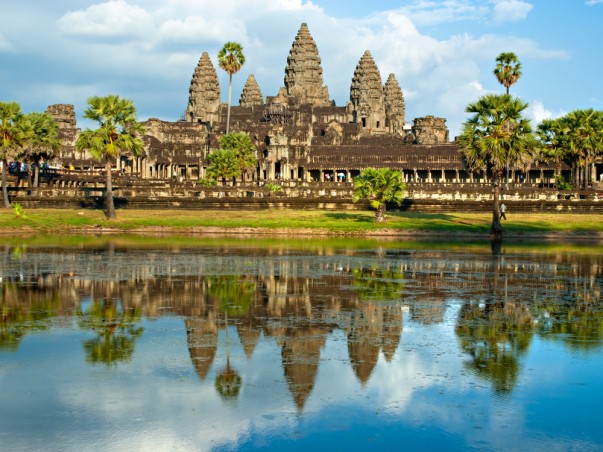 Temple of Angkor Wat in Cambodia

A mesmerizing architectural marvel, Angkor Wat in Cambodia is a temple built in the early 12th century AD. Built as a Hindu Temple, by Emperor Suryavarman II, its religious orientation throughout history has changed according to the religion followed by the rulers of the Khmer Empire. Due to this there were a number of additions and destructions of structures in the region for the past eight centuries. Eventually, the Theraveda sect of Buddhists finalized its status as a Buddhist temple restoring the temple to the current one that we see today.

Spread across 401 acres and towering at a maximum height of almost 700 feet, Angkor Wat holds the Guinness Record for being the "Largest Religious Structure in the World". Its beauty and cultural impact has earned it the status of a UNESCO World Heritage Site, since 1992. The best time of the day to see the colossal Angkor Wat vista is during sunrise.

Angkor Wat is located about four miles from Siem Reap, a town featuring French colonial architecture. The area around the temple is forested with several rice fields, and just 20 miles north-east stands the Phnom Kulen Hills, known for its scenic landscape and rich biodiversity. From a distance Angkor Wat looks like a gigantic and single-level stone structure with a long passageway leading to its heart. Go close and the structure becomes far more enlarged with five artfully sculpted layer-domed towers, chambers, galleries, aisles, and courtyards with stairways at various levels. One of the most prominent features of the Angkor Wat is its bas reliefs of feminine figures. Each of these female sculptures display different ‘mudras’ or positions along with intricately carved jewelry, dress, and hair style.

An interesting fact about Angkor Wat is that it is not just a temple, it is also a mausoleum. Normally temples are built facing the east, which is the auspicious direction for Hindus. Angkor Wat, although, faces west, the direction of the setting sun. This may either mean that the builders didn’t have any clue about directions, or the temple was not really a temple. Archaeologists believe in the later theory and consider the structure to be a ‘funerary temple’ for King Suryavarman II.

If you are going to Cambodia to see the Angkor Wat, you might as well visit the entire temple region, which is better known as the Angkor Archaeological Park. Angkor Wat is actually one of the hundreds of religious structures around the 300 sq km of the northern part of Cambodia. These are said to have been built by the rulers reigning between the 7th to 13th centuries AD. Notable temples include Angkor Thom, Bayon Temple, Ta Prohm Temple, and Bakong Temple. Tour agencies’ itineraries contain a certain number of temples depending on the number of days you wish to holiday in Cambodia.

Here’s an interesting fact about Angkor Wat and its surroundings areas. The Khmer rulers did not really build the temples in the jungle that you see today. It was earlier an urban city with residential areas and a proper drainage system. This Hidden City of about 1,000 sq km seen was recently uncovered using remote sensing laser technology (known as LiDAR) around Angkor Wat in the Kulen’s jungle and nearby lowlands. Archaeologists date the site between the 9th and 15th centuries AD.

The grand Angkor Wat has inspired a number of literary works down the ages. Apart from the non-fictional and informative guide books written by writers like Michael D. Coe, Dawn F. Rooney, and Michael Freeman, the temple has inspired fictional stories as well. One such is a historical fiction written by John Shors, named Temple of a Thousand Faces. Other novels are A Woman of Angkor by John Burgess, and The King’s Last Song by Geoff Ryman.