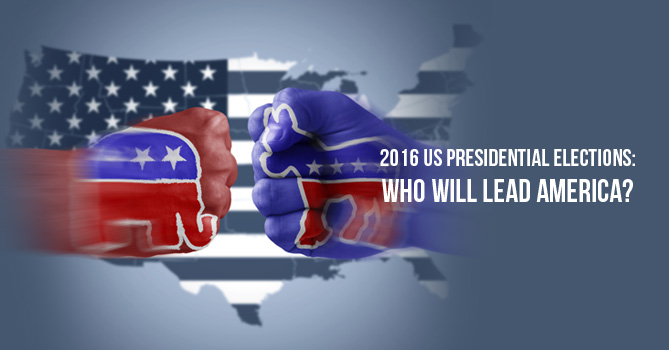 On November 8, 2016, the U.S. presidential polls will take place. This is one election in the world where campaigning starts one year before the scheduled polls which are held on Tuesday – after the first Monday in November. It’s a tradition that is continuing in the U.S. since 1845. But like every election, it has the potential to throw surprises. The rivalry between Democratic Party and Republican Party – the two main political outfits which have ruled the country for more than 200 years – is getting more intense.

Hillary Clinton, former Secretary of State, is facing a tough time in staying ahead of other Democrat candidates in the presidential race. She is ahead of Donald Trump in popularity rate across America. However, controversy over Clinton’s use of personal e-mail while she was secretary of state is showing no signs of easing, as the number of messages now deemed classified have doubled. The NBC/ Wall Street Journal survey conducted from September 20 to 24 among 256 Democratic voters and 230 Republican voters speaks about the damage Hillary has suffered due to the e-mail controversy. Only 42 per cent voters, according to NBC/Wall Street Journal survey, feel that Hillary Clinton will prove to be the best for the presidential job. Nonetheless, she is ahead of Bernie Sanders and other Democrat hopefuls.

Counting on her strong donor base and her contribution to the country as the Secretary of State, Clinton has been confidently surging head. She has won the primaries in Alabama, Arkansas, Georgia, Massachusetts, Tennessee, Virginia, Louisiana, Mississippi and a couple of other states. When it comes to caucuses, she defeated her rival, Bernie Sanders, in Iowa, Nevada, and American Samoa.

There’s still some hope left for Bernie Sanders, the left-wing senator, who won convincingly in New Hampshire. While the narrow defeat in 2016 Iowa Democratic caucuses was a moral setback, the Democrat is till looked upon by voters as “honest and trustworthy”. What has made his supporters more hopeful is the major upset he pulled off on March 8 by winning the Michigan Democratic primary.

Though most of primary elections will be over after June 2016,  yet setting the cat among the pigeons is Donald Trump, a billionaire businessman and one of Republicans in the race for the 2016 presidential election in the U.S. Known for his no-holds-barred approach to issues related to foreign policy, health and finance, Donald Trump is leading the chart of almost all opinion poll surveys in America.

Trump is dominating the Republican race as he has convincingly won primaries in Louisiana, Michigan, Mississippi, New Hampshire, South Carolina, and Virginia. His rivals – Marco Rubio and Ted Cruz – were left far behind in several Republican presidential caucuses. His recent win in Hawaii has put him on the fast lane.

Marco Rubio’s victory in Puerto Rico may not create a major dent in Trump’s delegate bank. March 15, 2016 is going to be a crucial day for Rubio because he is desperate to win in Florida, his home state. Despite the positives on Rubio’s side, it seems the Republican race has become a two-man battle between Cruz and Trump. Cruz has cruised through some of the important battles for popularity and he has gone on to win Maine and Kansas, and also gave a good fight in Louisiana.

Whatever the outcome, it is clear that the 2016 presidential election would draw the largest voter turnout this country has ever seen. And it’s not because the list of presidential candidates is exciting and controversial. Several pressing issues like gun violence, expensive college education, immigration, and use of marijuana have been at the forefront of debates. Candidates’ policies on addressing these problems could play a major role in determining our country’s next commander-in-chief.