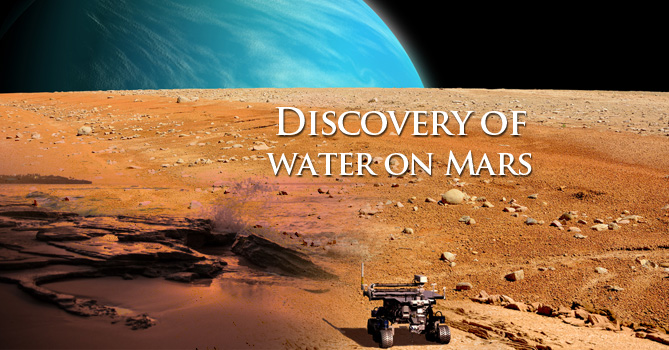 The recent announcement that water has been found on Mars has generated a significant amount of interest among people of various classes – both scientists who have been following the developments on these planets with lot of interest and common people. As per information, it is liquid water that is flowing on the planet’s surface, not the ice caps that are found in the polar areas. This has opened up a virtual Pandora’s Box of imagination and all sorts of theories have been pouring in. However, before we start flying on the wings of imagination there are a few aspects of this discovery that people need to be aware of. Even authorities state that the discovery is an exciting one and they are only more enthused by the prospect of being able to further explore Mars.

Nature of Water Discovered on Mars

Areas of Interest for Common People

Even if the water discovered on Mars is salty it means that there is possibility that life exists in some form over there. As far as common knowledge goes, liquid water is essential for life. It also needs to be remembered that water – no matter what form it is found in – is a resource that can be exploited by Mars missions in the days ahead.

It is not yet known if any form of life, like what we see on Earth, exists on Mars. In Earth, various life forms go into hibernation when the dry season comes. It needs to be kept in mind that the water that has been discovered in the seasonal dark streaks that are being seen on the slopes of Mars – also known as RSL – is salty. It is common knowledge that salty water is not good for life.

Source of the Water

The source of the water in Mars is not known yet. From the looks of it, that will be the next aspect that the scientists will look into and try to find out. However, a number of theories are already being bandied about in this respect. One of them is that the salty surface – where the water has been found – is drawing water from the nearby atmosphere. However, it also needs to be taken into cognizance that the Martian atmosphere does not have a high level of moisture content. The second theory is that the water is coming from the surface below the upper layer.

It has been estimated that liquid water was present in Mars at least billions of years back. The scientists are presently looking at the whereabouts of that water. It has been stated that it may have got lost in space. It is also possible that it may have been frozen in the planet’s crust and is now part of the ice caps. There are ice ages in Mars where the polar water becomes sublime and gets distributed to the remainder of the planet. It is highly possible that the ice found on the planet’s crust may have been created during one of those ice ages.

Possibility of Exploration by Rovers

The RSL are located on steep slopes. So it will not be possible for the rovers to explore these areas. Since the areas, being talked about over here, are ones where liquid water has been found, they have been designated as special areas and additional precautions need to be taken so that earthly life does not contaminate these places. It is not known what effect Earthly life will have on any life form that may be found over here. This is why the spacecrafts are cleaned with a lot of care by the authorities who send them. The present-day rovers are not sterilized to the extent that they can visit areas where water has been found on Mars.

Humans on Mars and Next Steps

At present NASA is taking 2030 and thereabouts as the year when human beings can be sent even anywhere close to Mars. As things stand as of now, human beings can expect to be on Mars by the later part of the decade of 2030s. Next up, the authorities will look at finding out other locations where such brine flows may be found. The Mars Reconnaissance Orbiter has been gathering information on the planet from March 2006 onwards but till date only 3% of the planet has been covered at resolutions that are good enough for the features to be seen properly.