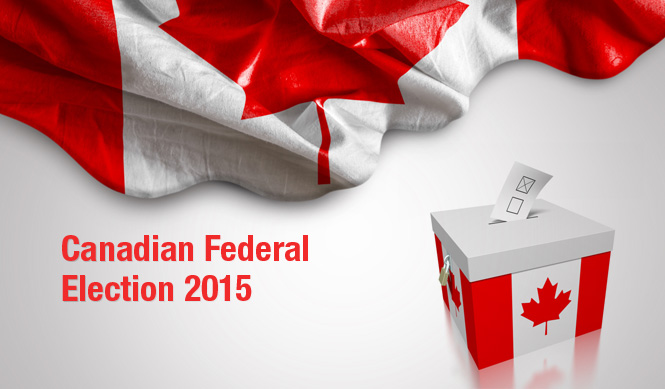 Canadians are all set to vote on October 19, 2015, to elect the new Prime Minister of the country. The 2015 Canadian federal election, which was formally the 42nd Canadian general election, is being held to elect members of the House of Commons of the 42nd Parliament of Canada.

The Parties:  How are they faring?

The main three parties to look out for and which would witness a tough fight would be the Conservative Party of Canada, Liberal Party of Canada and the New Democratic Party. Though the final outcome would decide the winner and the next Prime Minister of the country, opinion polls have started to throw some light on what can be expected in the Canadian general elections. An Ipsos poll that was released recently says that around 33 percent of the people of the country are in favor of the Liberal Party. This is around six percentage points ahead of the Conservatives and three points ahead of the NDP.

The poll goes on to say that in Ontario, the Liberals enjoy 41 percent support. This is a big lead over conservatives, who enjoy 32 percent support, and the NDP, whose support base stands at 24 percent. The Green Party has a support of only 3 percent. The Liberal Party also has a strong support in Atlantic Canada, which stands at a whopping 49 percent.

However, in French-speaking Quebec, the NDP is the dominating party with 37 percent support and in British Columbia also, the NDP has 36 percent support. The Conservatives follow at 28 percent and the Liberals at 24 percent, while the Green party garners 10 percent support.

However, Alberta seems to be a Conservative stronghold where they have around 39 percent support and 44 percent in Saskatchewan and Manitoba.

Candidates to ‘Watch Out’ for

The candidates who would be in focus in the 2015 Canadian Elections include Stephen Harper, the current Prime Minister and leader of the Conservative Party. He faces tough challenge from two other contenders – Justin Trudeau, the leader of the Liberal Party of Canada, and Thomas Mulcair, the leader of the new Democratic Party of Canada. It is going to be a bumpy road for Harper as just 29 percent believe that his government has done a good job and he deserves to be re-elected to the post of the Prime Minister. A majority, which is 71 percent, believes that the time has come for another party to be elected to lead the country. Of the people polled, Mulcair is leading the race with 38 percent considering him as the best candidate for Prime Minister. Trudeau follows at 32 percent and Harper at 28 percent.

Prime Ministerial hopeful, Trudeau has promised that if elected, he would invest heavily in the infrastructure sector, which would provide a boost to the economy and help create jobs. Apart from this, he has also said that for the next three years, he would run small deficits and balance the books by 2019. Outlining his party’s promises, Muclair says that he would recruit more health professionals. He said the long-term plans would be to phase in key plans such as $15-a-day child-care spaces.

The three parties have also different opinions regarding marijuana. While the Liberal Party has promised to legalize marijuana, the Conservatives have committed a tough-on-crime that maintains the status-quo. However, NDP has promised to decriminalize the drug.

The Conservatives are aiming at keeping taxes low. The last year they had announced billions in new tax cuts and brought in more generous Universal Child Care Benefit payments. On the other hand, the Liberals are promising to change personal tax rates. They aim to introduce a new tax rate. This would be 33 percent on income over $200,000. Apart from this, they would also introduce a “Canada Child Benefit.” Liberal Leader Justin Trudeau supports lowering the small-business tax rate. The NDP says that it won’t touch personal income taxes and will cut the small-business tax rate to 9 percent within two years.

Canadians would be going to the polls with great expectations and hopes. Naturally, they would vote for the person they believe would be able to provide a boost to the economy, infrastructure, and healthcare and create more jobs for the masses.

Some Interesting Facts about Canada Elections 2015

Canada will go to the polls on October 19 to elect a new government to head the nation. The results will only decide whether the current Prime Minister, Stephen Harper, will be voted back to power or this time a new government will take over. However, there are a few points to take into account regarding the 2015 Canada Elections:

2. The 2015 Federal Elections will be the sixth one of Harper. It will be the first for both Justin Trudeau and Tom Mulcair.

4. Latest reports have emerged saying Tom Mulcair, NDP Leader, is rejecting last minute electoral cooperation with the Liberals that would help in defeating the Conservatives. Mulcair has said that he will form a government when voted are counted on election day.