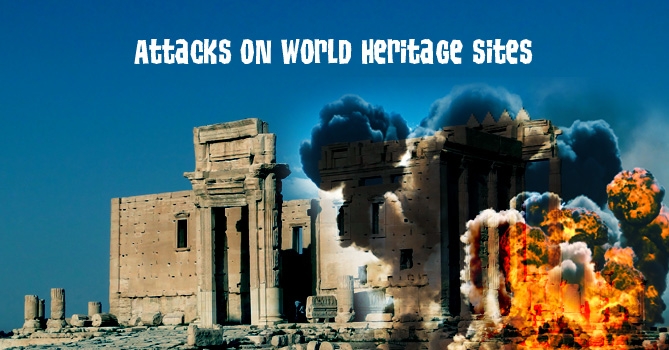 History is full of incidents when a country in war or conflict has faced attacks on its cultural heritage – both tangible and intangible attributes inherited from past generations. Buildings, monuments, landscapes, books, works of art and artifacts are tangible attributes while traditions, folklore, language and knowledge are intangible attributes. But then what gives civilized and urbane society of the world a heart wrenching shock is that some Islamists and jihadi groups in the name of cultural cleansing not only destroy heritage sites but also kill their protectors. Besides, spreading violence and letting streets of Syria, Afghanistan and Iraq fill with blood of innocent people, ISIS, Taliban and al-Qaeda have brutally attacked these countries’ cultural legacies. By doing this, they serve two goals: first, theological and second, mundane political. It happened when Taliban blew up the Buddhas of Bamiyan in Afghanistan in 2001 or al-Qaeda bombed the al-Askari mosque in 2006 or Islamists from al-Qaeda and Ansar Dine destroyed a UN declared world heritage site in Timbuktu in Mali, an African country. The ISIS also attacked the ancient Assyrian church of Tikrit in Iraq in 2014. It is not that mercenaries of death and destructions have stopped launching attacks on world heritage sites, rather they are continuing with more virulent manner.

In wanton display of aggression, ISIS militants beheaded Khaled al-Assad in Syria in August 2015, because he was a renowned scholar of the ancient world and he tried to protect ruins of Palmyra from the ISIS plunder. The octogenarian had dedicated his life to studying the antiques at Palmyra, the world heritage site filled with historical treasures like 2,000 year old Roman buildings and invaluable pre-Islamic statues. A committed and passionate follower of ancient world history, he did not flee Palmyra when ISIS conquered it from the Syrian government forces. He was caught and interrogated by ISIS, hoping to get him reveal Palmyra’s hidden treasures. But he preferred dying to reveal priceless historical artifacts of Palmyra to his tormentors. In an atrocious manner, the outlawed group first of all hanged him from a Roman Column in the city and then beheaded him, sending a wave of shock across the world.

Two monumental statues of standing Buddhas dating back to 6th century AD were destroyed by the Taliban in the Bamyan valley of Afghanistan in March 2001, as the terrorist group found them un-Islamic. Built in accordance with classic blended style of Gandhara art, the main bodies of Buddhas were hewn from the sandstone cliff, but their other parts were made from the mix of mud and straw. The two Buddha statues measuring 58 and 38 metres long were destroyed by the Taliban on orders from their leader Mullah Mohammed Omar. It is said that in 1221 Genghis Khan, the Mongol emperor had conquered Bamiyan, but he spared the two statues. However, Mughal emperor Aurangzeb and 18th century Persian King Nader Afshar attacked and destroyed the Buddha statues, as they like Taliban found the statues as un-Islamic ones.

Similarly, al Qaeda bombed the al-Askari mosque at the height of civil war in 2006 in Iraq, because it belonged to Shia whom Sunni-dominated al Qaeda hate. The mosque, built in the city of Samarra in the year 944, is considered as one of the holiest Shia shrines. And, al Qaeda militants reduced it to rubble by bombing, to further inflame sectarian war in the West Asian nation.

Whether political or religious motivations were involved or not, but when ISIS attacked the Assyrian Green Church in Tikrit two years ago, the militant organization which is now under constant attacks from the US, France, Russia and others, bombed it to rubble out of  its knack for cultural vandalism. Built in the year 700, the church enjoyed world heritage status. It should be noted that both Iraq and Syria are known as cultural jackpots with people following different faiths and religion. And ISIS militants have constantly attacked them to satiate their perverse ideological understanding and their design to establish Caliphate in the region. Last year, they destroyed the statute of the ancient king of Hatra, an Iraqi city-state of the Roman era and not a major part of Islamic theology. In the same year, they are said to have bulldozed Nimrud, an ancient Iraqi city of high cultural and historical significance. Lying a few kilometers away from Mosul, Nimrud is famous for being an Assyrian city which was established between 1250 BC and 610 BC. But finding the city anti-Islamic in its background and history, fanatical ISIS members destroyed it by using bulldozers. An unaccountable number of monuments, buildings and artifacts have been destroyed by the ISIS in Iraq and Syrian region in the past two years in its attempt to establish its brand of fundamentalism and theology.

Not that only West Asia is under the siege of Islamists and militant organizations, there are several African nations also that find themselves under attack from jehadi groups. In 2012, al Qaeda and its affiliate Ansar Dine ran over 15th century built mosques and tombs of Timbuktu in Mali and destroyed them as they viewed these relics of world heritage importance as ones representing idol worship, a concept that stands contrary to Islamic tenets. International leaders have condemned destructions of such ancient monuments by these terrorist groups. But they, maddened by ideological spirit, do not have patience to listen to sermons of sane and educated members of their own religious community, because they think their work is divinely ordained.