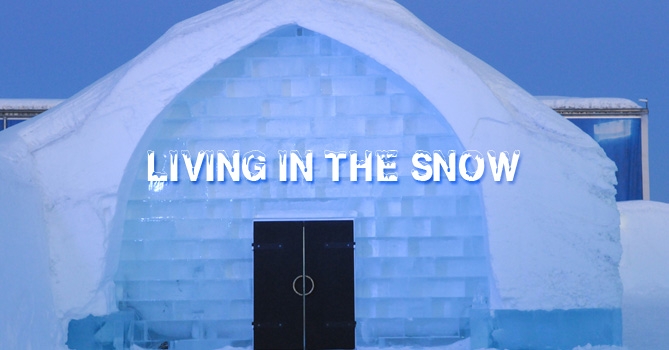 As snow flakes cover the magnificent European mountains, skiing enthusiasts head out for some adventure, while some tourists just wish to enjoy the snow. But there are a few who visit the region to experience the cool environs of the Ice Hotels in Northern Hemisphere. The fact that these hotels are made entirely of ice is what makes them unusual. Even the tables, beds, chairs, cutlery and drinking glasses are carved out of ice. True to the theme, the embellishments, intricate décor, wall art and sculptures in these hotels are also made of ice.

The SnowCastle of Kemi, Finland

Finland’s town of Kemi is well-known around the world for being home to one of the biggest snow forts in the world. Every year it is rebuilt and over the years the size of the snow castle has varied. A few specialties include – the SnowRestaurant, the ecumenical SnowChapel and the SnowHotel. The temperature inside may be a chilling 5 degree Celsius, but that should not be a cause of worry as the hotel is equipped with sleeping bags that comprise thermal fleece linings to make your nights warm and cozy.

Nestled in the Carpathian Mountains, the Hotel of Ice is rebuilt every year and visitors are likely to be greeted with a new design each year. As the design and size varies, it is tough to estimate the number of rooms, but the 2012 and 2013 Ice Hotel comprised 12 rooms, a restaurant, an ice lounge and a bar. The temperature inside the hotel is a freezing -4 degree celsius and you will have to sleep on ice beds. But that should not deter you as the beds are covered with bedsheets, comfortable mattresses and furs. The hotel provides delicious meals that are served on ice tables. The chairs are made of ice and so are the plates on which you would be served food.

Located in Jukkasjärvi, the Icehotel dates back to 1989 when the original one was founded. The hotel is built from the frozen water of Torne River and is believed that around 100 people are involved in its construction. Get a classic sleeping experience on beds made of ice. Take a trip into the region’s frozen wilderness on horseback and witness the unforgettable Northern Lights or indulge in some other activity. The hotel serves delicious meals, obviously on ice plates. The hotel offers different rooms at different prices ranging from the Deluxe Suite, to the Art Suites, Northern Lights, Ice Rooms and Snow Rooms.

If you are planning to visit Norway and spend a cool vacation in an Kirkenes Snowhotel, then the best time to do so is from December to April. It takes around 15 tonnes of ice and a whole lot of labor and creativity to construct the hotel, which has 20 rooms and suites. The temperatures of the room are maintained at a freezing – 4 degree celsius and they are adorned with eye-catching snow art. Getting bored is not an option here as you would be overwhelmed by a number of interesting activities such as northern lights tour by husky ride, artic king crab fishing tour, and a cross-country skiing tour.

If you thought that Switzerland was all about luxury watches and chocolates, then take a trip to the Igloo-Village in Gstaad (Berner Oberland). Here, visitors would come across intricately designed interiors that have been carved out of ice. The suites also include whirlpool tubs.

Known for the Eiffel Tower and the Palace of Versailles, France is also popular for the amazing Village Igloo Morzine. It is located in the Portes du Soleil region of Avoriaz. The hotel features an ice restaurant and a bar where visitors can gorge on scrumptious cuisines or wet their tongues with tantalizing drinks.

If you are planning to visit Canada during winters, do not forget to visit the Hotel de Glace located in Quebec. This magnificent piece of work comprises around 44 rooms and amazing snow art. The hotel is located just 10 minutes from downtown Quebec. Upon your arrival at the hotel, you would be given a taste of ice cider, which would be served in an ice flute. The rooms are chilly but comfortable sleeping bags and blankets and fireplace in premium suites make your nights comfortable. Some amenities offered at the hotel include outdoor spa and sauna and behind-the-scenes tour.

Another of Norway’s attractions, the Sorrisniva Igloo Hotel located on the banks of the Alta River. The first hotel was created in 1999. Situated in idyllic surroundings, the 30-room hotel includes an ice-bar, lounges and an ice-chapel. The best time to visit the hotel is from mid-January to mid-April.

This is located high up in the Austrian Alps. This amazing facility includes bed in a 4-man Igloo (2 double beds). Other facilities provided here include – a welcome drink, which includes tea of mulled wine, continental buffet breakfast, dinner (cheese fondue) and of course a sleeping bag.

If you thought ice hotels are only located in the freezing cold locales then check this out. Japan, which is known for its capsule and love hotels, is also home to the extremely popular Alpha Resort Tomamu in the Shimukappu village. Have a delicious meal in an ice dinning room and on a table and in plates made of ice. Want to warm yourself up a bit then head to the bar and savor your favorite drink in glasses made of ice. The hotel is open till February, then it will not accommodate any guests as it would melt away.