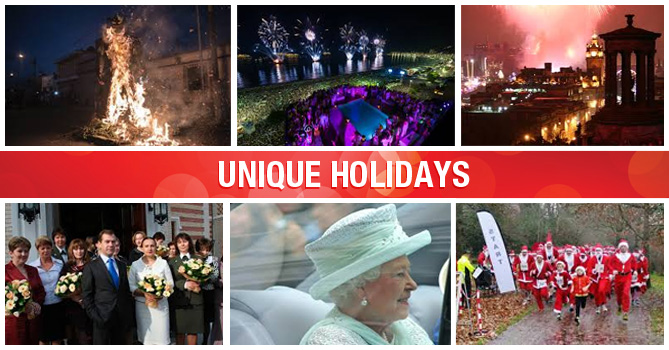 It’s holiday season and we all have laid our plans on how to make the most out of it, and deservedly so,  after a year’s hard-work. But apart from the usual holidays that we have around the year, there are some other intriguing ones you might like to know about. Read on to find out.

The Mountain Day in Japan is one of the most unique holidays in the world. It is one that nature lovers will certainly appreciate. The legislation regarding this festival says that it provides people an opportunity to become one with the mountains of Japan and appreciate the blessings that they confer upon us. This festival is also supposed to help everyone appreciate the plentiful natural beauty of Japan and tide over the stresses of daily life.

This festival is celebrated each year in China and Taiwan on April 4 or 5 and is referred locally as the Quinming Festival. People celebrate this day by consuming green dumplings (also known as quingtuan), visit the local operas and art galleries to have a day out with one’s family, and also visit the burial grounds of their ancestors and pray.

Russia celebrates International Women’s Day on March 8. It commemorates women across the world, who are fighting for their rights in order to be regarded equal to men in all walks of life and for values such as peace and democracy. On this day, people give flowers and chocolates to their grandmothers and mothers. It is also not uncommon to see men performing household duties that are supposed to be performed by women.

South Africa celebrates Human Rights Day on March 21. This festival commemorates the Sharpeville happenings that took place on 1960. On that day 69 people lost their lives and 180 were injured when police opened fire on a peaceful procession. This day also serves as a way of combating the country’s history of colonialism, Apartheid, and slavery.

People in Australia celebrate the Queen’s birthday with great gusto and a lot of pomp. There are fireworks and a soccer game is held in her honor. An awards ceremony is held as well.

Santa Run is celebrated in Wales on the first week of December or the final week of November. On this day lots of people dress up as Santa and take part in a long distance race of 7 km. It is estimated that almost 5000 people participate in the same. A lot of participants are actually fit enough to finish the race in 18 minutes. Since, this is held for a charitable purpose the participants give away their prizes to the needy. In fact, this race has also found a place in the Guinness Book of World Records.

This festival is celebrated to commemorate the final day of a year and the way of celebrating it is distinctively Scottish. As part of festivities, people try to race to the homes of their neighbors or friends and give them good luck gifts. It is also known as first-footing. In parts such as Aberdeenshire, people actually light balls of fire and swing them over their heads like there is no tomorrow. These balls are made of chicken wire wrapped in inflammable material and once the swinging is done they are thrown onto the harbor. This is accompanied by further fireworks and pipebands.

This festival is basically a New Year’s celebration on the beach of Copacabana, where people come in droves. They normally are clad in white and bring lilies that are supposed to be sacrificed to the Yemanja, the Goddess of Sea. One is allowed to make three wishes for the sacrifice to get them granted by the deity. The party goes on till midnight with live performances and huge barges where the fireworks happen. At times, people also spill over to the Ipanema Beach and here the merrymaking goes on till morning. Brazil is definitely one of the best places to party and this is what makes this festival so popular.

This festival is celebrated as a way to mark the defeat of Satan by Jesus. Guatemalans actually burn an effigy depicting Satan. This festival is celebrated each year on December 7 and there is a definite time for celebrating the same. It starts with families making bonfires near their homes and burning the said effigies. This festival basically serves as a way of washing away the demon from one’s homes and starting the lead-up to festivals such as Feast of the Immaculate Conception and the holiday season that follows.

Following are some other unique festivals of the world: