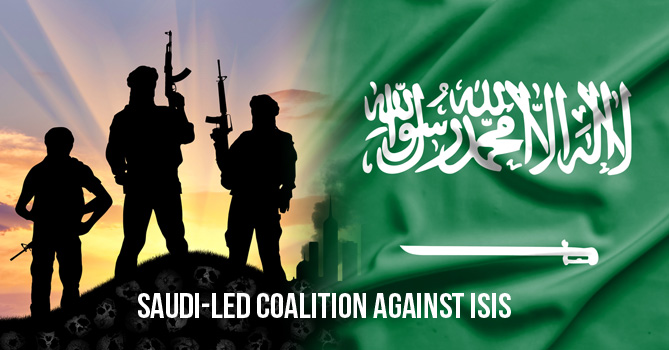 Saudi Arabia recently announced forming a coalition of 34 Muslim countries, including Egypt and Turkey, to fight against ISIS, the terrorist outfit which has proved to be a menace for the global security. Killing of 129 people in Paris and 14 people in California in the US by ISIS men has confirmed its brutal and ominous outreach. Despite this, the announcement made by Saudi Arabian Defense Minister and Deputy Crown Prince Mohammed bin Salman, has a deliberation omission: Iran, Syria and Iraq have been kept out of the alliance, even as these countries share a common enemy in ISIS. All three are non-Sunni states as such their exclusion from the proposed alliance of Muslin countries’ fight against ISIS reeks of looming religious and ideological differences among Islamic states in Gulf and the West Asia. But in any case, announcement of formation of anti-ISIS coalition appears to have been made not after consulting all countries whose services have been sought by Saudi Arabia. Rather it has been randomly done and this is the reason Pakistan and Lebanon expressed their surprise over their inclusion in the list of 34 Muslim countries.

Pakistan’s foreign secretary Aizaz Chaudhry was shocked to know that his country was enlisted without prior consultation from Islamabad. Moreover, he was quoted as saying that he only knew about Pakistan’s inclusion in the alliance from newspapers. Similar was Lebanon’s complaint. The country maintained that without consulting it before hand it was included into the alliance against ISIS. Nonetheless, what has surfaced out of such development is growing differences between Pakistan and its onetime strong ally in Gulf, Saudi Arabia. Pakistan had said big ‘no’ to Riyadh when the latter had sought help from Islamabad in attacking Houthis rebels in Yemen. For this, a resolution was passed in Pakistan assembly in which Riyadh was told in clear terms that Pakistani troops would not involve in any conflict in the Middle-East. This time too, Islamabad offered the same argument. “We are not looking for any involvement outside our region,” Pakistan army spokesman Lt Gen Asim Bajwa said.

Primary reason behind Pakistan’s non-involvement in any conflict in Middle-East is that the country, despite being dominated by Sunni Muslim, has a fair share of Shia population. Sunni constitutes 75 per cent, while Shia constitutes 15-20 per cent of the total population of Pakistan. Both of them have well-entrenched representations in the Pakistani army, security and intelligence agencies. Any alliance-led against Yemen’s rebels or Syria would be seen as a conflict between Sunni and Shia in Pakistan. In fact, with Pakistan army fully engaged in operation against Taliban in the region close to Afghanistan border, allowing Pakistani troops to be part of a coalition in Middle-East means inviting further trouble inside the country. This is why Pakistan has once again reaffirmed its position that it was not looking for any involvement outside its border.

Nonetheless, international community has welcomed Saudi Arabian move to form a coalition against ISIS. But a rough data reveals that Saudi Arabia and the UAE have so far launched just one mission against ISIS targets, while Bahrain and Jordan have completely stopped strikes against the terrorist outfit’s targets in Iraq and Syria. Anyhow, better late than never dictum seems to be an overriding thinking in the wealthy Gulf state behind its announcement. Yet security experts across the world have put their fingers crossed on the success of the proposed anti-ISIS Muslim nations’ coalition, even as the plan of alliance formation and its mission to be established inside Saudi land are just at a lateral stage. They say without the support from Iran, the alliance cannot achieve desired success against ISIS. Their argument is that Iran with its resources would have suited the goal of Muslim countries’ proposed alliance in better manner than others. It is said that not only Iran has all sorts of military groups, but also militias that are connected to all sorts of forces in Iraq-Syria region. Close rivalry and ideological differences between Iran and Saudi Arabia may undermine the target of the proposed alliance, is what several security experts worry about. Also, there is a primary thinking among Saudi Arabia, UAE and others that Iran is intent upon hegemony over the Gulf region. As such, these countries feel, allowing Iran to be a part of anti-ISIS alliance means giving Tehran further space to show its primacy in the region which they do not want at any cost.

Whatever may be the pros and cons of the announcement for planned counter-terrorism coalition, experts argue that terrorism cannot be contained without containing the ideology that drives ISIS, al-Qaeda and other outfits across the world. Wahhabism, the ideology that extols jihad and fundamentalism is encouraged by the Gulf nations. Oil rich businessmen from these countries have been accused of financing the expansion of Wahhabism which promotes, among other things death of infidels and subjugation of women. Given this, some experts see Riyadh’s announcement to create Muslim countries’ coalition merely as a phony display of intent to wage a war against terrorists.

Nonetheless, question is raised that when the US and allies are already leading an anti-ISIS alliance in Syria, will Saudi Arabia-led coalition work?  It may work profoundly on sharing of intelligence and in giving ISIS a tough time in re-grouping and in generation of resources. But taste of pudding is in eating. Only after alliance is formed and its nitty-gritty from logistics to participation of number of troops to use of weapons-is stitched together then only it would be seen and evaluated whether Riyadh-headed coalition would work or not. Yet need of hour is true and non-partisan stand against terrorists.