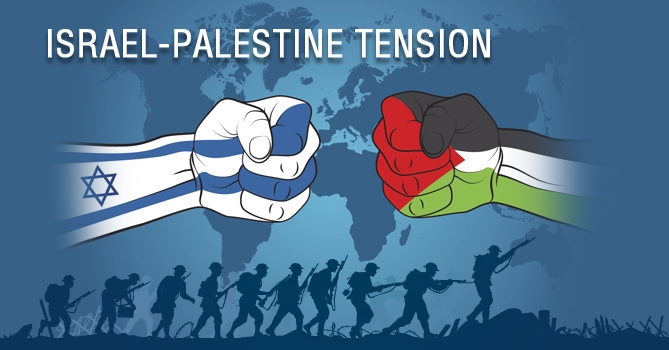 Israelis and Palestinians are in the grip of fresh wave of tension. In fact, weeks of renewed violence, which included stabbings of Israeli civilians and clashes between Palestinian and Israeli forces, climaxed when a group of Palestinians in the West Bank set afire a compound that housed Joseph’s Tomb – a religious site which is highly venerated by Jews. Since 2011, this is the second time Joseph’s Tomb has been targeted when vandals painted Swastikas on its walls. It is said the incident of torching was fallout of Israeli troops’ move to tear down homes in the West Bank of those suspected to be terrorists. But media reports suggest a different story. They say the torching of highly venerated Jews’ religious site took place after Israeli authorities barred around 40 Palestinian men from attending prayers at Al-Aqsa mosque in Jerusalem on October 16.  Al-Aqsa mosque has been a flash point between Israeli and Palestinians. Revered by both Jews and Muslims, tension flared up over this East Jerusalem-based mosque after rumors were spread that Israel planned to strengthen its right over the complex. These rumors spread through social media sites were given a splash in news outlets controlled by Hamas, Islamic Jihad and others. Palestinian leaders alleged that Israel was drawing up plans to limit Muslim access to the mosque or even destroy the site.

Tel Aviv repeatedly denied such claims, yet it served as a fodder for the agitated Palestinian youths and with this, stabbing spree in the West Bank and Gaza Strip began. In the ensuing clashes, at least 37 Palestinians and seven Israelis were killed.

But it was unexpected that reaction would get volatile so much that it would take a toll on Joseph’s Tomb. Even the Palestine Authority which governs Palestinian land was enraged by the incident. “These kinds of acts or any other acts that violate the law and order…offend our culture, religion and morals,” Palestine Authority President Mahmoud Abbas said while ordering the setting up of an enquiry committee to investigate the incident. But the move failed to placate Israel, indicating that the days ahead would further shred fragile peace in the region. In view of mounting tension between Israel and Palestine, international leaders, including U.S. President Barack Obama called for restrain from both sides. He appealed to political leaders from both sides to avoid indulging in fiery rhetoric. “We believe that it is important for both prime minister (Benjamin) Netanyahu and Israeli elected officials, and president (Manmud) Abbas and other people in positions of power, to try to tamp down rhetoric that may feed violence or anger or misunderstanding,” Obama said.

Given the upsurge in tension between Israel and Palestine, the United Nations Security Council held an emergency meeting and called both parties to maintain calm. In any case, however, city of Jerusalem captured by Israel from Jordan in the 1967 War, has been a bone of contention between the two sides for years.  It is said that after capturing the city, which houses Al-Aqsa mosque, Israeli handed over the control of the mosque to Waqf, a Muslim religious institution. Since then a status quo has prevailed under which Jews are allowed to visit the site but not to pray there. But this arrangement is challenged by a minority within Judaism. They want assertion of Jewish right of prayer over the site where Al-Aqsa mosque is located. In fact, in the same campus both Al-Aqsa mosque and Mount Temple, one of the most important religious sites of Jews is located. Officially, Israel maintains that it has no plan to change the status quo over the mosque, but it has put police force to monitor the site where it is believed radical Muslim groups use Al-aqsa mosque to smuggle in fire bombs, pipe bombs, Molotov cocktails and stones to attack Jews coming to the Temple Mount site. This fuelled rumours of Israeli incursions into the mosque. And the resultant incidents are there before the world. Eruption of clashes between Israeli and Palestinians is taking a toll on innocent lives. World leaders are calling for de-escalation of tension. Nonetheless, for the moment public attention is drawn towards the forthcoming meeting between Israeli Prime Minister Benjamin Netanyahu and U.S. President Obama. Whether the current situation in the region improves or not following the two leaders meeting is a million dollar question.