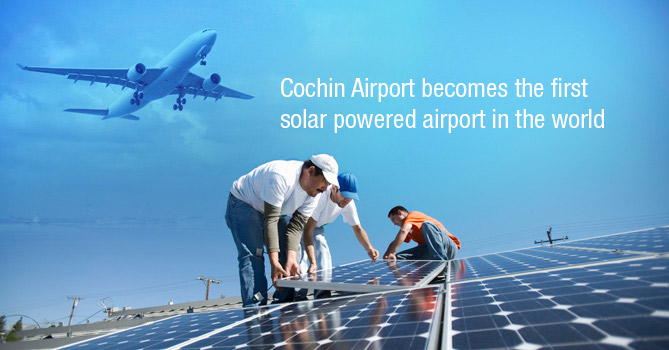 India has mega plans for generating 100,000 MW of electricity from solar power by 2022. Towards this, the government has been encouraging the use of solar power generating options from roof-top solar systems to commercial grid-level farms. For a country that gets 300 days of clear sunshine in a year in most parts of the country, India has been slow to go the solar way. But with the new government taking over in 2014, renewable energy, especially solar, has got a major boost.

Cochin International Airport, located in the beautiful and green southern state of Kerala on India’s west coast, decided to use solar power as an experiment. In 2013, the management first installed 400 rooftop photovoltaic panels to meet a part of their daily energy needs. The results were encouraging enough for the management to decide to set up a full commercial sized 12 MW solar farm, spread over 45 acres using 46,150 photovoltaic panels, near the existing cargo complex. The solar plant generates around 50,000-60,000 units per day.

In August this year, Cochin Airport became the world’s first solar powered airport to fully meet its daily need for energy. The surplus power generated is banked with the national grid for exchange during low-sunlight periods or monsoons, which can be fairly extended in this region.

Cochin Airport is India’s seventh busiest airport, handling around 1000 flights per week. The biggest gain from going the solar way is environmental. The airport is expected to generate around 18 million units of solar power annually which effectively offsets carbon emissions by 300,000 metric tons over 25 years. The generated energy could power 10,000 homes for a year and can be compared to planting three million trees. Whichever way one looks at it, the positive impact on the environment makes solar an attractive option.

On the commercial side, the management expects to recoup its investment of around $ 10 million within six years. With the project being successful in going completely off the grid, the government is now looking at replicating this model in other airports and greenfield projects.

The next big solar project being planned is at the Netaji Subhash Chandra Bose Airport in Kolkata with a solar farm capable of generating 15-20 MW of power and spread over 55 acres of land. It is estimated to meet 60% of the current demand.

The other airport in line is the Jaipur International Airport in Rajasthan, where a 1.8 MW solar power plant is being planned to augment its existing 100 kw rooftop solar power capacity. Most existing airports are in the process of introducing roof top solar systems, while all new airports being planned will incorporate several green and renewable technologies and also include water harvesting.

The world’s biggest solar plant coming up in India