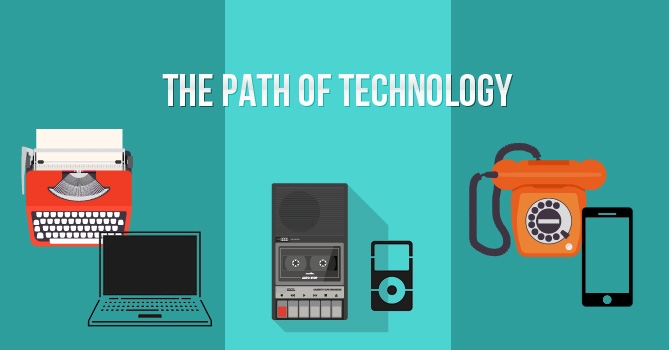 Curiosity and need have been triggers that have driven the human mind to explore, discover and invent. Modern day technology has evolved to touch every aspect of human life, with ICT (information, communication and technology) touching our lives more visibly and directly.

Gadgets that we use today are a result of innovative use of technology previously developed by different people. Engineers, Scientists and innovators have used these effectively to further innovate and build gadgets that make life easier for all humans. And not all technology has been developed in progressive sequence.

The evolution of communication amongst humans dates back to 3000 B.C. This is depicted in carvings on rocks called Petroglyphs, which were first used to communicate through drawing of pictures. This led to the development of the Phoenician Alphabet. As languages developed, so did the need to access and communicate information. This need led to development of the telegraph in early 1800s. It was soon followed by an innovative means of communication in secret when Samuel Morse developed the Morse Code in 1835.

But the most remarkable invention for communication was developed by Alexander Graham Bell who built the first telephone in 1876. He was the founder of AT&T. Developing the phone was the first and most revolutionary step that has evolved into smartphone technology that we are so familiar with today.

By 1894, Guglielmo Marconi had developed the radio. He founded the Wireless Telegraph and Signal Company in 1897. By 1900, the company evolved into Marconi’s Wireless Telegraph Company. In 1963, Marconi Company Ltd was established and in 1987, it became GEC-Marconi Ltd. After various takeovers and mergers, it exists through various companies in different fields related to electronics and communication.

Charles Babbage, the British mathematician and inventor, is credited with developing the first automatic digital computer in the mid-1800s. All the above inventions together formed the foundation that led to ICT in contemporary times.

Based on the initial works of Charles Babbage, the first large scale automatic digital computer, Mark 1, was developed by IBM and Harvard University in 1944.

This was followed by the ENIAC in 1946 that was specially built for the US Army. Software languages like Fortran and COBOL soon followed. In 1956, IBM developed IBM 305, the first hard disk with a capacity of 5 MB. BASIC was first developed in 1964 and by 1969, Advanced Research Projects Agency Network – ARPANET was created.

Probably the most addictive and indispensable gadget today, the smartphone has quickly evolved into a platform for information, communication and entertainment on the go and in real time.

Entertainment has become central to our lives and UHDTV is an aspirational gadget that brings theater-like experience into our homes.

Music lovers have never had it so good with curated music service from companies like Apple and Spotify. Music enthusiasts can listen to their preferred genre of music in real time and also build their own playlist without having to block precious space on their own device.

Accessing services does not require purchasing, downloading and storing of numerous tools that are now available for a variety of applications. Simply subscribe to a paid or free service on the cloud and access tools from anywhere and in real time. Cloud based services are still evolving with its full potential yet to be tapped.

Two areas where technology is revolutionizing lifestyle is access to medical consultation and personal devices that can be operated by individuals without expert intervention.

With smartphones running on 4G – 5G technology enabling faster voice and data transfers, remote medical consultation is fast emerging into mainstream medical practice. With technology getting smaller and smarter, a wide range of medical devices are now available for self-monitoring and timely administration of prescribed medication.

LiFi is all set to replace WiFi that has already reached its capability limit. With LiFi, it is now possible to download 18 full length movies in a wink. In lab tests, download speeds of 224 GB per second have been achieved and is widely expected to replace WiFi as the next frontier of technology.