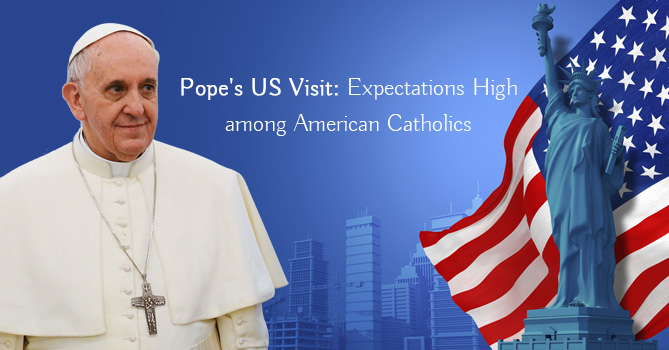 Pope Francis recently visited the US for five days. His visit started from September 22nd and ended on September 27th. His visit started with his arrival at Joint Base Andrews at 16.00 hours. On the next day, the proceedings started with a welcoming ceremony at the White House where he personally met President Barack Obama. Next, he led a Papal parade along the National Mall as well as the Ellipse. Then he also attended the midday prayer with bishops of the US. It took place at Saint Matthew’s Cathedral. Later, in the day, he headed the Junipero Serra Canonization Mass, which took place at the Basilica, National Shrine of the Immaculate Conception.

September 24th was the Pope Francis’ last day in Washington DC. His day started with his arrival at the Capitol. Here he addressed the House of Representatives and members of the Senate in a joint session of the US Congress. He also appeared for a short while at the Capitol’s West End. Later on, he visited the St. Patrick’s Catholic Church as well as the Catholic Charities affiliated to the Archdiocese of Washington. He left for New York that very day and attended the Evening Prayer held at St. Patrick’s Cathedral of New York.

On September 25th, Pope Francis visited the United Nations General Assembly and took part at the multi-religious service that took place at the 9/11 Memorial and Museum, World Trade Center. He also visited the Our Lady Queen of Angels Schools, which is located in East Harlem. The Pope was the central attraction at the Papal motorcade that passed through the Central Park. He also attended a Mass at Madison Square Garden.

The formal reason for Pope’s visit was that he was invited by John Boehner, the Speaker of the House, to come and speak to the Congress during March this year. At 51 million, Catholics are presently the single biggest religious group in the country and thus, it had been expected that he may come calling sooner rather than later. Pope Francis is, however, the first of his kind to have addressed a joint session of the Congress. However, it also needs to be kept in mind in this context that the demographic makeup of Catholics is changing and the Pope may have visited in order to check whether the Church had been able to keep pace with it or not.

The northeastern part of the country was the traditional stronghold of Catholicism in the US. However, that bastion is being eroded even as we speak. A Pew survey conducted in 2015 has found that about 2% of adults in the US have converted from other disciplines, while 12% have left the same. This makes it the worst off among the religious denominations in the US in terms of the ratio of losses and gains of followers.

Meanwhile, people from Latin American countries have been migrating to the US and this has generated a new stronghold in the southwestern part of the country. Pew states that while in 2007, 29% of American Catholics were of Hispanic origin, in 2014, the figure has gone up to 34%. Pew has remarked that this rate of growth will only keep on increasing because of their low average age compared to non-Hispanic Catholics. It has also pointed out that most of the Hispanic people in the US are Catholics. Laurie Goodstein, the national religion correspondent of New York Times, feels that the biggest challenge for Pope Francis will be to reach out to the wide array of Catholics spread across the country.

Indeed, there is a wide cross-section of people among ones who practice Catholicism in the US. There are ones who have been faithful, while there are others who have lost their faith. There are people who are liberal in their adherence, while there are the traditionalists who follow everything in a staunch manner. In some areas, there are the Caucasian people who belong to the working class and are forever anxious and in other areas, there are lots of immigrants who do not get the proper facilities owing to a variety of reasons.

Goodstein also notes that most of the leaders at the US’ Catholic churches are Caucasians, stating that only around 28 from 270 bishops are of Hispanic origin. This makes it a percentage of 7.5%. This was also one reason as to why Spanish, the mother tongue of Pope Francis, was used as well in many of the addresses made by the religious leader. In fact, Jose H Gomez, an Archbishop of Los Angeles, has said that Pope Francis is himself aware of the changing dynamics, the Hispanic Catholic history of the US, and the fact that going forward people of Latin origin will count as the majority followers of the Catholic Church.

It is well known that Pope has a liberal stance on issues such as climate change, immigration, and inequality. However, his opinions on social issues like marriage among people of the same sex and abortion are more akin to what conservatives have to say. The fact that Pope Francis had opted to speak before the Congress meant that he was going to be forthright with his views. This has attracted some opposition from the likes of Republican Congressman from Arizona, Paul Gosar, who chose to boycott his address. Other Republicans too have expressed dismay at the fact that the Pope is going to deal with such supposedly-sensitive issues. On the other hand, his views on the social issues could have put the Democrats at unease. The act of canonizing an eighteenth century Spanish missionary named Junipero Serra is also supposed to have evoked some controversy given the treatment that he meted out to thousands of Native Americans while converting them to Catholics.