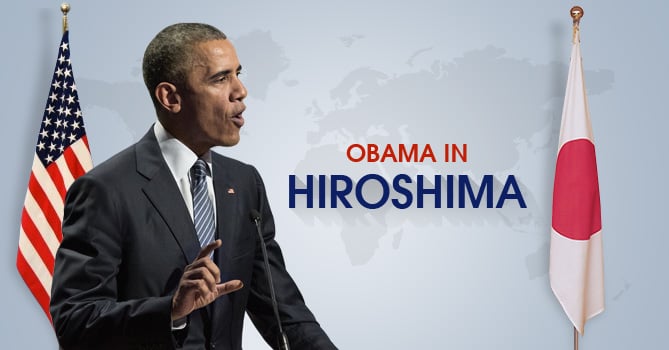 US President Barack Obama became the first sitting American President to visit the Japanese town of Hiroshima, 71 years after it was targeted by a nuclear weapon. The US Army Air Forces (USAAF) dropped an atomic bomb on the city on August 6, 1945, during WWII. President Obama’s visit came against the backdrop of USA’s highly strategic ‘Pivot to Asia’ foreign policy objective that seeks to increase US influence in the region to counter the growing might of China.

Stopping short of a formal apology, President Obama made a deeply poignant speech at the Hiroshima peace memorial, calling for a ‘moral revolution to accompany technological progresses’. The Hiroshima incident, according to the President, reminded the humanity of its potential to self-destruct causing devastation and death. That the notion of some higher cause can blind us to the simple truth that the very technology which has led to human emancipation and progress also gives us the capacity for “unmatched destruction”, is the greatest contradiction of the humankind. Taking a moral stand on religious fundamentalism and growing nationalism, President Obama sought to also point out how both religion and nation that once grew out of the ideas of love, compassion and common brotherhood are now increasingly marred with violence, oppressing and dehumanizing those that are different.

Obama laid great emphasis upon the fact that while scientific revolution had the capacity to liberate human imagination and creativity, it was also a potent weapon which had turned us into “efficient killing machines”. To match the technological progress, therefore, an equivalent progress in human institutions is required, a sort of a “moral revolution.” Mourning the thousands who perished in the atomic bombing on that fateful day, President Obama called for humanity to take responsibility for the violence that had been inflicted upon innocents and ponder over the future course of actions that would prevent such sufferings from occurring again.

President Obama’s speech came at a time when the world is already witnessing the fallout of US-initiated military actions in Syria and Iraq. That the quest for democratic governments in these nations has led to bloodshed which saw thousands dead and millions displaced while we are yet to witness any coherent global action against the violent wars in the Middle East, raises questions on the role of the US as the champion of peace.

What President Obama emphasized in his speech was the elimination of nuclear stockpile to prevent a recurrence of incidents like Hiroshima, but his words failed in intent for their apparent lack of recognition for the catastrophic violence the world currently witnesses in the Middle East which has left scores dead. His continued emphasis on ending conflict through diplomacy sounded more like utopian ideals and less like concrete foreign policy practices of the US which found itself involved in two major wars in the last decade.

US Needs to Deepen Ties with Asia

President Obama’s visit to Hiroshima must be seen in the light of the fact that the US faces greater competition from China in Asia. To rein control of its diplomatic strengths in the region, the US has sought to deepen its ties with countries in Asia, the pursuit of which began under the Obama administration’s ‘Pivot to Asia’ initiative. Success of this practice requires a deepening of ties between the US and other East Asian and South East Asian countries such as Japan, Vietnam and South Korea which are being engaged primarily to counter the growing influence of China in the region. Another major concern for the US in the region is North Korea which is furiously building a nuclear stockpile and could potentially disturb the military balances in the region.

Solutions for Problems Beyond Nuclear Stockpiling

The US President’s speech, while being high on content and symbolism, seemed lacking in intent and initiative. The global peace, which leaders around the world envisage, needs out-of-the box solutions for problems that have now moved beyond just nuclear stockpiling. Populations around the world face abject poverty, hunger, displacement and violence. Religious fundamentalism and extremism threaten minority identities and existence. Ethnic violence has spread across societies and what the world is witnessing today is more of intra-country war than inter-country war. The calls for peace, therefore, require the international community to address issues of power and identity which have now gained catastrophic proportions across the world. The “Moral Awakening” referred to President Obama in his speech is much more than the simple awareness of the destructive potential of atomic warfare. This awakening must go beyond nation-states and look at individual and collective lives if we are to prevent another human catastrophe.