Explore Map of Nevada Cities showing Nevada. It is the seventh-largest state in the United States. It is located in the Mountain West, Western and southwestern regions of the country. Nevada is the 34th most populous state in the country. 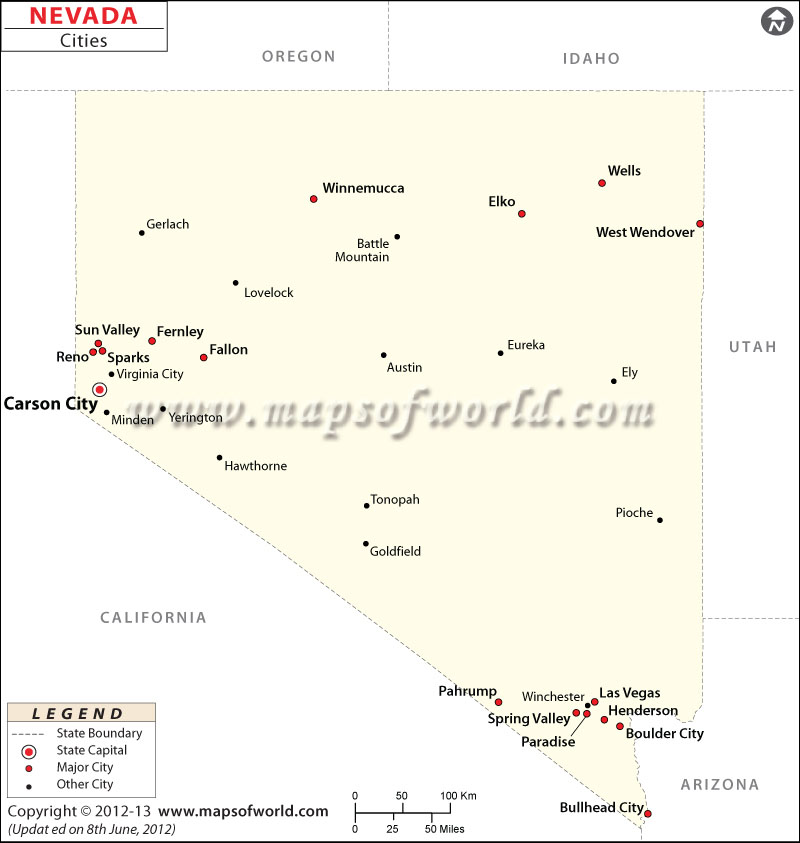 The ‘Silver State’ has 16 counties. Nye County is the third largest county in the contiguous US. Located east of Lake Tahoe, Carson City is the state capital.

Las Vegas is the largest city by population in Nevada. Las Vegas, which was founded in 1905, had a population of 632,912 inhabitants, as of 2016. Shining amidst the sun-freckled valleys of the Mojave Desert, the city of Las Vegas – also known as “Entertainment Capital of the World” – is the most populous city in the state. A four-mile-long stretch of Las Vegas Boulevard has over 75,000 miles of neon lights. Besides a world of temptations, Las Vegas is also a gateway to the Valley of Fire State Park, Spring Mountains, and Red Rock Canyon National Conservation. Cities that have a population of more than 200,000 people are Henderson, Reno, and North Las Vegas. Carson City is the capital of Nevada. The city comprises a population of around 54,742 people. Caliente, which is located in Lincoln County, is the least populated city in the state. As of 2016, the city comprised an estimated population of 1,108 people.

Getting In and Around

Interstate Highway I-80 and I-15 are primary roads in Nevada. State Route 375 and U.S. Highway 50 are other popular roads.

Where is Las Vegas

Longitude and Latitude of Nevada Map

This website uses cookies to improve your experience. We'll assume you're ok with this, but you can opt-out if you wish. Accept Read More