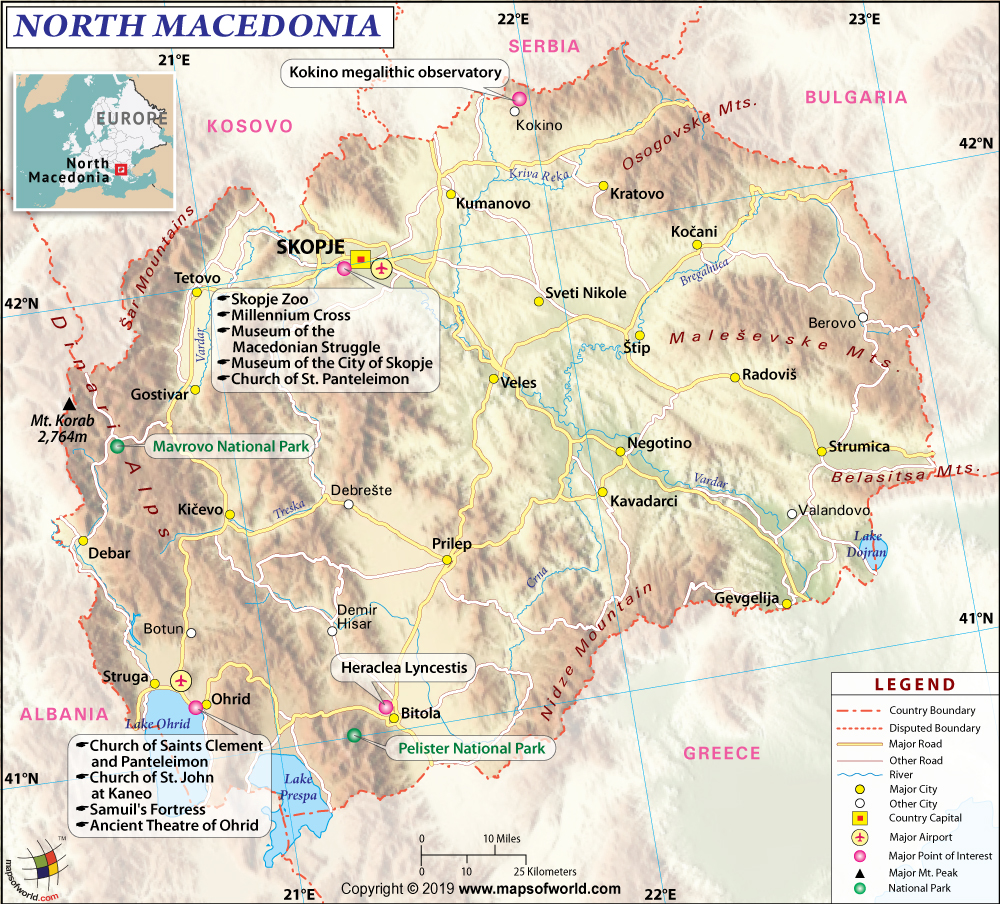 The Republic of Macedonia is a relatively young state, once part of the former Yugoslavia, it only became independent in 1991. However, its history dates back much further, with early civilizations arising around 7000 to 3500 BC. Several cultures inhabited Macedonia in antiquity, including Paeonian, Molossian and Illyrian tribes.

Ancient Macedonia’s history extends back to the Kingdom of Macedon, with Caranus as its first king around 808 BC. Under the rule of Philip II, the kingdom expanded to include many neighboring territories in 356 BC. He was succeeded on the throne by his son, Alexander the Great, who made Macedonia an important regional power, extending the territory further still. The kingdom was conquered by the Roman Empire, becoming the Roman province of Macedonia in 146 BC.

The Slavs invaded Macedonia around 580, which was then part of the Byzantine Empire, and over the 7th century, the Bulgars gained control of the Macedonian region, with the Tsar Boris I in power. Basil II of the Byzantine Empire regained control of the region in 1014, and remained in power with a brief occupation by the Normans, followed by the return of the Bulgarian Empire in the 13th century. The Serbian Empire ruled in the 14th century, until the entire Balkan region was conquered and absorbed by the Ottoman Empire, lasting for 500 years.

Macedonia is a landlocked country located in the Balkan Peninsula. The terrain is largely forested and mountainous, with 16 mountains that have an elevation greater than 2,000 meters (6,562 feet). The two major mountain ranges are the Sar Mountains and the Osogovo-Belasica (Rhodope) range. The highest point is on Mount Korab, which stands at an elevation of 2,764 meters (9,396 feet).

The longest river in Macedonia is the Vardar River, which flows 388 kilometers (241 miles) across the country, and is considered the lowest point in the country. Other rivers are the Black Drim and the Binacka Morava. The major lakes in Macedonia are Lake Dojran, Lake Prespa, and Lake Ohrid. The latter is one of the oldest lakes in the world.

Macedonia has many beautiful scenic sites that draw visitors from around the world. Lake Ohrid is a UNESCO World Heritage Site, as well as one of the oldest settlement locations in Europe. The 3 million year old lake is surrounded by beautiful beaches and a historic city, which has architectural marvels including several ornate churches, a fortress, and theater. Macedonia also has a few national parks, including Galicica National Park, Mavrovo National Park, and Pelister National Park.

Macedonia’s capital, Skopje, is also its largest city, and features historic sites, including Porta Macedonia a triumphal arch for the country’s independence, and the Stone Bridge, which dates back to the 6th century and the Byzantine Empire. Skopje also features the Kale Fortress, and the city’s most famous monument, the statue of a Warrior on a Horse.

The major international airports in Macedonia are the Alexander the Great Airport in Skopje and St. Paul the Apostle Airport in Ohrid. Visitors can travel to Macedonia by train or bus as well, with service to Greece, Serbia, Kosovo, Bulgaria, Slovenia, Croatia, and Turkey between the two options. Other buses travel as far as Germany, stopping in Austria, Switzerland, Italy, and Slovenia. Trains and buses are also available for transport within Macedonia. Car rentals are available, and there are many roads, but many are toll roads and not all are well maintained. To get around towns, taxis are the most common method of transportation.

This website uses cookies to improve your experience. We'll assume you're ok with this, but you can opt-out if you wish. Accept Read More