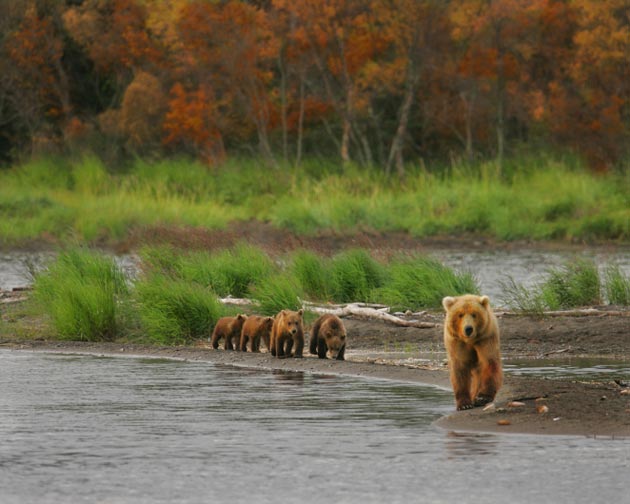 Bears at the Katmai National Park at Alaska

Katmai was first established as a National Monument in 1918, to protect the area surrounding Novarupta volcano, which formed the Valley of Ten Thousand Smokes with its pyroclastic flow after the 1912 eruption. The National Monument was later expanded to cover over 4 million acres, becoming Katmai National Park in 1980. Katmai National Park was named for Mount Katmai, a stratovolcano located within the park in southern Alaska, USA.

Known for its volcanoes, brown bears, salmon, rivers, and rugged coastline, Katmai is a vacation destination for outdoor activities and adventures such as camping, hiking, backpacking, skiing, fishing, and kayaking. There are about fifteen active volcanoes in the park, notably Mount Martin, Mount Mageik, Trident, Novarupta, and Mount Katmai, which are situated within the preserve. Fourpeaked Volcano became active in 2006 after 10,000 years of lying dormant, demonstrating that there may be more active volcanoes that are yet unknown.

Also located in the park are archaeological sites dating back to prehistoric traditions. A glacier formed inside Mount Katmai, and a lake formed in the caldera. Coastal areas of the park, including Hallo Bay, Kukak Bay, and Chiniak, are popular for their clams and other food sources.

Brooks Camp is the developed area of the park, which offers bear viewing platforms for visitors to check out the nearly 100 annual brown bears that catch salmon in the river.

Where is Katmai National Park ?

Katmai National Park is located in Alaska, on the Alaskan Peninsula across from Kodiak Island. The nearest city of King Salmon is the headquarters of the park, and is located along the Brooks River. Brooks Camp is accessible by boat or a small plane, but not cars.

The park is open year-round, but the best months for viewing the bears are June and July at Brooks Camp and Brooks Falls, or August and September at the lower river. Summer brings weather ranging from 30-80 degrees Fahrenheit, which can include rainstorms, winds, and many insects. Winter can be very cold, rainy, and snowy. While this can be a very beautiful time to visit Katmai, there are fewer tourists and visitors need to be prepared for a variety of weather conditions.

There is no entrance fee to the National Park. Tourists need to pay for other facilities such as camping fees, commercial filming and photography.