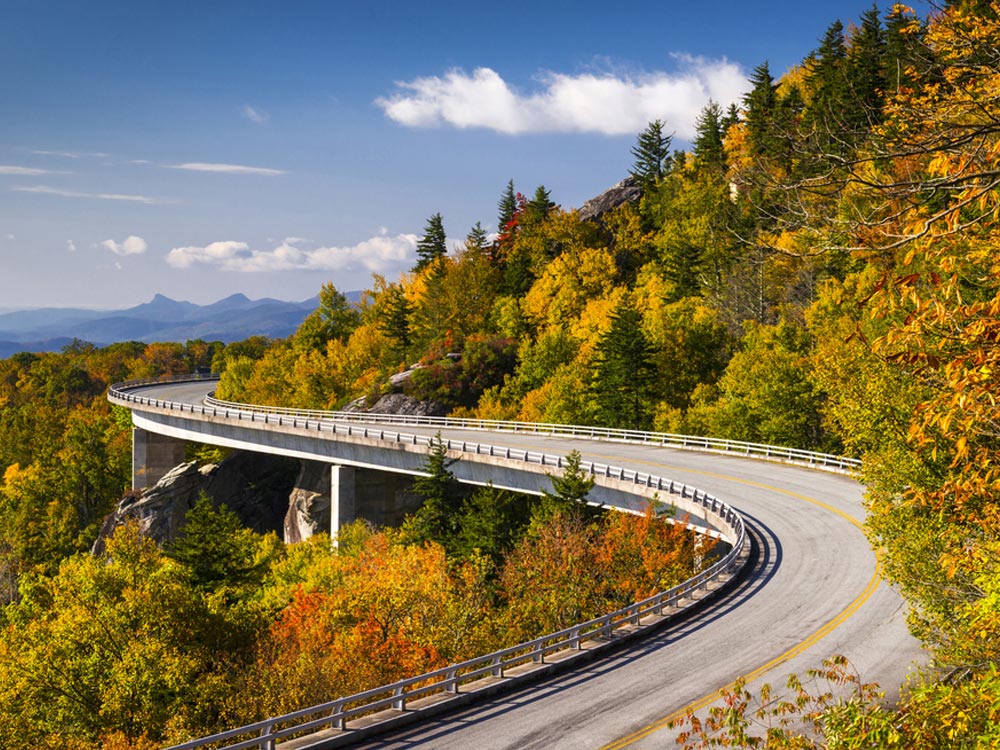 The Blue Ridge Parkway runs from the southern terminus of the Shenandoah National Park’s Skyline Drive at Oconaluftee in the Great Smoky Mountains National Park. Moving through the parkway is free, though commercial vehicles have to take approval from the Park Service Headquarters near Asheville. Due to extreme variations in weather conditions, there are often closures of the pathways. The highest speed limit of the vehicles allowed is 70 km/h.

There are short connecting roads between this highway and other highways, though there is no possibility of direct exchanges with interstate highways, you may easily view wildlife and other sights, without waiting for any cross-traffic to pass. The zero milepost starts at the northeast end in Virginia and goes to mile 469 at the southern end in North Carolina. The mileposts are present on the west side of the road. Running across different states, the Blue Ridge Parkway, North Carolina, passes through major towns and cities like Waynesboro, Roanoke, and Galax in Virginia as well as Boone and Ashville in North Carolina. The Blue Ridge Music Center is situated in Galax whereas Mount Mitchell can be reached via a state road from the parkway at the milepost 355.4.

During spring, while going from valleys to mountains, wildflowers like rhododendrons and dogwoods cover the parkway. In summer time, flowers like daisies and asters can be seen, and autumn foliage can be seen later in the year. There are major trees at lower levels of the land like oak, hickory as well as tulip tree and buckeye in the middle elevation. In the highest elevation, one comes across fir and spruce.

Where Is Blue Ridge Parkway?

Passing through 29 Virginia and North Carolina counties, the parkway is a major tourist attraction in the whole of Carolina in US.

Also known as America’s favorite drive, the Blue Ridge Parkway looks the best during autumn season when the leaves change color and begin to fall.

There is no fee for entering the parkway. But facilities such as camping, golfing, etc. are chargeable.