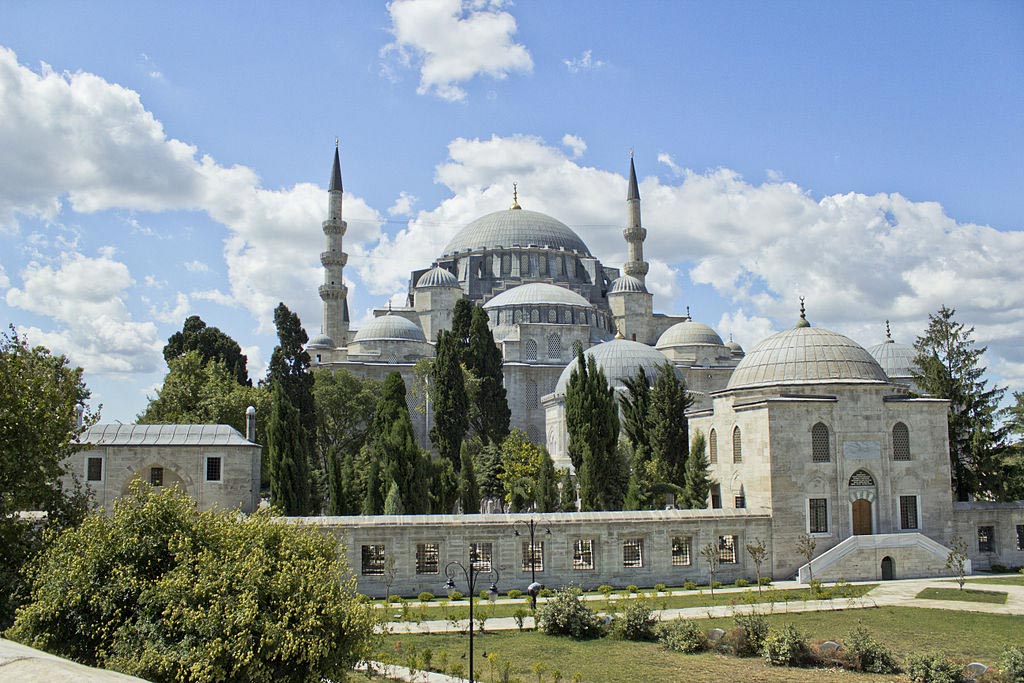 The Süleymaniye Mosque overlooking the Golden Horn is a striking landmark of the city of Istanbul. A part of the mosque bears resemblance to the Byzantine basilica, especially, the Hagia Sophia. In contrast to the imposing size, the interior of the mosque is minimalistic. The striking feature of the mosque is the fineİznik tiles in the mihrab. The mosque bears four monumental columns, one brought from Baalbek, one from the city of Alexandria, and two from the Byzantine palaces in İstanbul. İbrahim the Drunkard worked upon the lovely stained-glass panes of the windows. The walls of the mosque are embellished with the verses from the Koran. The mosque has reserved spaces for the women in the form of galleries located over the entrance and on the sides. The building of the mosque is sturdy enough to have survived many earthquakes, without a single crack.

The külliye aka the mosque complex of the Süleymaniye Mosque is replete with public amenities, such as hostel, kitchen with the Darüzziyafe Restaurant, Hospital, Hamam, Madrasa, etc. Located adjacent to the restaurant is the Lale Bahçesi, a get-together place for the youngsters. The Uni students gather here to drink, chat, or enjoy hookahs. The quondam medrese has turned into a library and you would find an array of small restaurants serving fasulye and pilav (beans and rice). The central chamber of the mosque is topped by a 53-meter-high dome with a diameter of 26.50 m. This dome rests upon four minarets named as elephant-feet. A beautiful fountain is centrally placed in the inner court of the mosque.

The architect Mimar Sinan designed the mosque. He chose the area outside the mosque’s walled garden as the place for his sepulture. Other tombs in the mosque are of Süleymanand Roxelana.

Where is Suleymaniye Mosque?

The Suleymaniye Mosque is situated in Turkey, Istanbul. The Istanbul Atatürk Airport is located at a distance of about 19.9 km from the mosque. You may use tram Beyazıt-Kapalı Çarşı to reach the mosque.

The mosque opens daily. Entry to the mosque is prohibited during the prayer times.