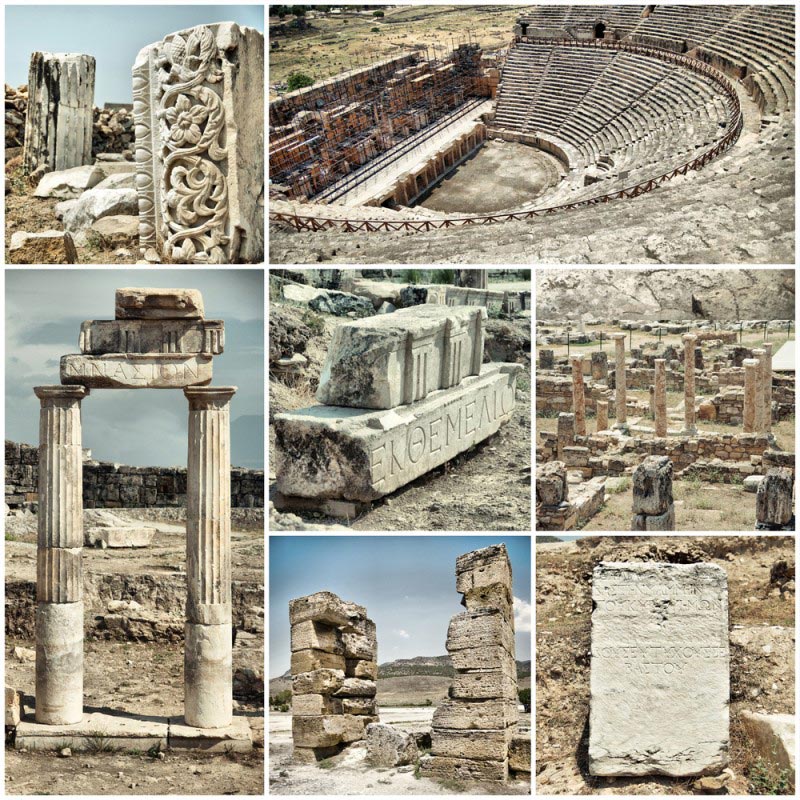 Various Pictures of the Ruins of Hierapolis City in Turkey

Once an ancient city in Phrygia, Hierapolis has been known for its natural hot springs since the 2nd century BC. This complex consists of Roman baths, a library, a gym, an 12,000-seat amphitheater, a burial site, and several temples. Hierapolis is located in modern-day Turkey, and home to the tourist attraction called Pamukkale (Turkish, meaning “cotton castle”), where tourists can swim in the hot pools, and explore the travertine terraces.

Around the beginning of the 3rd century BC, the Phrygian people built a temple that formed the center of Hierapolis. The spa was given to the king of Pergamon Eumenes II by the Romans in 190 BC, when it became part of Pergamon. The spa was utilized by doctors for its therapeutic healing powers, believing that the hot waters had natural medicinal benefits. The last king of Peramon, Attalus III, died in 133 BC, leaving the kingdom to become a part of Rome. The city was destroyed in a series of earthquakes during Roman rule, first in 17 CE and later in 60 CE, and was later rebuilt as a Roman city.

Visitors to Hierapolis can see the Doric style Temple of Apollo, though the foundations are all that still stands. Like typical Apollo temples, the structure was purposely built in a place with frequent seismic activity. Also at the site, the Plutonium is a cave that seeps toxic gas, killing people who enter the cave. The ancient people believed this was the god of the underworld, Pluto’s way of showing his power.

A necropolis on site features tombs and sarcophagi, notably the Sarcophagus of Marcus Aurelius Ammianos. The Roman Bath is now home to the Hierapolis Archaeology Museum since 1984. Art at the site includes friezes, featuring scenes from mythology.

Hierapolis is located in southwestern Anatolia, in historical Phrygia. Today, the ruins are part of Turkey, near Pamukkale. The nearest city is Denizli, which has an airport, train and bus station. Minibuses transport visitors from Denizli to Hierapolis and Pamukkale.

This region experiences a Mediterranean climate, with mild winters and warm to hot weather lasting from May to October.