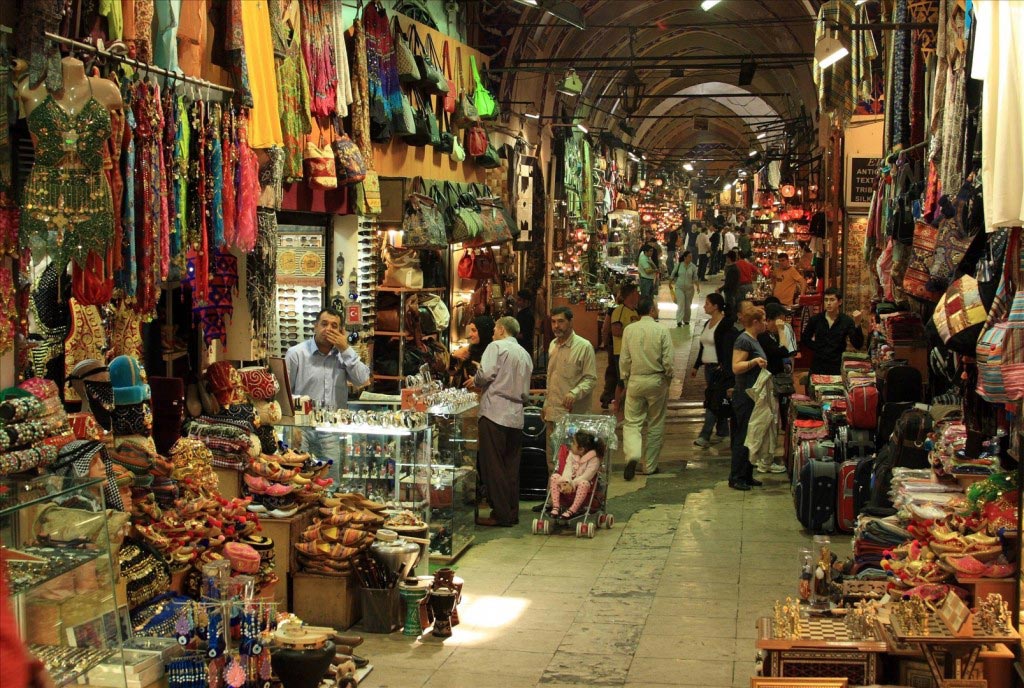 One of many hallways at the Grand Bazaar of Istanbul, Turkey

One of the world’s first shopping malls, the Grand Bazaar in Istanbul, Turkey, is also one of the largest covered markets today. The strategic location of Istanbul helped it in emerging as the hub of trade and commerce in the Mediterranean. There are four main gates to the Grand Bazaar – one at each of the two major streets, whose intersection is at the southwest corner of the shopping center.
The market’s streets are named for the items sold in their zones, like jewelry, furniture, carpets, leather goods, clothing, and books. The famous Bazaar is a social meeting place, where the community goes to interact, and have discussions over coffee, though there were originally no restaurants at the market. Until the mid-nineteenth century, trade at the market was very different from today, with a lack of competition between sellers and a single fixed price for items.

The Grand Bazaar is popular for the following items:

Bargaining is pretty common in the Grand Bazaar. As it is just under one roof, so sometimes when there is a crowd, you may feel dizzy.

Today, the structure is being renovated to upgrade its heating, lighting and other facilities. Some argue that it has become too westernized in recent history, but there are still many traditional parts to be found.

Just like many monuments of historical significance, the Grand Bazaar also survived a lot of calamities. The first fire ravaged the complex in 1515; while another occurred in 1548. Thus, the bazaar saw frequent renovations until 1980. Since then, it has not been attacked by any of the calamities.

Where is Grand Bazaar?

The Grand Bazaar is open every day of the week except Sunday, and is also closed for various government holidays. The market is much more crowded on Friday and Saturday, which can increase opportunities for pickpockets, and make it more difficult to get a good price.

Though the Grand Bazaar is an indoor market, weather can still affect a visit to the market. Summers in Istanbul are hot and humid, while winters are cold, rainy, and sometimes snowy. There really isn’t much of a dry season in the city, and flash floods sometimes occur during the summers, even though it is the driest season. The best months to visit in terms of weather are May, June, September and October.