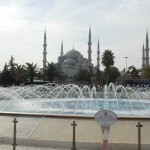 Picture of the Blue Mosque 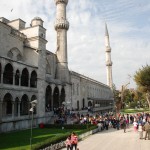 Tourists at the Blue Mosque 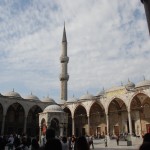 Courtyard of the Blue Mosque 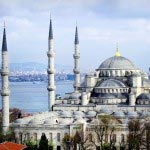 An emblem of the Turkish and Islamic art, the Blue Mosque in Istanbul, Turkey is a place, both of meditation and admiration. This prominent building is listed on the itinerary of every tourist who comes to Istanbul. Built during the reign of Ahmed I, the Blue Mosque (aka Sultanahmet Camii in Turkish) derives its name from the blue colored tiles of the walls used in its construction. It is also called the Sultan Ahmed Mosque, as it houses the resting place of its founder. The mosque has a madrasa. There is also a provision of medical aid at the mosque.

Even though there are three entrances to the mosque, it is suggested to enter the mosque from the west direction for panoramic views. The sybaritic curves of the mosque, the commodious courtyards, sky-reaching minarets, make this Ottoman mosque a doozy of religious places. The interior decor of the mosque is lavishly decorated with the psychedelic paintings. The stained glass and tiles generate luminous effects to complement the vistas. More than 20,000 recherché Iznik tiles were used to embellish the interiors of the mosque.

Located in the Street Atmeydanı Caddesi, the Blue Mosque is about 20 km away from the Istanbul Ataturk Airport. It can be reached within 28 minutes via the Kennedy Cd route. The mosque can also be reached using Light Tram or Metro lines. The nearest Sultanahmet Station is about 200 meters away from the mosque.

The mosque opens at the following timings:

On Saturdays to Thursdays:

The mosque is closed to non worshippers five times in a day, for about 90 minutes, while offering daily prayers.

If you are a non-Muslim, you must avoid your visit during the prayer time, as the mosque is crowded. Also, on Fridays, the time from late morning through early afternoon should be avoided. The best time to visit is the mid-morning time.