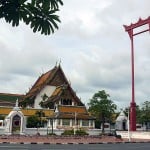 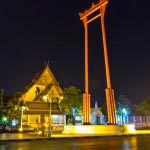 The Giant Swing is one of the most-enjoyed religious sites in Bangkok. The Giant Swing is also known as Sao Ching Cha. Located in front of the Wat Suthat temple, the swing offers an amazing view to all travelers. This great monument was built in the year 1784, following the order of King Rama I.

This wonderful swing majestically stands on Bumrungmueng Road as a sign of the abiding strength of Bangkok. If you are taking a trip around Bangkok, don’t miss seeing this. The ceremonies held here are considered to be one of the 12 royal ceremonies arranged in each month of the Thai lunar calendar in the kingdom of Sukhothai.

According to a legend, during the second lunar month, the priestly class or Brahmanas believed that the deity Shiva descends to the earth for a ten-day residence. Thus, he should be welcomed by great ceremonies involving brave deeds. As a result, the desperate acrobats swung in higher arcs to grab a bag of gold coins hung from a 15-metre bamboo pole. This ceremony saw many deaths. The reign of Rama VII (King Prajadhipok; 1925–35) saw the fading power of the Brahmanas and discontinuation of the swinging ceremony.

Another legend says that when the deity Brahma created the earth, he sent Lord Shiva to look after it. The snakes of Shiva encircled themselves around mountains to keep the earth in place. When Shiva was satisfied that the earth was solid, the snakes went into the sea. The swing ceremony is a re-enactment of this legend. It is said that the the 2 pillars of this swing represent the mountains encircling both sides of the sea. On the other hand, the circular base of the swing represents both the earth and the seas.

Where is Giant Swing? 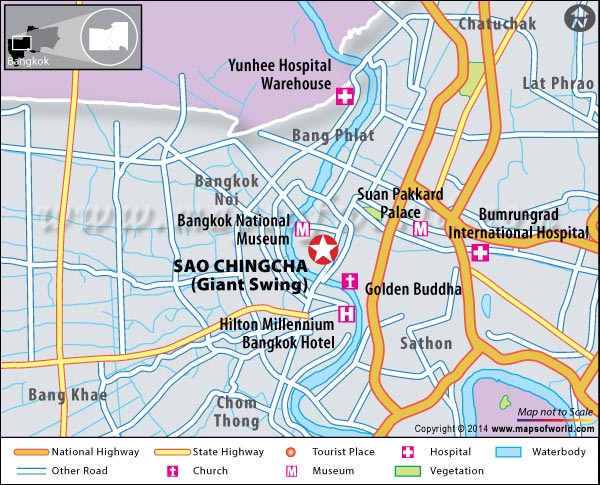 The weather of Bangkok is hot for the most of the year, thus late November to mid-January is the best time to visit as these months are cool.