Gran Via in Madrid 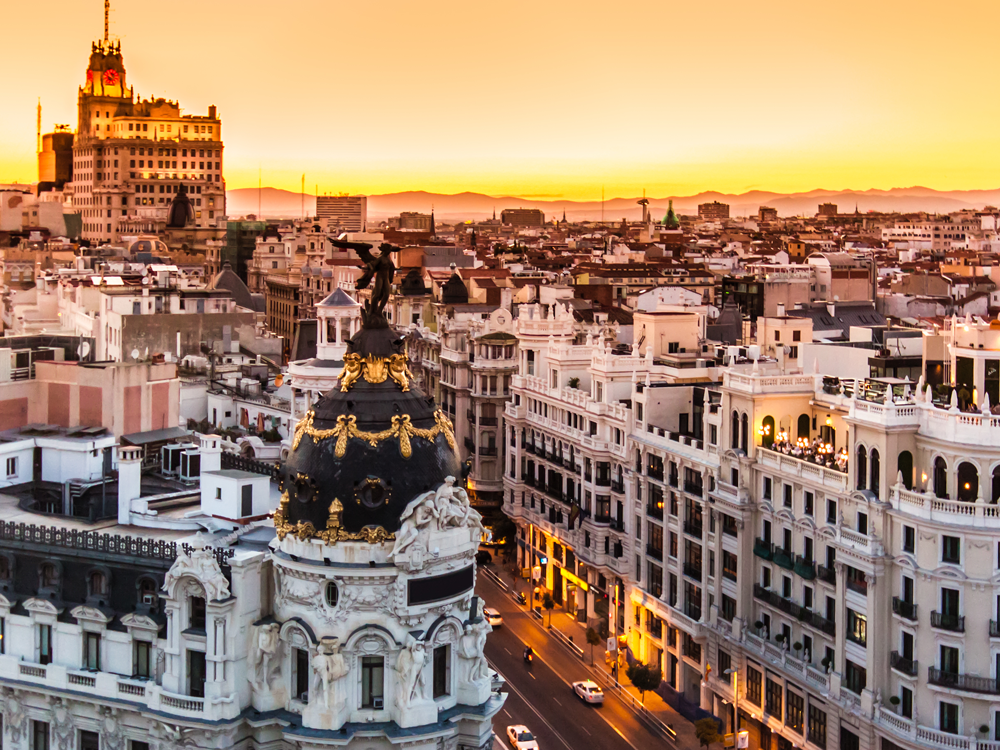 Aerial view of Gran Via, main shopping street in Madrid

Gran Via, – which means Great Way, is a lively street in Madrid filled with entertainment centers like hotels and movie theaters. It has become a tourist attraction because of the architecture of the buildings in this street. The plan to create this street was devised in the middle of the 19th century because of the decision of the urban planners to have a thoroughfare, which can connect the Calle de Alcala with the Plaza de Espana. But to execute the plan many buildings in the area were required to be demolished. Due to this problem, the idea could not take off until 1904, when the plan finally got approval.

This project gave the architects an opportunity to create many modern buildings. The most appealing and eye catching building is the Edificio Metropolis (Metropolis building). This famous building is situated at the beginning of the Calle de Alcala. This is a landmark of the city, and was constructed during the years 1907 and 1911. Jules and Raymond Fevrier, were the architects who designed this building. This building has a statue of a winged Goddess Victoria, which was installed in the year 1975.

Another landmark of Madrid is the Edificio Grassy, which has a tower, and was constructed in 1917. The tower of the Telefonica building that was built during the period of 1926 to 1929 can be seen from the Edificio Grassy building. The Telefonica building is used by the Spanish telecommunications company. When walking through the Gran Via towards the Plaza de Espana, one can find a small square, which is called as the Plaza del Callo. This square can be called as cinematic Madrid, because it contains six cinema theaters, one out of them being the Capitol. The last part constructed in Gran Via was a square, which leads to the Plaza de Espana. This was built in the years between 1925 and 1929. Two skyscrapers were built in the year 1950, which were Edificio de Espana and the Torre de Madrid.

The street of Gran Via is a showcase of marvelous architecture from the early 20th century and a place one must definitely visit in Madrid. As a major cosmopolitan city, Madrid has many things to offer. The famous bullfights, flamenco dances, and beautiful gardens could be enchanting for the tourists. 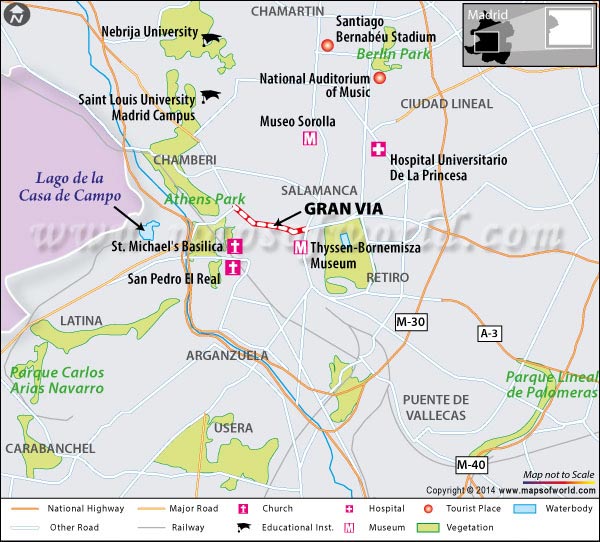 Location Map of Grand Via in Madrid, Spain

Facts about Gran Via

Where is Gran Via ?

The Gran Via is one of the most important streets of Madrid, Spain. It is nearer to Plaza de Cibeles and connects the Calle de Alcala and Plaza de Espana.

Best time to visit Gran Via

Winter is the best time to visit Gran Via in Madrid as the summer brings scorching heat, and winter has a pleasant aura.

More about Gran Via