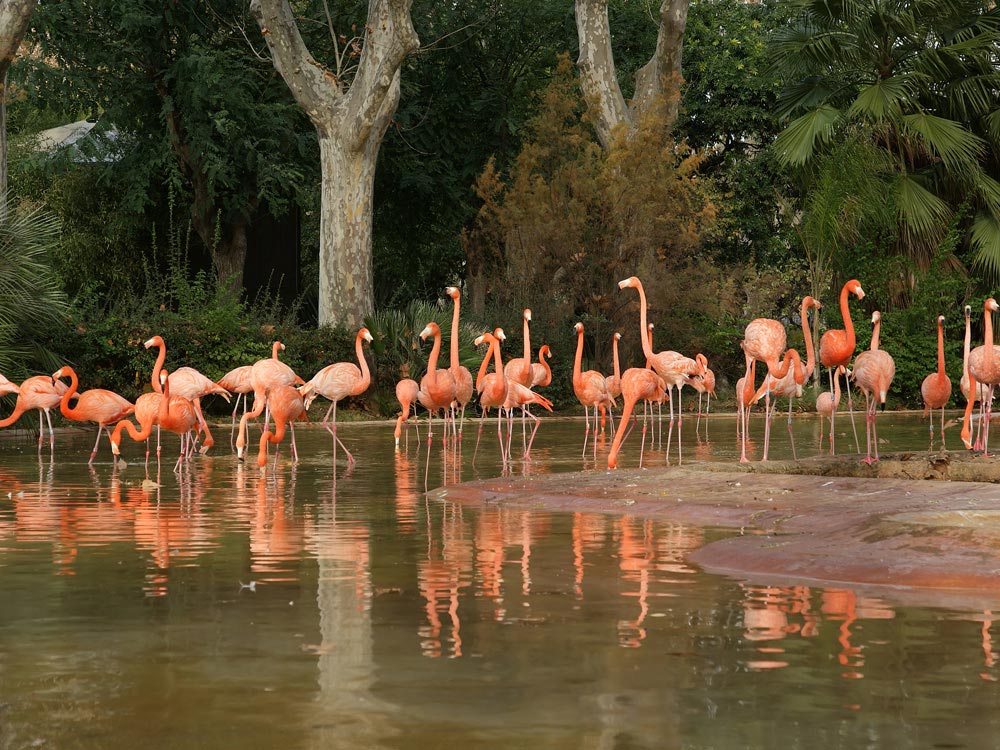 Flamingos at Barcelona Zoo in Spain

Barcelona Zoo is a wonderful tourist spot located in the heart of Barcelona, Spain. Here you can enjoy the spectacular sights of different species of flora and fauna from all over the world. Very few cities in the world can boast of a zoo that houses such unique animals and the Barcelona Zoo is among them. This zoo also takes pride in the humane facilities and the habitat it offers to the wild animals. The animals are kept in the open and are not caged. Another unique exhibit is “The Farm” where ponies, sheep and rabbits are kept. This exhibit allows wild life enthusiasts and children to go near and even touch the domesticated animals.

Special Sections at the Barcelona zoo:

The Komodos is a home to five animal species from the Asia-Pacific: the Komodo Dragon, the Java Sparrow, Muntjac deer, Pied Imperial Pigeon, and the Nicobar Pigeon.

The Small Primates Gallery houses small primates such as the white nosed monkey, the putty nosed monkey, the talapoin, the collared mangabey, the Brazza monkey, the red monkey, and the Siamang. The visitors see these primates enjoying and performing their daily activities while walking through a passage with glass walls.

The Reptile House has a special display of reptiles such as chameleons, poison dart frogs, dwarf crocodiles, small dragons, giant snakes (including pythons and boa) and iguanas in the Barcelona Zoo.

The dolphin shows and the killer whale shows held at Aquarama are the main attractions of the zoo. The dolphins give a wonderful performance at the glass windows of the pool. There is an infant zoo where children can enjoy observing different animals in their natural surrounding.

Other highlights of the zoo are the Titi monkey gallery, the Gorilla enclosure, The Farm, the Palmeral and the Aviary. The Barcelona Zoo also has an artificial mountain, somewhat similar in shape and size to the mystical Montserrat sierra. The zoo houses a wide variety of mammals including hippopotamus, white-naped mangabey, Spanish wolf, Saharan dorcas gazell, etc.

You can take a round of the zoo in the train or even hire an electric buggy. There are restaurants, shops, ponies, electric cars, and a mini-train within the zoo. Other than observing the wild animals, the children can enjoy riding on the ponies. 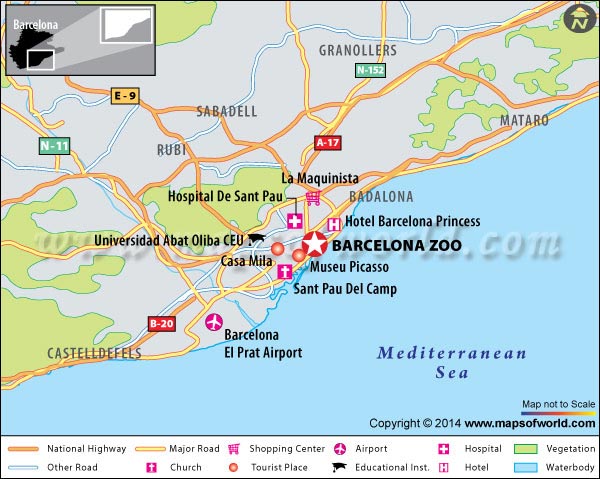 Where is Barcelona Zoo ?

An ideal place to observe the rare natural activities of the wild animals, the Barcelona Zoo is located in the Parc de la Ciutadella. Barcelona and Arc de Triomf are the nearest Metro stations. The zoo can be reached within 17 minutes by car from the Barcelona Airport.

The best time to visit Barcelona zoo is the beginning of summer and fall.

General ticket fee is as follows: