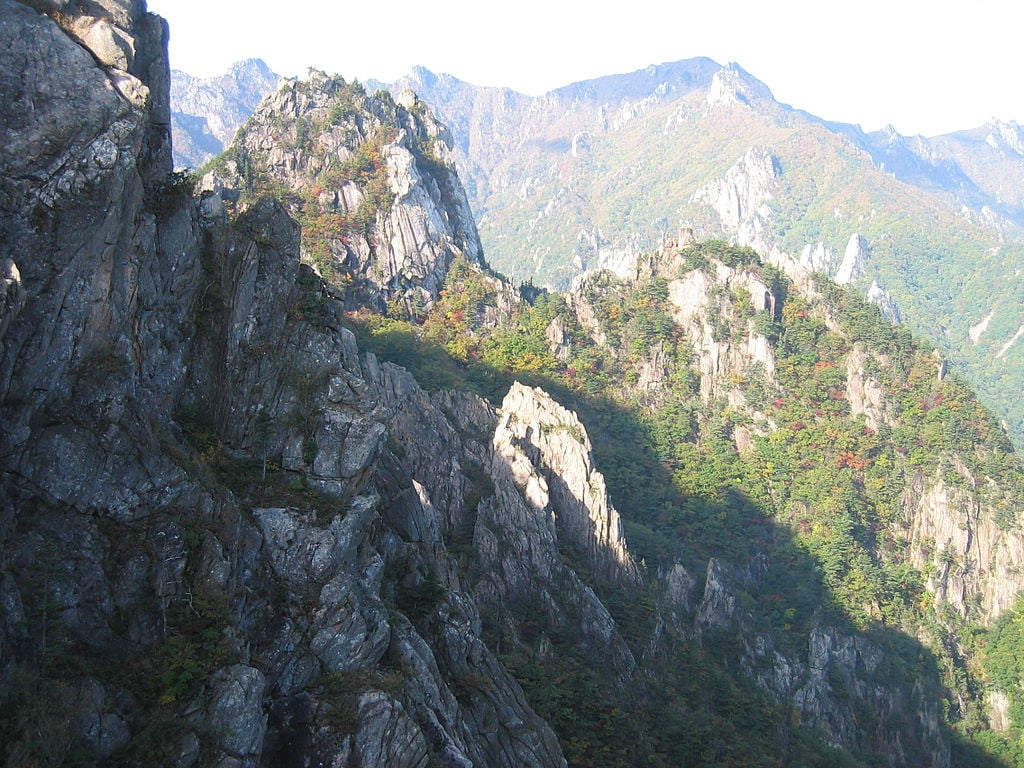 Spread across 398.539 square kilometers, the Seoraksan National Park features the mighty Mount Seoraksan (also known as Mt. Sorak) with ridges, peaks, valleys, waterfalls, flora, fauna, and a number of historical structures. This mountain is part of the Taebaek mountain range in the eastern part of South Korea. Its natural sights make it one of the most popular tourist destinations in the country.

As you enter through So Gong Won, the entrance gate to the Seoraksan National Park, you will be drawn towards the panoramic views of the Seoraksan Mountain. A day tour of Seoraksan usually involves sightseeing the Giant Bronze Buddha statue, Sinheungsa Temple, Gwongeumseong Fortress (after a wondrous cable car ride), Yongpyong Dragon Peak, and the Biseondae Cliff. If you have some more time or another day to spare, you can go on a hike to see the 7th-century Baekdamsa Temple.

Seoraksan is, in fact, a hiker’s paradise. It has numerous hiking courses on offer that lead to some of the most stunning and diverse landscapes, like the Biryong Falls, Daecheongbong Peak (highest in Seoraksan), Gongnyong Ridge, Ulsan Bawi rock formations, Heullimgol Valley, and Geumganggul Cave. The courses range from a day to three days, and are determined according to their difficulty level and distance. While hiking around you may spot a wide range of wildlife species like the Musk Deer and Koral Goral. The park is also home to over 1,400 rare species of plants.

Another popular activity in Seoraksan is camping. The administration has designated a few campsites just outside the park and shelters in strategic locations like in the Daecheonbong area inside the park, to allow campers and trekkers to enjoy the wilderness of Mount Seoraksan for a select number of days.

Another popular activity in Seoraksan is camping. The administration has designated a few campsites just outside the park and shelters in strategic locations like in the Daecheonbong area inside the park, to allow campers and trekkers to enjoy the wilderness of Mount Seoraksan for a select number of days.

Seoraksan is located in the Gangwon-Do province of South Korea.

How to get to Seoraksan National Park

It is best accessed by bus. To access Seoraksan, every visitor first needs to reach Sokcho, the nearest city to the national park. Sokcho is well connected with many nearby cities and towns in the country. There is a regular bus connection to Seoul from both the Seoul Express Bus Terminal and Dong Seoul Bus Terminal. It takes about three to four hours to reach Sokcho from Seoul by bus. From Sokcho, bus numbers 7 and 7-1 ply to the Seoraksan National Park Entrance Gate, also called So Gong Won. The journey takes about half an hour. The nearest airport to Seoraksan is the Yangyang Airport, and the nearest train station is the Gangneung Station.

Seoraksan displays distinctive and interesting features in each season. During the winter, the mountain is covered by snow and make for great snow trekking trails for adventure lovers. Summer temperatures are around 30 degrees centigrade, but the season is pleasant enough to tour Seoraksan. The rainy season, on the other hand, makes it difficult for hikers and rock climbers. During spring and autumn, seasonal trees are in full bloom, and thus these two seasons are considered as the best times to visit the national park. Autumn is the peak season as the views are more colorful and weather is warmer than in spring. If you wish to avoid crowds, it is best to visit Seoraksan during the weekdays.

Seoraksan can be visited any time all round the year. Different operations, like the cable car, inside the national park is open only during certain day hours. The following is the schedule of the operating hours for the cable car in the different months of the year–

Note: Bad weather conditions can also suspend the operations. So, it is best to make inquiries before you embark on your sightseeing journey.

Entrance to the Seoraksan National Park is free. The counter at So Gong Won gives out brochures and maps of trail routes and popular attractions.

If you wish to take the cable car to visit the Gwongeumseong Fortress, a round trip costs about 9,000 won for an adult and 6,000 won for a child between the age of 4 and 13.

Hikers and campers can hire blankets at 1,000 won and sleeping bags at 2,000 won, and reserve space in shelters in the park for overnight stay and resting. Price for resting in shelters varies according to season (7,000 won during off-season, and 8,000 won during peak season).

What are the coordinates of the Seoraksan mountain?