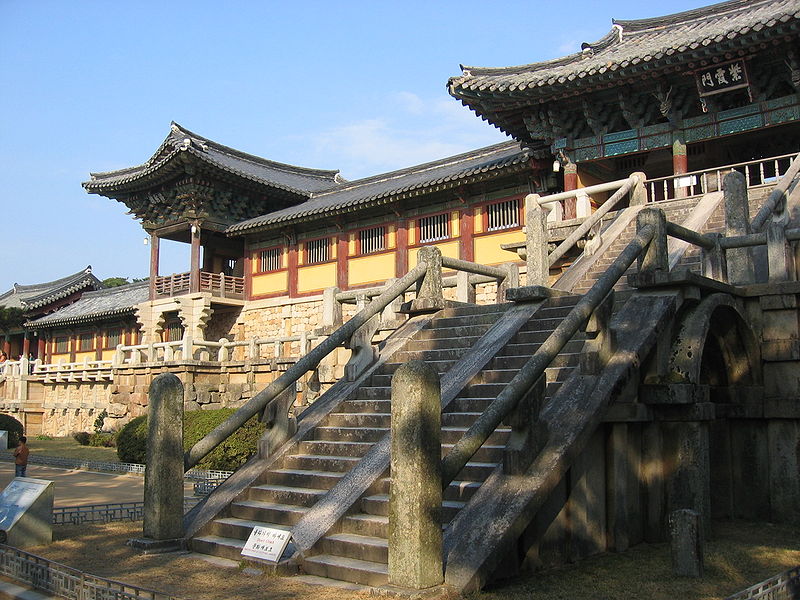 Bulguksa is often regarded as the ‘Museum Without Walls’

Very few structures around the world can match the architectural beauty and aesthetic appeal of the Bulguksa Temple in South Korea. Located in Gyeongju city, often referred as the ‘Museum Without Walls’, this 8th-century Buddhist temple is a delicately constructed masterpiece. The temple is known for its immense religious significance. The wooden structure of the temple rests on a raised platform of stone. At this temple complex, you experience the spiritual enlightenment your soul yearns for.

The construction of the Temple started during the reign of King Beop-Heung of Silla Kingdom in 5th century AD. It was completed in 774 AD under the dominion of King Hye-Gong and got its present name – Bulguksa Temple. Several renovations took place over the next few centuries. Bulguksa is believed to be designed by the legendary architect Kim Daeseong. UNESCO enlisted this temple and the Seokguram Grotto as a World Heritage Site in 1995.

What to Do at Bulguksa Temple ?

Visiting Bulguksa Temple is akin to witnessing the richness of Buddhist art along with the ancient culture and architectural assets. The temple complex houses relics including Seokgatap and Dabotap (two of the most valued pagodas in the country), the Golden-seated Amita Figure, and the Vairocana Buddhist Figure.

Theses two relics were designated as the national treasure of Korea in 1962. The Dabotap and Seokgatap pagodas stand at a height of 10.4 meters and 8.2 meters respectively. These two relics separate the Mauve Mist Gate called Jahamun and the hall housing the Sakyamuni Buddha known as Daeungjeon.

The stairway bridges such as Blue Cloud Bridge (Cheongungyo), the White Cloud Bridge (Baegungyo), the Lotus Flower Bridge, and the Seven Treasure Bridge tempt you to walk. An 18-step stone staircase to the west will lead you to Anyangmun, also known as ‘Pure Land Gate.’ As per the traditional beliefs, the stairs leading to this site could only be used by those who have attained enlightenment.

Do not forget to visit the Pavilion of Mount Meru – Beomyeongnu. It stands on the right of Baegungyo and Cheongungyo bridges. What’s unique about this pavilion are the stacked pillars facing each other in all four directions using eight stones of varying shapes and placement. You will spot a turtle structure carrying a drum atop its back. Built in 751 AD, the Pavilion of Mount Meru (Beomyeongnu) had to be renovated in 1973 as the Japanese damaged it in 1593 during the Imjin War.

Apart from the Temple and the Seokguram Grotto, the city of Gyeongju is home to several other awe-inspiring tourist attractions such as Gyeongju National Museum, Gyeongju National Park, Anapji Pond, Yangdong Folk Village, Bomun Lake, and Cheomseongdae Observatory.

Bulguksa Temple is in Gyeongju city of Gyeongbuk province in eastern South Korea.

By Air – The Ulsan International Airport is around 34 km from Bulguksa Temple and a one-and-a half-hour drive will take you there.

By Train – Use the Gyeongju train service and get down at Gyeongu station, follow the Hwarang-ro Street, and then take bus. An hour-long journey is enough to reach the Temple.

By Road – The Temple is well connected with the capital city of Seoul and other cities like Daegu, Pohang, and Busan. Bus takes four hours from Seoul to reach Gyeongju.

Sajo Resort Gyeongju, Valley Motel, Gyeongju Kolon Hotel are the most affordable accommodations near Bulguksa Temple. There are several hotels in Gyeongju matching the standards of both high-end and budget travelers.

Hawa Dhabha, Hongsi Korean Restaurant, Starbucks Gyeongju Bomunro, Sukyoung Sikdang, and Baru are some the most preferred food joints near and around Bulguksa Temple.

The best time to visit Bulguksa Temple is from April to October when the temperatures are moderate.