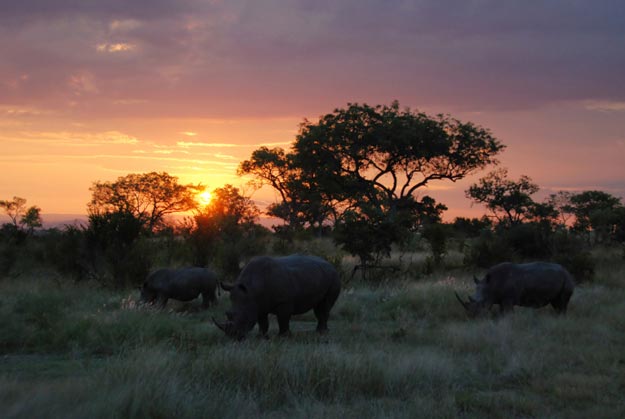 Only the thought of African bush conjures up some fascinating images of wondrous wilderness, sunrise safaris, and a natural retreat away from the burdens of urban monotony. Where every new trail brings goose bumps, Kruger National Park embodies the spirit and captures the essence of wild Africa. It remains unrivaled in the diversity of its life forms which is entwined with prehistoric archaeological treasures. Face off with an untamed beast, stay in a luxury lodge with rustic setting, map the undulating landscape on foot, and soak up the customs of the Bush people and their way of life.

The prehistoric people have inhabited the region dating as far back as 100,000 BC. The national park is named after Paul Kruger – the then president of the Transvaal Republic – who proclaimed it as Sabie Game Reserve in 1898. On May 31, 1926, Sabie and Shingwedzi game reserves were merged to form Kruger National Park.

Things to Do in Kruger National Park

Game Viewing – Spoil yourself with a bewitching array of fauna by joining guided game drives in the African bush. These game drives are offered by camps inside the park. Be an early bird to catch the tranquil atmosphere during morning drives. Come back to your camp to share anecdotes and have lunch before you again go back to search for grazers on the cool sunset drives. Cruise slowly to observe the nocturnal behavior of stalking predators on an adventurous night drive. While a morning drive lasts up to 3.5 hours, night drives are about two hours long.

Wilderness Trails – Take the road not often taken and scout around off-the-beaten tracks in Marula region to safely encounter the famed Big Five – lion, leopard, elephant, rhino, and buffalo – as well as cheetahs, hippos, crocodiles, and giraffes. Enjoy the spectacular views of deep quiet valleys and high rocky outcrops, spend a night or more in the back country with nothing but sounds of nature, and find a way through the Baobab forests to spot starlings, sunbirds, and hornbills. The Bushmans Trail, Napi Trail, Nyalaland Trail, Sweni Trail, and Wolhuter Trail are the most coveted three-day-long walking safaris in Kruger National Park.

Other Outdoor Thrills – Visit the carved rock paintings of the Bush people, go on birding from bushveld camps, chase your thrills by mountain biking near Olifants camp, experience the magic of a hot air balloon safari from Hoedspruit, and learn how to prepare a traditional South African braai (outdoor barbeque). For a sophisticated change, make a hole-in-one at the Skukuza Golf Course.

Shopping – Some of the private lodges have small shops that sell a limited range of jewelry, t-shirts, gift items, handicrafts, souvenir, and curios.

The national park is spread across two provinces of Limpopo and Mpumalanga in northeastern South Africa. Its Paul Kruger and Phalaborwa gate are located 285 miles (460km) and 304 miles (490km) from Johannesburg respectively.

By Air – Kruger Mpumalanga International Airport (MQP) near Nelspruit (recently renamed as Mbombela) is the gateway to the national park. It is served by regular flights from Johannesburg, Cape Town, and Durban. The towns of Phalaborwa and Hoedspruit have secondary airstrips close to the entrance of the park. Daily charter flights, which take about 90 minutes, can be boarded from O. R. Tambo International Airport (JNB) in Johannesburg.

By Train – Train station in Phalaborwa and Nelspruit are connected to Pretoria and Johannesburg via Transnet Freight Rail.

By Road – As the national access roads (N1 and N4) leading to the entrance gates are paved, you can hire a car from one of the nearest airports or Johannesburg.

In Nelspruit, Costa do Sol specializes in European cuisine and Zest Restaurant favors seasonal produce. In Phalaborwa, Yurok Spur dishes out steaks, burgers, and ribs and Buffalo Pub & Grill is a popular place to wet your whistle. Fast food chains like Wimpy, KFC, and Nando’s have restaurants nearby.

Although each season brings its own highlights, game viewing in the Kruger National Park is best during the dry winter months from April to September. Early morning and late afternoon is the ideal time to be out when animals are most active.