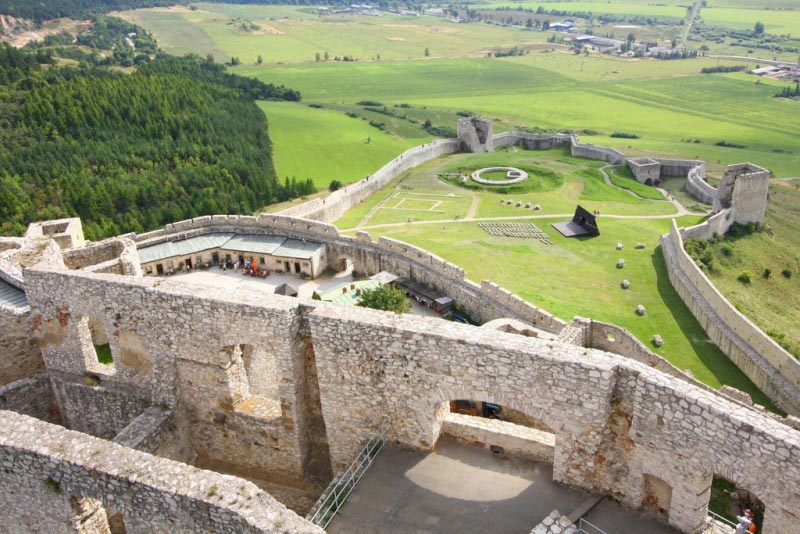 Levoca and Spis Castle (or Spissky Hrad) at Slovakia, Europe

Levoca and Spis Castle are part of a UNESCO World Heritage Site located in Slovakia, Europe. A well-preserved collection of buildings once used for military, political, and religious purposes, the World Heritage Site features Romanesque and Gothic architectural styles. The region was a Saxon colony from the Middle Ages, and is an important cultural center in Eastern Europe.

Spis Castle (or Spissky Hrad) was one of the largest castles in Eastern Europe, set above the towns of Spisske Podhradie and Zehra, also part of the UNESCO site. Spis Castle once served as the capital of Szepes (Spis) county. The castle was first built in the 12th century, but that construction collapsed because it was built along fault lines. The castle that stands today was built in the early 13 century to defend against Tatar invasions. The palace was completed in 1249, while the keep was finished in 1270. A Gothic chapel was added in 1470. The palace was home to noble families, like the Szapolyai (or Zapolya, one-time king of Hungary) family until 1528, the Thurzo family from 1531 to 1635, and the Csaky family (1638-1945). Today, the castle is in ruins from a fire in 1780, though it was partially reconstructed in the late 20th century, and the government owns and maintains the grounds.

Excavations on the castle have uncovered a moat and other buildings, like the Captain’s home and buildings from the Puchov culture.

In 2009, the historic center of Levoca was added to the UNESCO World Heritage Site for its Renaissance buildings, surrounded by city walls, with the gates to the city: Kosice Gate, Menhard Gate, and Polish Gate. Levoca’s Church of St. James is home to a famous altar constructed by Master Paul. Constructed from wood in 1520, Master Paul’s altar is Europe’s highest wooden altar. The Church of St James is famous in its own right for being the second largest church in Slovakia, made of 10 altars, constructed throughout the 15th and 16th centuries.

Other sites in Levoca are the Old Town Hall, built from the 15th to 17th century, the Luthern church, built in 1837, and the Cage of Shame – a wrought iron cage once used as a form of public punishment.

Spisske Podhradie, a settlement below the castle, was home to merchants. It contained a church that was destroyed by the Tatars, and was rebuilt in 1258 to 1273. Its reconstruction was done in the Romanesque style by the same builders who constructed the first version of the castle. The town was rebuilt around the Church of the Blessed Virgin Mary. In its heyday in the 15th century, Spisske Podhradie was a major textile producer for the region.

The town of Zehra was an early Slovak settlement in the area, and part of the castle. The site includes the Church of the Holy Spirit, notable for its medieval frescoes.

Where is Spis Castle & Levoca?

Spis Castle and Levoca are located in western Slovakia. Visitors can travel to Levoca via bus from any of the nearby major cities in Slovakia. From Levoca, there are public buses to visit Spis Castle, but there is a steep climb to get to the top of the hill where the castle is situated.

Visitors are not generally advised to go to Spis Castle during winter – the indoor exhibit closes from November through February. Summer is also recommended because it offers events like shows with knights and festivals.