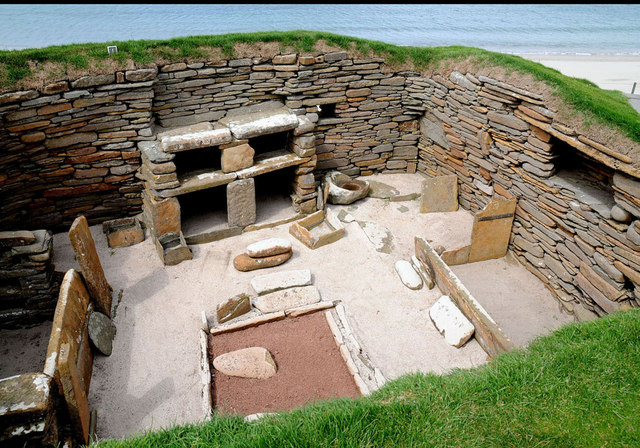 An ancient dwelling at the prehistoric village of Skara Brae

The Prehistoric village of Skara Brae is situated near the white sand beach of the Bay of Skaill. In the winter of 1850, a storm revealed the Europe’s best-preserved ruins of the Neolithic village that portray the life of the people about 5,000 years ago. The monuments are even older than the Stonehenge and the Pyramids.

The people in the Neolithic age were masters in construction. The sunken houses could be reached by passing through a door (wooden or stone slab), secured with a wood or whalebone bar. It also provided privacy to the inhabitants. The ancient homes featured stone beds, dressers, and seats.

For storage, the arrangement was done behind the walls of the House Number 5. There was also a secured space behind the hair dresser. The more accessible storage was used to store the everyday use items such as pottery, etc. These houses were connected via narrow, covered lanes.

There is a building in the settlement, which can’t be called a house, as it is deprived of the beds and a dresser. Marked as Structure 8, this building, probably, was used as a workshop for making stone tools or possibly for pottery.

During the winters, due to the harsh weather, the cafe near the village doesn’t open frequently. You may buy souvenirs from the gift shop that sells local items.

The Skara Brae has an informative visitor center that shares valuable information via touch screen presentations, and investigatory quizzes for both the children and adults. It also houses artefacts found out during archeological excavations performed in the 1970s.

Where is Skara Brae ?

The Skara Brae is located about 31 km northwest of Kirkwall, in the archipelago of the Orkney Islands, Scotland. The Kirkwall Airport is just 20.4 miles away from the historical site via B9055 and A965 routes.
Address: Sandwick, Orkney, KW16 3LR, United Kingdom

The best time to visit the Skara Brae is during the summers, when the weather is idyllic.

During the summers, from April 1 to September 30, the Neolithic Settlement opens from Mondays through Sundays, from 9:30 a.m. to 5:30 p.m.; while during the winters, from October 1 through March 31, it closes one hour early, at 4:30 p.m.