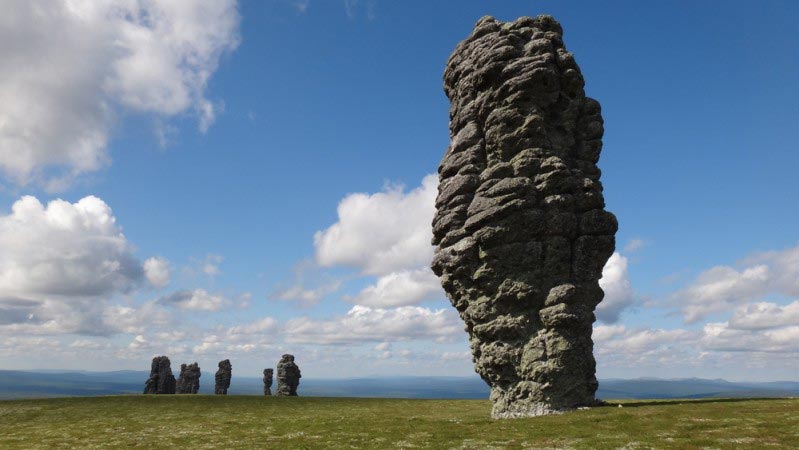 The Manpupuner rock formations are a breathtaking natural attraction located in the Komi Republic region of Russia. The seven towering pillars are one of the most spectacular geographic formations discovered by humans. It is difficult to guess how they arrived there, and how they are still standing. It is believed that the rock formations evolved as a result of the weathering of rocks.The appearance of these formations has also changed due to the weather. The word Manpupuner (Man-Pupu-Nyer) means the ‘Small mountain of idols’ in the Mansi language.

According to an ancient Russian legend, the Manpupuner rock formations were once a group of Samoyedic giants heading towards Siberia with the intent of calling the Vogulsky people to war. The sight of the holy Vogulsky Mountains made their leader drop his drum, and turned them into these giant monoliths exuding massive power and a stern department.

It is often suspected that the Manpupuner rock formations were built by the Mansi community which inhabited the Troitsko-Pechersk district of Russia, north of the Ural mountains, but it seems more likely that they are the result of frost and weathering on what may have been huge boulders or mounds.

The existence of many legends among the Mansi, the Kopi, and the Russians are evidence of the fact that these stone giants have captured the imaginations of people since ancient times. The Manpupuner rock formations have come a long way from being a sacred place of worship to becoming a great tourist destination.

Where is Manpupuner Rock Formations?

The Manpupuner rock formations or the Pillars of Weathering are located north of the Ural Mountains in the Troitsko-Pechorsky District of the Komi Republic in Russia. While many tourists prefer to take a helicopter from Syktyvkar, the capital of Komi, others prefer the boat and trek route that takes about a week from the capital city.

The Manpupuner rock formations are best visited in the winter, as the pillars and the surrounding landscape are covered in ice and are beautiful. Trekking may be replaced by skiing at this time. However, in Russia winter months experience bitter cold, thus the month of August is the perfect time for beginners.