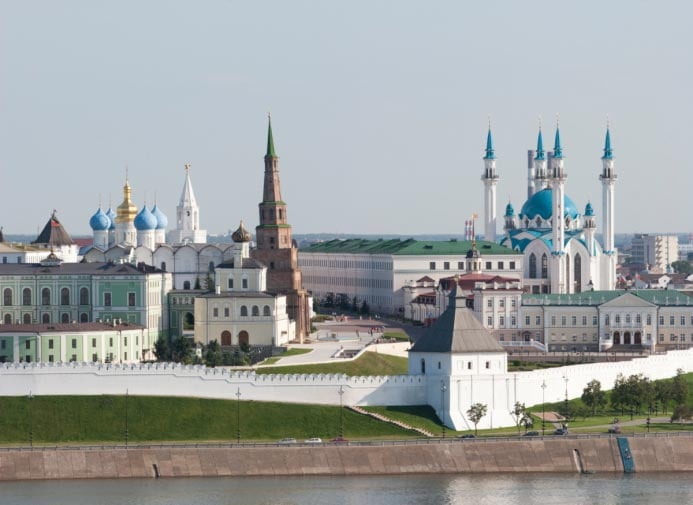 Kazan Kremlin – a complex of several buildings in Kazan, Russia

Kazan Kremlin is a complex of several buildings in Kazan, Russia, noted for their architectural and historical value. A kremlin is a citadel and the seat of government of the city, and consists of churches and towers, and a palace. The Kazan Kremlin was the citadel of Tatarstan, which is a federal subject of the Russian Federation. Constructed under the orders of Ivan the Terrible, and built among the remains of the Kazan Khanate.

The white Kremlin features the Annunciation Cathedral, the only sixteenth-century Russian church to have 6 piers and 5 apses. Built from 1554 to 1562, the cathedral is made from pale sandstone. Its bell tower was modeled after Moscow’s Ivan the Great Belltower but the Kazan bell tower was torn down by the Soviets in 1930.

Another important building in the Kazan Kremlin is the Söyembikä Tower, also known as the Khan’s Mosque. Once the tallest structure in the kremlin and a leaning tower, with a lean of 194 centimeters (76 inches), it was straightened in the 1930s and again in the 1990s. This tower was possibly built in the 17th or 18th century, though its origins are not well understood. A legend has it that the tower was named for a queen named Söyembikä who killed herself jumping from the top of the tower, but the legend is not rooted in facts.

Spasskaya Tower on the southern end of the Kremlin serves as the main entrance to the Kremlin. Several white towers in the complex were built in the 16th and 17th centuries, including the Secret Tower that once housed a secret water supply.

Qol-Sarif Mosque is a site of remarkable architecture in the Kazan Kremlin, and was the largest mosque in Europe. First opened on June 24, 2005 with a large celebration, the mosque is built within the citadel, on a site that held Kazan Khanate’s mosque before 1552. The grand cathedral is white with a blue roof.

The Governor’s House, built from 1843 to 1853, was designed by Konstantin Thon. Today, it serves as the Palace of the President.

Buildings that once were included in the Kremlin were the Church of St. Nicholas and the Cathedral of the Saviour’s Transfiguration, which were destroyed during the rule of Joseph Stalin.

Where is Kazan Kremlin ?

Kazan Kremlin is located in Kazan (Russia) which is the capital of the Republic of Tatarstan. Kazan is also the capital of the Tartar culture worldwide. The city is served by an international airport, though it is located far from the city itself. A better bet to get into Kazan is by train from Moscow or St. Petersberg, though it is still far from these cities. Within the city, walking or taking buses are the ways to get around town.

Late spring to early fall are the best times to visit Kazan for warmer weather, though July gets quite hot. Recently voted Russia’s sports capital, Kazan will be hosting athletic events, including the 2018 FIFA World Cup.