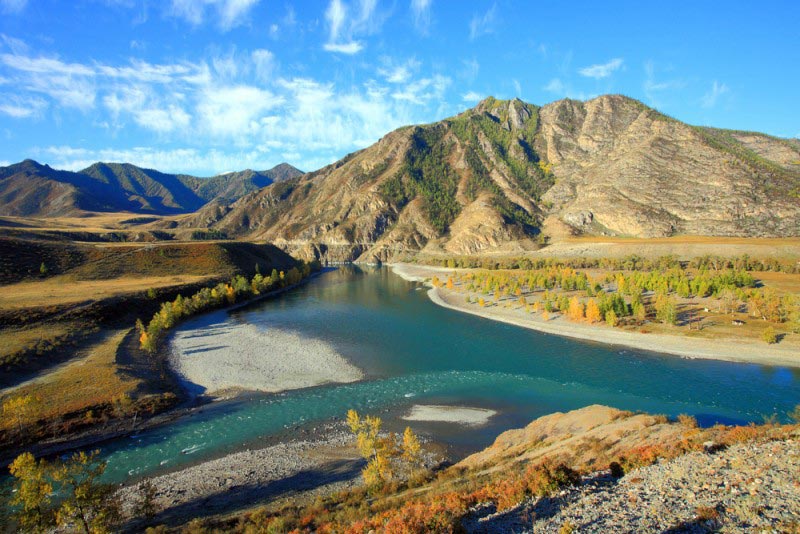 The Golden Mountains of Altai are noted for their high level of biodiversity and a variety of vegetation zones, from steppe and forest-steppe, to mixed forest, subalpine vegetation, and alpine vegetation. The region is a habitat for endangered species including the snow leopard.

Humans have inhabited the region for almost a million years, with Paleolithic settlements found in the Gorno-Altaisk region. The mountains have been the site of tribal unions, khanates, and empires ranging from the Scythians, to the Turks, Uigurs, Yenissey Kirgiz, Kidans, Mongols, and Oitrats. The local people are Russians and the Altaisky, who are Turkish-speaking hunter-gatherer people who continue to live in the natural environment.

Within the site, Katun Nature Reserve which was established in 1991 and joined the Golden Mountains designation in 1998, is home to 700 plant varieties, 51 mammal species, 140 bird species and various reptiles and fish. Ecosystems contained in this portion include glaciers, alpine tundra, meadows, and forests.

Where is Altai Mountains ?

The Golden Mountains of Altai are located in Russia’s southern Siberia region, along the borders to Kazakhstan, China, and Mongolia. Special permits, which must be acquired in advance, are required to travel to parts of the Golden Mountain area, particularly border regions. The main towns in the region are Chemal, Aktash, and Ust-kan. Many visitors join a tour of the region or arrive by bus or taxi from Biysk and Barnaul.

Visitors wishing to camp along the shores of Teletskoye Lake or along the rivers must arrive during summer, when the weather is warmest. Most common activities are best for warm weather, including hunting, fishing, river rafting, kayaking, and rock climbing. The area remains quite underdeveloped, and winter travel to the region is not advised.