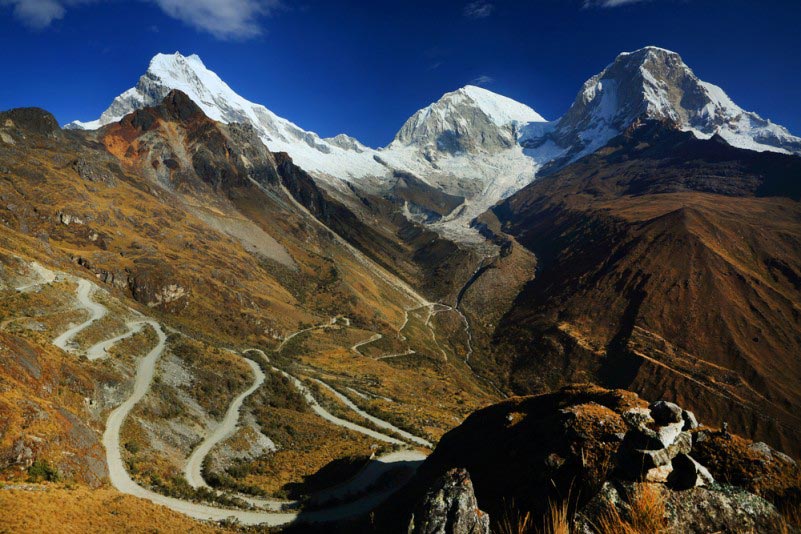 Huascaran National Park is a preserved wilderness area of Peru, located in the Andes, and covering the majority of the Cordillera Blanca (meaning “white mountain”) range. This national park is home to a variety of geographic features, including high peaks covered in snow, deep canyons and rivers flowing from the 80 glaciers in the mountains, about 120 large glacial lakes, and waterfalls. Huascarán has the highest tropical mountain range in the world, with 27 peaks about 6,000 meters (almost 20,000 feet) above sea level.

The park is also a habitat for a variety of animal species, including many endemic Andean creatures, some endangered, like the Peruvian guemal (or huemal), a native deer, the vicuña, and colocolo, a wild cat. Other native animals are the Peruvian tapir, and the Peruvian puma or cougar. Birds found in the park include the cordillera hawk, Andean condor, and the giant hummingbird.

One endemic plant species living in the park is the Puya raimondii, the Queen of the Andes, which grows only at high elevations of around 3,000 to 5,000 meters (10,000 to 16,000 feet), and grow up to 10 meters (33 feet) high. This plant is the largest Bromeliad, and resembles an exotic cactus. It flowers once in its life, for just a few weeks before it dies, but lives about 100 years.

The native Chavin culture once inhabited this area of the Andes and the ruins of their civilization are at another UNESCO site nearby called Chavin de Huantar.

Where is Huascaran National Park?

Huascarán is part of the Andes Mountains, covering the Cordillera Blanca Range in the Sierra Central. The park is in the Ancash region of northern Peru, with major cities of the region being Huaraz and Chimbote. Bus tours are available from cities like Huaraz, and are a popular way to see the park. Otherwise, driving is the best option for flexibility and better access. Hiking and climbing the mountains are the most popular ways to get around within the park, with backpacking a great option to get the greatest experience of the park’s backcountry.

For those interested in climbing or trekking through the park, the appropriate months to visit are from about May to September for the best weather. Depending on the altitude of the peak, some can be climbed throughout the year.