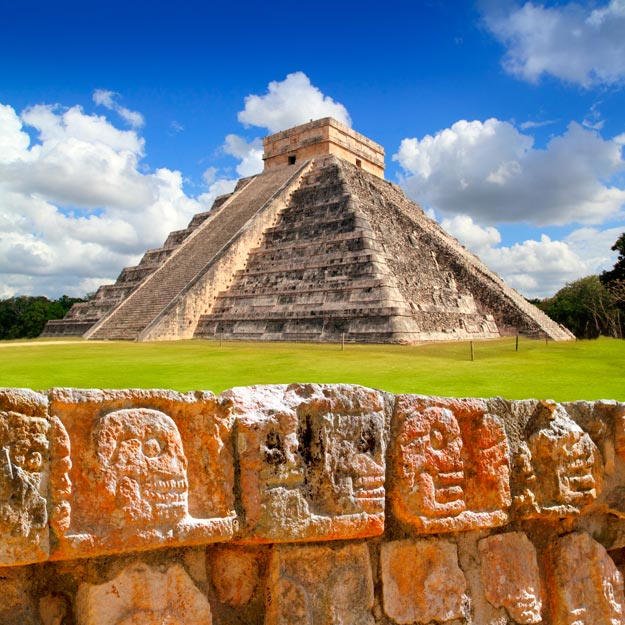 Chichen Itza is an archaeological site built by the Maya civilization of Mexico in 750 to 1200 AD. These ruins of an ancient city center offer insights into the civilization that created it, in their architectural styles and diverse features. The structures in the city include pyramids, sacred sites and temples, baths, and graves. The name Chichen Itza means ‘at the mouth of the well of Itza.’ There are several interesting sites in Chichen Itza:

The phrase Chichen Viejo means ‘old Chichen’. It is the oldest part of the city housing some of the structures that date back to pre-Toltec times.

Among the most famous parts of Chichen Itza is the Piramide de Kukulcan (also called El Castillo, the castle), a -pyramid that reflects the Maya civilization’s dedication to astronomy and the calendar. The pyramid has 365 steps to the top, one for each day of the year, and on the spring and autumnal equinoxes, observers can see a shadow in the shape of a snake slithering up the stones of the pyramid. There are 52 panels and 18 terraces in El Castillo.

El Caracol or ‘the Snail’ is an ancient observatory that resembles the shape of a snail. This structure proves that time and astronomy were the favorite fields of study for the Mayans. It was used by the astronomers to accurately measure and record significant days in the astronomical calendar.

Juego de Pelota Principal is the largest games court among the entire archeological sites of Mexico. Also called the Principal Ball Court, it is characterized by the famous stone hoops.

Also known as the Temple of the Jaguars, this temple is located to the southeast of the site. The Templo de los Jaguares features carved rattlesnakes and jaguars on the outer side while the murals depicting an ancient battle can be seen adoring the interior chamber of the temple.

Tzompantli in Toltec means ‘Temple of Skulls’. It is located in-between the Temple of Jaguars and the Castle. The heads of the sacrificed were displayed for the gods at the temple.

View map with pictures of 7 Wonders of the World

Where is Chichen Itza?

Chichen Itza is in the Yucatan region of Mexico, not far from the town of Piste. Tourist destinations Merida and Cancun are not far from the site, and tourists can take bus tours to Chichen Itza from those cities. The site doesn’t have its own airport, the tourists are required to fly down to Cancun or Cozumel and book a tour from these places.

Spring and autumn equinoxes provide a fascinating view of the Chichen Itza ruins, when visitors can catch a glimpse of the shadowy serpents. The ruins are open every day, but early morning and evening are good times to visit the site.

The entry ticket for the Chichen Itza archaeological site costs 57 pesos. It must be noted that the Yucatan State Government charges an additional fee of 125 pesos to Mexican visitors and 177 pesos to foreign visitors. The admission to the sound and light show costs 46 pesos for domestic visitors and 72 pesos for foreigners. If we calculate the total amount, it is less than USD 20.