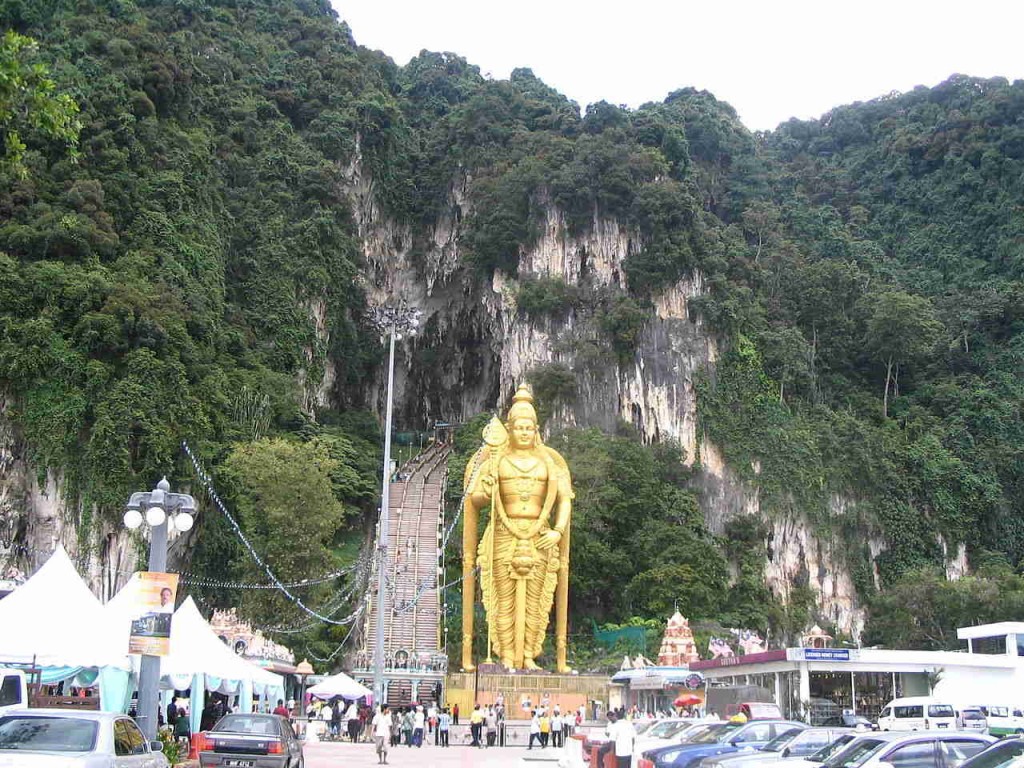 With over 160 routes, Batu Caves is a popular spot for rock climbing in Malaysia.

A scenic 30-minute drive from the heart of Kuala Lumpur takes you to a Hindu shrine in an enormous limestone outcrop called Batu Caves. This hill – riddled with cave patterns and inundated with monkeys – is a tailor-made place to gain insight into Malaysia’s deep and diverse religious roots. To put cherry on top, the labyrinth of spooky caverns is a haven for natural rock climbing experiences.

The caves are about 400 million years old and their entrances were used as shelters by the indigenous Temuan/Besisi people. An American naturalist, William Hornaday, surveyed the limestone hills in 1878. Later in 1890, an Indian trader, K. Thamboosamy Pillai, placed a statue of Sri Murugan Swami and promoted the caves as a place of worship.

Things to Do in Batu Caves

Caving – The temple complex consists of three main caves and a few relatively smaller ones. The Temple Cave or Cathedral Cave – which is the biggest of all – shelters several ornate Hindu shrines beneath its 100-m-high arched ceiling.
At the base of the hill, two more cave temples – Art Gallery Cave and Museum Cave – also feature Hindu statues and paintings.

Another sacred site, the Ramayana Cave, depicts the story of Lord Rama in a chronicled manner along its rugged walls. Just outside, there a temple dedicated to Hindu deity Hanuman greets the worshipers. The Dark Cave, which is a long network of pristine caverns, is a protected area.

Rock Climbing – With more than 160 climbing routes – on the limestone hills rising up to 150 meters – the region is popular for rock climbing in Malaysia. The routes often start from northeastern side of the Damai caves. While the Nyamuk Wall is renowned as the hardest and longest route in the region, first-timers should go for climbing on Damai Wall, Comic Wall, and Nanyang Wall. Take a three to four-hour- long adventure tour which involves getting wet, scaling rock faces, and squeezing past narrow potholes.

Festival – The caves serve as the focal point of the annual Hindu festival of Thaipusam. Celebrated here since 1892 in the Tamil month of Thai – which falls in late January or early February – it symbolizes the triumph of good over evil. Thousands of devotees carry their offerings, mostly containers of milk, to the Lord Murugan on meticulously decorated ‘kavadis’ (offering carried by a devotee).

Flora and Fauna – Blanketed with a green canopy, the region is home to troupes of long-tailed macaque monkeys fed by visitors — at times even involuntarily. Other animal species here are elephants, beetles, birds, spiders, and cave-dwelling bats.

By Air – Kuala Lumpur International Airport (KUL) is the nearest major airport from the caves. It is well-connected by flights from cities in Southeast Asia and rest of the world.

By Road – The site may also be reached by public transportation: Bus 11/11d from Bangkok Bank Terminus or bus U6 from Titiwangsa.

June through August is the ideal time to visit Kuala Lumpur. If you’re not particularly fond of crowd, then plan a visit in the low seasons of February to March and September to early November.

Being a site heavily influenced with Indian culture, you can taste a tasty Indian curry complemented with rice and papadum served on a banana leaf. Take a break from vegetarian cuisine and head to downtown Kuala Lumpur that features wide selection of European and Pan-Asian cuisine in fine-dining restaurants and posh restobars. Nasi lemak, Bak-kut-teh, and Char Kuey Teow are tantalizing traditional delicacies to try. Relish the panoramic views from floor-to-ceiling windows in Marini’s on 57 Restaurant or savor the Indochinese meals in Madam Kwan’s.