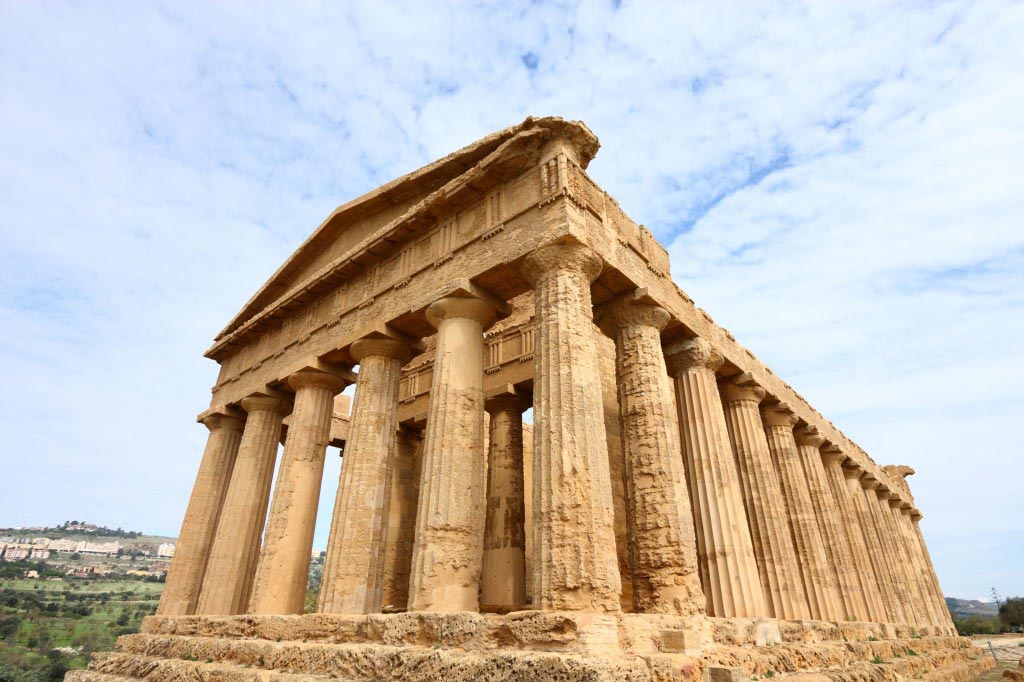 Temple of Concordia at the Valley of Temples, Sicily

Valle dei Templi, meaning Valley of the Temples, is an archaeological site containing the well preserved ruins of Doric (old, simple Greek architecture) temples, located in Agrigento on the Italian island of Sicily. The collection of temples are the main attraction of Agrigento, which was once one of the greatest cities in the Mediterranean because of its great location on the southern Sicilian coast. A prosperous market city, Agrigento was settled by the Greeks as early as the 7th century BC. The city, then called Akragas, had a thriving community, but the Carthaginian arrived and sacked the city in 406 BC, destroying many of these temples. The city later fell to the Romans in 262 BC, becoming part of the Roman Empire.

There are several temples at the site, in various degrees of preservation. The Temple of Heracles (Tempio di Ercole) is the oldest of these temples, constructed during the 6th century BC. The Temple of Concordia (Tempio della Concordia) is the best preserved, though it was built in 440-450 BC, it later served as a church and is still mostly intact.

Atop the ridge is the Temple of Juno (Tempio di Giunone), once a ceremonial site for weddings, it was built in the 5th century BC and burnt down by the Carthaginians in 406 BC. The Temple of the Olympian Zeus was built in 480 BC in celebration of the victory over Carthage.

On the western side of the site lies the Temple of Jupiter (Tempio di Giove), which was never completed and lies in ruins. Additionally, there is the Tempio di Dioscuri (twins Castor and Pollux), a small but important temple, with only 4 columns remaining.

The (Tomb of Theron) Tomba di Terone was from Roman times but designed in the Grecian style, and was probably a monument for those killed in the Second Punic War.

Excavations of the area were undertaken and much was uncovered from the residential regions of the city, including Christian cemeteries and homes with mosaic tiled floors. To learn more about the history of the city and view artifacts removed from the Valle de Templi, head to the Archaeological Museum in town.

Where is Valle dei Templi?

To get around town, the city center is not very large and can be accessed on foot fairly easily. However, if it is especially hot, visitors may want to make use of the buses that run around town.

Agrigento gets quite hot and dry in the summer, and since there isn’t much shade at the site, aside from some trees and the shadows created by the monuments visitors should avoid going in the dead of summer when temperatures rise. If the heat is unavoidable, an umbrella and plenty of sunscreen are recommended accessories. Spring and fall are likely the best times to visit the site.

The temples are open from about 8:30 am to 7 pm every day, though admittance ends a half an hour before closing.

The cost for entrance to the temples is about 10 euro. Audio guides are available and will greatly add to the experience if you’re not familiar with the history – but they cost extra.